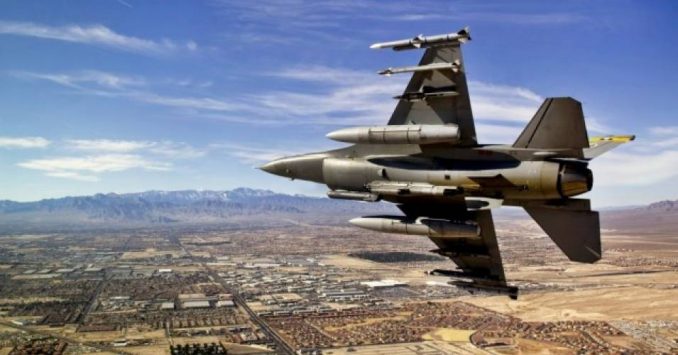 A U.S. fighter jet during practice maneuvers over the desert.

Our regular readers know this paper considers Donald Trump a racist, xenophobic, Islamophobic misogynist, a billionaire capitalist who inflated his inherited fortune by building casinos, manipulating real estate and short-changing workers. The worst fascists worldwide are drawn to his campaign, hoping to grow in its wake.

What about when Trump talks peace? It’s just demagogy. His alleged opposition to the invasion of Iraq came long after it happened. He is as apt as his rival to push the war button.

We want to make our position clear, because the corporate media have spun some of the comments in the Oct. 9 presidential debate in a perverse way: They attack Trump for lashing out at Hillary Clinton’s warmongering.

In the framework of the debate, Clinton was identified with voting for the war on Iraq, pushing the war against Libya — she reveled over Moammar Gadhafi’s murder — leading the charge against Syria and casting Russia as U.S. enemy No. 1.

Trump said that Iraq was a disaster. (It certainly was for the Iraqis.) He said Libya was a “failed state” where ­al-Qaida-like militias run the show. He said that the Islamic State group and al-Qaida were the opposition in Syria. He suggested an accord with Russia to fight these “terrorists.”

Clinton, other Democratic politicians and the bulk of the corporate media leapt all over Trump for being too close to the Russians, too soft on Syrian President Bashar al-Assad, etc.

Here is where the danger exists. The insistence of these media — which for the most part support Clinton against Trump — can lead to two possible politi­cal errors for those who are both anti-racist and anti-imperialist. We should avoid these errors.

One is to condemn Russia and Syria because you think this pig Trump is with them. No. He isn’t. Russia and the Syrian government are defending Syria’s sovereignty against what is really a concerted imperialist attack. Trump sees an opportunity to profit from people’s weariness with a costly, unpopular war.

The other is to believe that somehow Trump is the “lesser evil” because on Sunday he exposed Clinton’s warmongering. That would be completely wishful thinking and would destroy solidarity with those in the U.S. who are resisting racism and Islamophobia — who will be the best fighters against the next war.

Neither of these candidates is a “lesser evil,” and whichever of them wins the election will have to be battled in the shops, schools, hospitals, plants and streets.