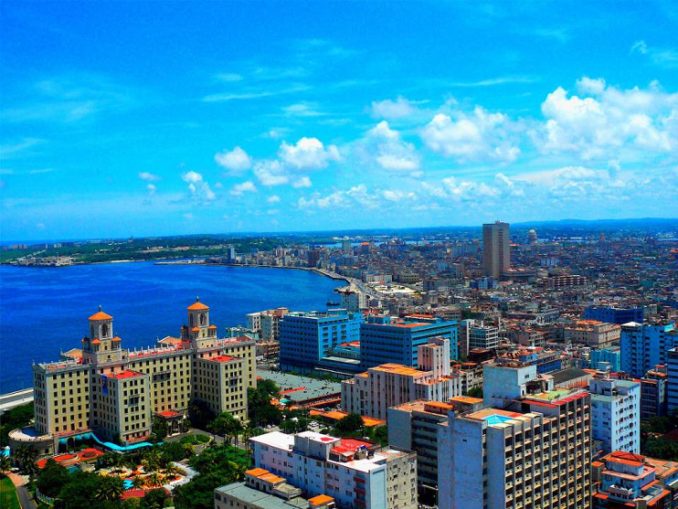 Despite ongoing bilateral discussions and mutually beneficial agreements between the U.S. and Cuba following the Dec. 17, 2014, announcement by both countries that restored diplomatic relations, the U.S. has continued funding and promoting programs intended to undermine and overturn the socialist economic relations chosen by the Cuban people.

The wpfwfm.org Haitian radio program Konbit Lakay reported Sept. 24 on the growing crisis at the Mexican border due to the Obama administration’s decision to reject thousands of Haitian refugees there and to step up deportations. The host compared these hostile actions to the preferential status accorded to Cubans entering the U.S.

The 1966 Cuban Adjustment Act automatically considers all Cubans to be refugees, affording them social benefits and legal permanent residency status after remaining a year in the U.S. In 1995 the U.S. instituted the wet foot/dry foot policy, stating that if Cubans made it to the U.S. shore by boat they would be considered refugees. Those intercepted at sea would be returned to Cuba. The application of the CAA and wet foot/dry foot are both applied at the discretion of the U.S. president.

Another continuing violation of Cuban sovereignty is the Cuban Medical Professional Parole program in effect since 2006. (tinyurl.com/CMPPprogram) Wholly at the discretion of the president, this brain drain entices medical professionals who enjoyed free education in Cuba to abandon internationalist missions and come to the U.S. Many who accept the bait find it is extremely difficult to get their U.S. medical license. (newswork.org, March 24)

U.S. tax dollars urgently needed for human needs from Flint, Mich., to Appalachia are allocated to subversive programs in Cuba, without Cuba’s approval or consent. The United States Agency for International Development reports: “United States Congress appropriated $55 million for Cuba programs between fiscal years 2009-2011; USAID managed nearly $31 million of this amount, while the Department of State managed the remainder. Also, $20 million has been appropriated for fiscal year 2012.” (April 1, 2011) The so-called National Endowment for Democracy allocated more than $3 million in 2015 alone. (ned.org)

Cuban youth rallied to expose the innocent-sounding World Learning Program and the Summer Leadership Program for Cuban Youth grant, which is funded by the U.S. State Department. On Sept. 28 students in Santiago de Cuba and in Ciego de Avila condemned U.S. government maneuvers that attempt to manipulate Cuban youth. An article in Granma points out these projects are “aimed at creating supposed opinion leaders and agents of change which have nothing in common with the Cuban Revolution’s social project. …

“[Federation of University Students] President Abel Mayea categorically stated: ‘There are no ulterior motives in the scholarships awarded. It’s clear that they want to subdue us. Cuba is not opposed to exchanges, but these must be undertaken with respect and with complete adherence to institutionality. They won’t be able to offer us more than what the Revolution has given us in 58 years.’” (Sept. 29)

The Cuban constitution guarantees the right to education, and 23 percent of Cuba’s national budget is devoted to it. One soon-to-be graduate civil engineer pointed out that “in these five years our Revolution has guaranteed all my studies, free of charge, which is why we don’t need any scholarships from the U.S.”

Cuba’s Director of U.S. Affairs Josefina Vidal said in an Oct. 1 Q&A session on Twitter, “We insisted once again that the financing of programs aimed at provoking internal change in Cuba needs to be eliminated, which would be an essential step toward normalizing bilateral relations.”

For the 25th consecutive year the United Nations General Assembly will vote in favor of Cuba’s resolution: “Necessity of ending the economic, commercial and financial blockade imposed by the U.S. against Cuba.”