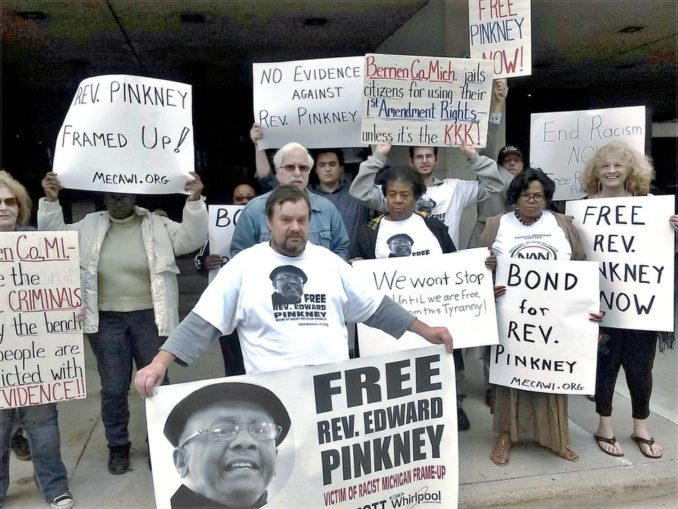 Supporters of Rev. Edward Pinkney demonstrate in Grand Rapids, Mich., demanding he be released on bond.

The Rev. Edward Pinkney, political prisoner, was transferred on Sept. 7 from the Marquette Branch Prison in the far north of Michigan’s Upper Peninsula. Some 11 months after arriving at that prison and suffering months of threats and abuse from guards, he was sent to West Shoreline Correctional Facility outside of Muskegon. His new location is only 90 miles from the home of his spouse, Dorothy Pinkney. The distance to Marquette, in comparison, was 500 miles.

Rev. Pinkney has now served 22 months of his 30-month minimum sentence. On Dec. 15, 2014, he was given a 2 ½ to 10 year sentence for supposedly altering dates on a recall petition against then Mayor James Hightower of Benton Harbor, Mich. Rev. Pinkney was convicted with no evidence, simply for being the leader of the recall effort and a well-known activist in his home town. His case has drawn the support of the American Civil Liberties Union and the National Lawyers Guild, as well as many groups and individuals across Michigan.

Attorney Tim Holloway filed an “Application for Leave to Appeal” with the Michigan Supreme Court on Rev. Pinkney’s behalf on Sept. 3. This reporter visited Rev. Pinkney at his new location on Sept. 30 and asked him about his long sought after transfer. He acknowledged the efforts of his supporters, who worked tirelessly to draw attention to the mistreatment, harassment and abuse he faced every day in Marquette Prison.

This campaign included picketing the Michigan Department of Corrections in Lansing, protesting across the state, including outside Marquette’s prison gate, contacting state legislators to intervene for Rev. Pinkney’s safety and telephone barrages to Gov. Snyder and Heidi Washington, MDOC director.

‘They wanted to get rid of me’

According to Rev. Pinkney, “What I think was the final straw was when state Rep. Dave Pagel showed up at Marquette Prison during the last week of August. He is the chairperson of the House Appropriations Subcommittee on the Department of Corrections. And the first thing he did was to ask to see me! This kind of blew the minds of the prison officials.

“I talked with Pagel in the law library for quite a while,” explained Rev. Pinkney. “After he left, my prison counselor wanted to know how I had so much ‘juice.’ I asked her if she wanted me to get her a raise or, maybe, a promotion.”

Less than two weeks later, Rev. Pinkney was told to pack his things because he was leaving the next morning. “They wanted to get rid of me and all the scrutiny that comes with housing a political prisoner,” he stressed.

Even with a possible appeal to the Michigan Supreme Court, which will take many months, Rev. Pinkney is looking for his earliest release to occur in June 2017. He is enjoying many more visitors already — and his supporters are not letting up on their organizing.

Detroit activists from the Michigan Emergency Committee Against War & Injustice (MECAWI.org), the Moratorium Now! Coalition Against Foreclosures, and the Detroit Active and Retired Employees Association joined together on Sept. 23 to carry out an all-day fish fry fundraiser for Rev. Pinkney’s defense. It raised hundreds of dollars.

Plans are also in place to distribute leaflets about Rev. Pinkney at a regional conference of Amnesty International in Dearborn, Mich., on Oct. 8.

Rev. Pinkney will celebrate another birthday behind bars. Oct. 27 is his 68th birthday. A campaign is underway to have hundreds of people send hundreds of cards and letters to him to express support — and to let the West Shoreline prison administration know they are being watched by Rev. Pinkney’s supporters around the country, who are paying attention to how he is being treated.