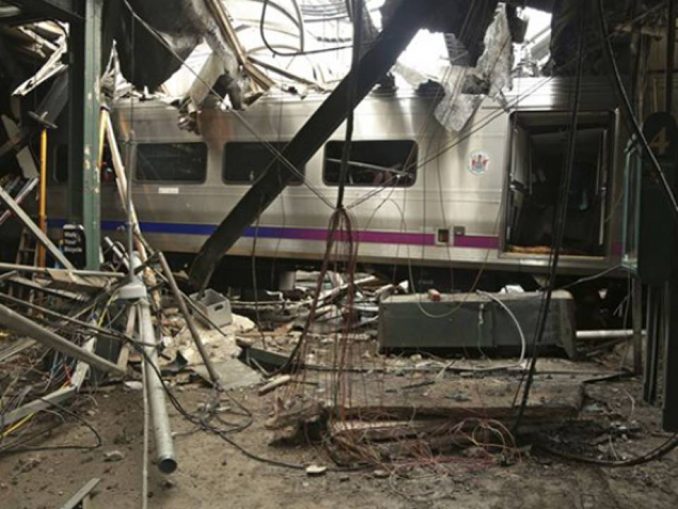 The Sept. 29 train crash in the Hoboken, N.J., terminal during the morning rush hour has shaken people throughout New York City’s metropolitan area. Many are questioning the safety of rail transportation in general.

Instead of coming to a stop at the end of the track, New Jersey Transit train No. 1614 jumped over the bumper block and almost plowed into the station’s waiting room.

Part of a roof collapsed, killing Fabiola Bittar de Kroon, a working mother who was walking on a platform in the station. More than 100 people were injured. Other commuters are thinking that it could have been one of them.

It’s unknown if a mechanical breakdown — like brake failure — or human error was responsible for the crash. The inquiry by the National Transportation Safety Board will take months.

The capitalist media have, surprisingly, not rushed to blame the train’s engineer, Thomas Gallagher, who is cooperating with investigators. New Jersey Gov. Chris Christie has been attacked instead for shortchanging NJ Transit, a state agency.

Many of NJ Transit’s engines and cars were damaged by Hurricane Sandy in 2012, and some of its railroad yards were flooded. The Federal Railroad Administration found safety violations at the commuter railroad. (New York Times, Oct. 2) That’s not unusual in the industry.

Positive Train Control might have prevented the Hoboken tragedy. PTC is a high-tech safety system that forces a reduction in a train’s speed or can bring it to a stop if an engineer ignores a signal or safety restriction.

Freight railroads like the Union Pacific — a 32,000-mile-long goliath that made more than $5 billion in profit last year — screamed that they couldn’t make the deadline. The Association of American Railroads got its lackeys in Congress to extend the time limit to the end of 2018.

Amtrak did finish installing PTC on its Northeast Corridor between Boston and Washington, D.C., by the original deadline. That was too late to prevent the May 12, 2015, wreck of Amtrak train No. 188, which killed eight people in Philadelphia.

NJ Transit has lagged behind in implementing PTC. (The Record, Sept. 29)

Donald Trump’s poodle in Trenton, the state capital, knows his priorities. In addition to refusing to properly fund NJ Transit, Gov. Christie vetoed an increase in the state’s minimum wage.

The decades long delay installing PTC is just one aspect of the crumbling infrastructure in the capitalist United States.

When Colin Kaepernick and his fellow athletes courageously take a knee for the “Star Spangled Banner,” they’re standing up for Flint.

Eight people died in an East Harlem apartment building in 2014 when a 127- year-old gas main owned by Consolidated Edison exploded. (WNYC, March 12, 2014) The private utility made more than $1 billion in profit that year while refusing to replace gas pipes installed in 1887.

According to the NTSB, the East Harlem tragedy might have been prevented if a big hole in a nearby sewer main had been repaired. The city government had known about it for at least eight years. (New York Times, June 9, 2015.)

Sitting in City Hall eight years before the explosion was megabucks Mayor Michael Bloomberg, who was more interested in closing firehouses than in fixing sewer pipes. Forbes magazine estimates Bloomberg’s fortune at $44 billion.

That’s enough dough to give every New Yorker $50,000. But Bloomberg was never in a giving mood. He wanted to force homeless families living in shelters to pay rent while letting public housing crumble. Public housing is infrastructure, too.

Money for bridges, not drones

Thirteen people were killed in 2007 when an Interstate 35W bridge collapsed in Minneapolis. According to the Federal Highway Administration there’s more than 66,000 “structurally deficient bridges” in the U.S. and Puerto Rico. (CBS News, May 25, 2013)

While 66,000 bridges in the U.S. are in danger, the People’s Republic of China has been building thousands of miles of high-speed rail lines and millions of units of affordable housing.

Electrical outages have turned off the lights in all or part of New York City in 1965, 1977, 2003 and 2006. But private utility companies don’t want to invest in upgrading the electrical grid, an absolute necessity for capitalist production.

The capitalist government had to step in via President Barack Obama’s stimulus program to spend billions on it. Capitalists don’t find investing to fix and expand the infrastructure to be individually profitable.

Yet Citibank can find the dough to help finance the Dakota Access Pipeline, which invades Indigenous land and threatens the water supply. (Democracy Now! Sept. 13)

The United States isn’t broke. The Pentagon has spent more than a trillion dollars to occupy and kill poor people in Afghanistan alone.

Maintaining and expanding the infrastructure is a test for any social system. Capitalism — which was born in the African Holocaust and the genocide of Indigenous peoples in the Americas — has failed that test.

We need a socialist revolution just to get lead out of our water and to fix the roads.

The writer is a retired Amtrak train dispatcher.