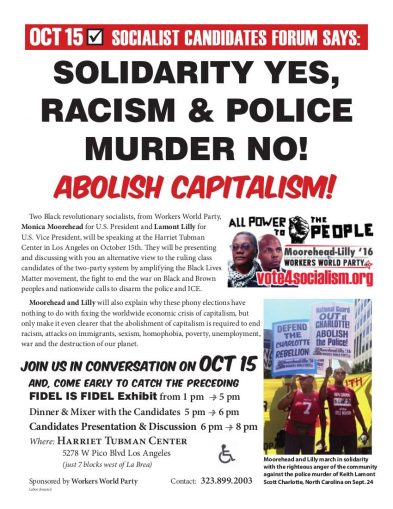 The Moorehead/Lilly campaign is heading west, starting with Workers World Party presidential candidate Monica Moorehead’s participation in the School of Americas Watch’s U.S./Mexican Border Convergence in Nogales, Ariz., and Nogales, Mexico, from Oct. 7 to Oct. 10. Moorehead will help amplify the demands of the convergence:

Moorehead will stay through Oct. 10 to participate in an event honoring ­Indigenous Peoples Day in Tucson.

WWP vice presidential candidate Lamont Lilly will start out in Los Angeles on Oct. 9, meeting with original members of the Black Panther Party and discussing the campaign’s program at a 10 a.m Black Panther Party Breakfast at the Simply Wholesome restaurant in South Central. Lilly will then arrive in Oakland on Oct. 10 to speak at Laney College as part of a series during Latinx History Month. The 6 p.m. event features Melanie Cervantes of Dignidad Rebelde as the keynote speaker. Lilly will speak in honor of Indigenous Peoples Day about his recent solidarity trip to Standing Rock.

Both Moorehead and Lilly will then appear in Oakland on Oct. 12 at the Workers World Party office for a reception at 6 p.m., followed by presentations at 7 p.m. in which they will report back from their visits to Nogales, the Charlotte Uprising, Standing Rock and other significant struggles. Cat Brooks of the Anti Police-Terror Project will be a guest speaker as well. The wheelchair-accessible office is located at 1305 Franklin St. #411. Call 510-600-5800 for information.

On Oct. 13, Moorehead and Lilly will speak at Los Angeles Trade Technical College as guests of the Black and Brown Students for Social Change. Then, on Oct. 15, they will be speak at the Harriet Tubman Center for Social Justice in Los Angeles. There, the two will discuss an alternative view to that of the ruling-class candidates of the two-party system, amplifying the Black Lives Matter movement, the fight to end the war on Black and Brown peoples, and nationwide calls to disarm the police and Immigration and Customs Enforcement.

Guests who come early can also catch the “Fidel is Fidel” photo exhibit from 1 p.m. to 5 p.m. A dinner and mixer with the candidates will begin at 5 p.m.; the candidates’ presentation and discussion will take place from 6 p.m. to 8 p.m. The center is at 5278 W. Pico Blvd. (just seven blocks west of La Brea Avenue).

The candidates’ last stop will be in San Diego on Oct. 16, where they’ve been invited by the Committee Against Police Brutality to participate in a roundtable discussion at the Malcolm X Library & Performing Arts Center, located at 5148 Market St. The event, from 2 p.m. to 4:30 p.m., will also include Soldier Patrick Germany of the San Diego Black Panther Party; Rashida Hameed, San Diego community activist and founder of Epiphany Women in Focus; Dennis Malone of All of Us or None; Darwin Fishman, San Diego Citizens’ Review Board of Police Practices; and Aaron Harvey, Justice4SD33.