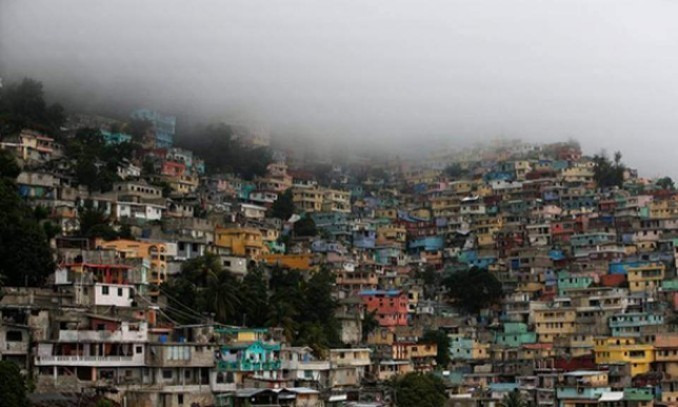 The first round of presidential and parliamentary elections in Haiti is set for Oct. 9; the second round is set for January. The budget for these two rounds is $55 million. The United States is refusing to contribute to this election because it feels the previous attempts were satisfactory, even though Haitians rejected the results as completely tainted by fraud.

Interim President Jocelerme Privert called the decision to hold these elections “irreversible,” even though Haiti is under military occupation by United Nations troops, a cholera epidemic that the U.N. forces brought to Haiti in 2010 is still raging, and Hurricane Matthew is predicted to dump up to 40 inches of rain on Haiti’s denuded land from Oct. 3-4.

The U.N. forces, called Minustah, took over in June 2004 from U.S., French and Canadian troops, which had occupied Haiti after the U.S. sealed a coup against President Jean-Bertrand Aristide in February 2004 by kidnapping him and taking him to the Central African Republic. Minustah troops currently number around 5,000, with an additional 10,000 private “security contractors.”

They are officially called “peace keepers,” but in reality they are a veil for U.S. control of Haiti’s politics and economy, and a backup for the 11,000 cops in Haiti’s national police force, who were trained by cops from the United States.

Cholera has killed 9,393 and sickened 790,840 as of Aug. 20, according to Haiti’s Ministry of Health. UCLA epidemiology professor Ralph R. Frerichs asserts that many cases in remote areas have never been reported. (“Deadly River,” 2016) Rains in May and June led to a 30 percent spike in the disease.

The campaigns of the four most prominent candidates have been drawing large crowds as they crisscrossed the country. Dr. Maryse Narcisse, of the Lavalas Family Party (FL), accompanied by Aristide, encountered some rock throwing in Gonaïves and scuffles in Cap Haïtien. Moïse Jean-Charles, the candidate of Dessalines Children, a breakaway from FL, had a window of his car smashed in the Center Department. Given what has historically happened in Haitian elections, these incidents are a sign of tension rather than an outbreak of violence, noted Haïti-Liberté, 28 Sept.-4 Oct.

The Haitian government, the Haitian media and various election observers are doing everything they can think of to undercut and minimize FL, which has major support throughout Haiti.

In the middle of September, the Department of Homeland Security abruptly reversed a policy of granting “temporary protective status” to Haitians who reached the U.S. border, which has had the effect of removing this issue from the election campaign.

Leading up to the Olympics, Brazil welcomed thousands of Haitians, mainly men, who were a cheap source of labor. Now that the Olympics are over and Brazil is facing economic difficulties, Haitian laborers are being laid off there. Many of them decided to try to get into the U.S.

The DHS decision produced a major outcry in the Haitian community. Marleine Bastien and Steven Forester, writing in Haïti-Liberté, reported, “The Department of Homeland Security’s (DHS) decision last week to resume deportations of noncriminal Haitians, disingenuously citing improved conditions despite political and economic turmoil and an unchecked cholera epidemic, is inhumane, ill-advised, and shocking to the Haitian-American community. It may rip families apart and curtail life-saving remittances to Haiti.” They demanded that DHS immediately reverse itself.

While thousands of Haitians are being refused entry or deported from the U.S., the Dominican Republic is also waging a major campaign to expel anybody with Haitian ancestry on its soil.

Three years ago the Dominican Constitutional Court issued ruling TC168-13, which removed citizenship and statehood from 250,000 people of Haitian ancestry. Since August 2015, some 136,800 returnees have been counted at the border. This year, more than 48,000 have been counted.

A coalition of progressive Dominican groups and Haitian organizations held a press conference Sept. 23 to mark the third anniversary of this decree and to call for its withdrawal. (Radio Metropole Haiti)