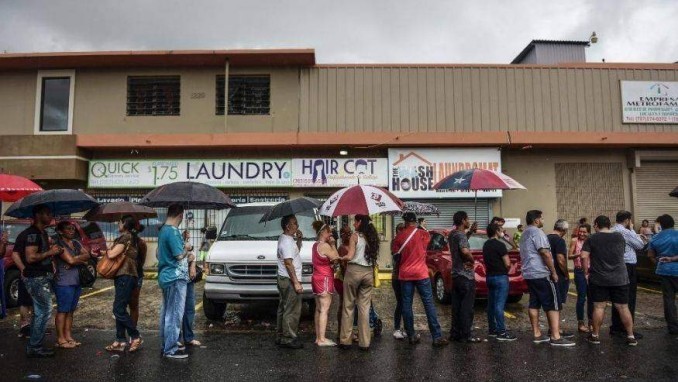 People wait in line to buy ice during the massive blackout in San Juan, Puerto Rico.

The dictatorial Financial Control Board (FCB, called the Junta by progressives) created under the Puerto Rico Oversight, Management and Economic Stabilization Act (PROMESA) aimed at determining Puerto Rico’s destiny, met for the first time on Sept 30.

This meeting was not in San Juan, Puerto Rico, but in New York. That sent a clear message about the location of economic and political power imposed on the Caribbean nation.

In less than half an hour the Junta’s seven members — all unelected — approved and immediately announced a plan of action: The island’s current governor — and the winner of the upcoming November elections — will have only a secretarial role, turning in weekly, monthly, quarterly and annual financial reports to the Junta.

The Junta will take control of the central government and 20 major publicly run corporations, such as the Water and Sewer Authority, the Electric Power Authority, the prestigious University of Puerto Rico, the public radio-TV station, the teachers and judiciary retirement fund, and other agencies that remain solvent despite the deep economic crisis.

Remember that the Junta was set up to pay the bondholders on Wall Street, not to help the Puerto Rican economy.

As the Junta met, demonstrators who reject that imposition of power took to the streets in both New York and Puerto Rico. In Puerto Rico, police used violence to arrest five protesters, thus foreshadowing an expected increase in repression against social and political movements.

The consequences, reactions and responses to this dictatorship will be discussed in future articles. In this one we focus on the Sept. 21 power outage.

On that day, the most serious power outage in recent history had the impact of a declaration of war. It illustrated the consequences of the austerity processes that the Junta will enforce. The Electric Power Authority (AEE) was already being administered by a board — independent of the Junta — which executed similar austerity measures that the Junta plans to impose on other departments. Thus, the power outage vividly illustrates how the Junta’s austerity plan — disguised as “restructuring” — will inflict negative consequences on the people.

For two days, the people were forced to endure seasonally high temperatures, worsened by the lack of water due to pump failure, plus excessive traffic congestion due to lack of traffic lights. (Here we must mention that Puerto Rico has no real public transportation system, making transport by private vehicles a necessity.) There were even accidental deaths, and all kinds of problems that result from lack of electric power, such as spoiled food, small producers’ loss of income, etc.

Thanks to members of the Union of Workers of Electrical and Irrigation Industries (UTIER), who toiled tirelessly for more than 24 hours, it was possible to control the situation despite the AEE’s failures. Compañero Angel Rafael Figueroa Jaramillo, president of UTIER, told WW-Mundo Obrero about the significance of the power outage.

WW-MO: What was the cause of the outage?

ARFJ: Your readers should understand that it was this [financial] crisis that caused the outage; it had nothing to do directly with the country’s generation [of electrical power]. It was directly related to policies of austerity and economy in the country’s power generation. These are two different things.

There’s no doubt there was a fault in the switches in the Central Aguirre yard. But the power plant at Central Aguirre suffered no damage. The output transmission lines — the 230,000 volts coming out — broke down as a result of a switch that was not working because it lacked proper maintenance.

Now if a [power] reserve had been available on the power line — we used to always have a reserve equal to or slightly greater than the largest plant on the line, in this case 500 megawatts (mw) — that reserve would have absorbed the demand that existed before the [Central Aguirre] machine went offline.

As part of the austerity measures, the executive director of AEE, Javier Quintana, on July 25 signed off on a reduction of the reserve from 550 mw to 300 mw. That led other plants, which didn’t have the capacity to absorb consumer demand at that time, to activate a self-protection mechanism that switches them off. This includes privately owned plants [two private plants are both in the south of the island].

WW-MO: What does management and the government see as the future of AEE?

ARFJ: There’s no doubt that this is a policy of privatization that [the capitalist rulers are] trying to implement on a worldwide scale and in Puerto Rico. The way they get popular legitimacy for this policy is based on three principles: let services deteriorate; raise the cost of services; wage a campaign against the state enterprise, in this case AEE, so that the country turns against the company. Then, as if by magic, the solution is to put the company into private hands, even for a service so essential as providing electricity.

For more than 15 years, UTIER has been pointing out and denouncing the road [the capitalist bosses] are taking. They are obstructing the work of the people who work for the country. They refuse to repair the equipment, they abandon preventive maintenance, and they let maintenance systematically deteriorate.

In turn, service costs were increased in an unscrupulous way, and there was no coherent explanation from the state to try to help the country understand the reasons [for the increase]. On the contrary, what [the state] did was join in the campaign of demonization of the company, saying the company was holding the country for ransom, that we were victims of the AEE. And the country was beginning to adopt a negative attitude about its own company, the company of the people of Puerto Rico.

As part of this systematic process of neglecting maintenance, [the AEE administration] started to indicate that the AEE is so much in debt that it is almost impossible to meet its creditors’ demands. In the process they hired the private company AlixPartners, headed in Puerto Rico by Lisa Donahue, and began a process of alleged debt restructuring, together with a process of restructuring the company’s operations.

From the point of view of the private sector, making the company more efficient is nothing other than reducing costs for those operations that directly affect the amount and quality of services to the people.

Then [the AEE administration] started to quickly abandon some obvious things. Our electrical system did not get repaired, to the extreme that when a problem begins at the point of power generation, another more complicated one occurs, [in] transmission and distribution.

To solve both types of problems, [the AEE administration] resorted to leaving people without service through selective outages in sectors, communities or cities. … [That was] creating an environment of hostility toward the company caused by the poor quality of service provided.

In addition, in 2014 the Puerto Rican government approved anti-worker Law 66, [which] led an abrupt departure of thousands of public service workers. In our case, more than 1,200 left who had between 25 and 30 years of service, which meant we lost the experience they had developed and accumulated working on technical tasks.

ARFJ: First,the country must be educated. Some [people] are already orienting on the impact of the PROMESA Act and the Junta; we’ll do it on the theme of energy. It has to be more strategic, more successful.

In [the last] three to four days, we have changed the discourse from the position that privatization is bad because it costs more. No, what we do now is compare the two models, the private and the public.

Do we have the money? No. That dispenses with the discussion over whether there’s money or not.

Let us evaluate the private model. Do [companies] have $4 billion to invest? Yes. What is it going to cost us? There will be interest on that investment. And the bill goes to the people. It will generate profits [that the people will pay].

Let’s evaluate the public model. Do we have the money? No. Can we get it? Yes. Through what mechanism? We can self-finance.

Both models will cost the country money because we have to invest. But in the public model you can make a “spill” — a special contribution for three or four years to create a fund to not only build some new units, but also rebuild the entire transmission system.

Will that “spill” pay interest? No. Will it generate profits? No.

Then, [for the] Puerto Rican people, which of the two will cost less?

That has led to the country becoming interested in the subject. In places where we have explained it over time, people immediately decide in favor of the public model.