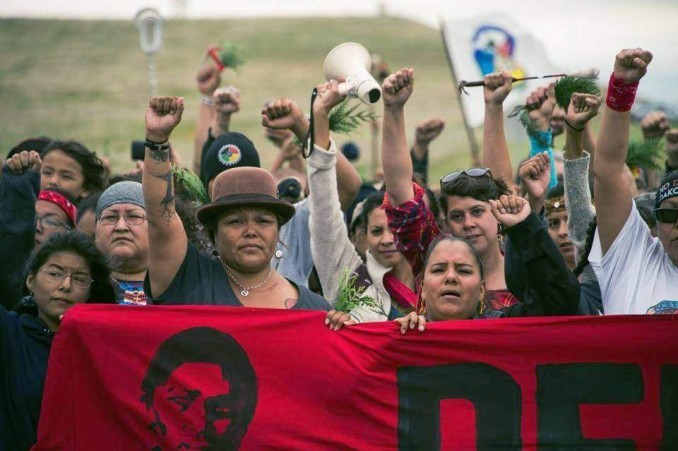 Then, most unfortunately, the AFL-CIO national leadership issued a narrow, backward statement calling for the Dakota Access Pipeline construction to go forward because jobs were being affected by the standoff.

Despite this statement, AFL-CIO affiliates have continued coming out for Standing Rock. Significantly, on Sept. 19 the Labor Coalition for Community Action issued a support statement. The coalition comprises the federation’s six Constituency Groups, representing millions of Black, Latinx, Asian/Pacific, women and LGBTQ union members and acting as “unions’ bridges to diverse communities.”

The statement read: “Together, the Labor Coalition for Community Action, which includes the A. Phillip Randolph Institute, the Asian Pacific American Labor Alliance, the Coalition of Black Trade Unionists, the Coalition of Labor Union Women, the Labor Council for Latin American Advancement, and Pride at Work, rises in solidarity with Native Americans and our allies in protesting against the Dakota Access Pipeline (DAPL) and defending Native lands from exploitation by corporations and the U.S. government.

“We advocate for a progressive labor movement rooted in dignity and respect of all peoples, including Native Americans and their families. Though cited to bring 4,500 jobs, the Dakota Access Pipeline seriously threatens tribal sovereignty, sacred burial grounds, and the water supply of the Standing Rock Sioux and potentially 17 million others. As organizations dedicated to elevating the struggles of our respective constituencies, we stand together to support our Native American kinfolk — one of the most marginalized and disenfranchised groups in our nation’s history — in their fight to protect their communities from further displacement and exploitation.

“We recognize this systematic oppression that so intimately resonates with many communities of color and marginalized populations, whether it be fighting for lead-free water in Flint to uncontaminated water in North Dakota.

“We remain committed to fighting the corporate interests that back this project and name this pipeline ‘a pipeline of corporate greed.’ We challenge the labor movement to strategize on how to better engage and include Native people and other marginalized populations into the labor movement as a whole.

“Lastly, we applaud the many labor unions working to create a new economy with good green jobs and more sustainable employment opportunities for all. We also encourage key stakeholders — labor unions including the building trades, the Standing Rock Sioux tribe and others who would be impacted — to come together to discuss a collective resolution.

“As we just recently recognized Native American Women’s Equal Pay Day and as we approach November — a time that marks not only a significant change in our country’s leadership but also the celebration of Native American Heritage Month — we will continue to campaign and organize for a broader agenda that secures the rights for all working people in all communities.”