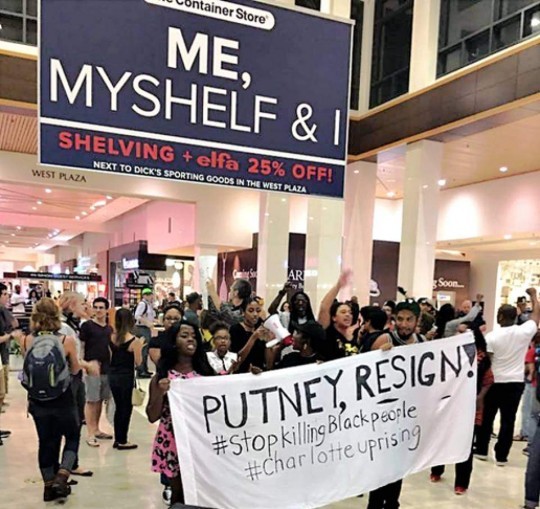 Charlotte-Mecklenburg Police Chief Kerr Putney had been set to hold a community forum on Sept. 29. Over a hundred community members who have been part of the ongoing Charlotte Uprising came to speak out, continue to raise the call for justice for Keith Lamont Scott and Justin Carr, and call for Putney’s resignation. But at the last minute, the CMPD called off the forum.

In response, activists left the church, where the forum was to be held, in their cars in a “funeral-like” caravan. A rally was held at a shuttered library before a march that went to high-traffic shopping areas in South Charlotte – a predominantly rich, white part of town.

The march passed restaurants and other shops with chants of “Black Lives Matter!” “Justice for Keith Scott! Justice for Justin Carr!” and “No justice, no peace! No racist police!”

South Park Mall was just ahead as the march made its way forward. South Park is the largest mall in North Carolina — and one of the most profitable in the country — and includes many high-end retail stores. After marching down into the parking lot and circling the outside of the mall, the demonstration headed inside.

The energy was electric as chants from megaphones bounced off the high ceilings. Workers from nearby stores, many of whom were Black and Brown, came out and joined the chants, cheered on the demonstration, and raised their fists in the air. Some even joined the demonstration, as many of the stores closed early and locked their doors. It was another economic blow the Charlotte Uprising has dealt to business since the rebellion broke out, causing upwards of tens of millions of dollars to the economy.

After winding through the mall and holding down chants in the central rotunda, the march pressed forwarded and continued on to other nearby shopping areas. More actions and demonstrations are planned for the days ahead as the Charlotte Uprising continues to build.