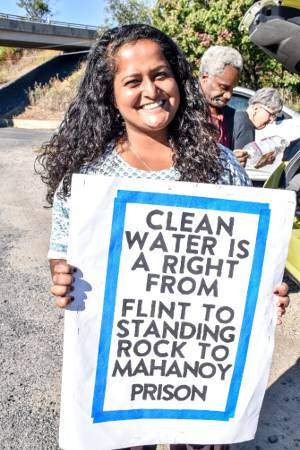 A car caravan transported prisoners’ family members, friends and prisoners’ rights activists to SCI Mahanoy and SCI Frackville prisons on Sept. 25. Outside both prisons in Frackville, Pa., they held signs and handed out fliers raising prisoners’ complaints that tap water is brown and foul-smelling. They also demanded that the state provide curative hepatitis C treatment to prisoners.

The leaflets explained that the problems with water are not just issues for prisoners, but for the surrounding communities, which have also had dirty water.  Water is, of course, essential for life and is considered a basic human right, as agreed to by the United Nations.

After their visit with political prisoner Mumia Abu-Jamal inside Mahanoy, Pam Africa and Charlotte O’Neal reported to a rally outside that the water there is still undrinkable. Other prisoners told them that the discolored water leaves an oily sheen on their skin after they wash or shower.  Africa is minister of confrontation for the International Concerned Family and Friends of Mumia Abu-Jamal (ICFFMAJ), and Charlotte O’Neal is a former member of the Kansas City Black Panther Party and a longtime activist in Tanzania.

At Mahanoy, inmates are only allowed three small cups of water at each meal, while at Frackville, prisoners are given a gallon of water daily for all purposes.  There is not even clean water available for purchase at Mahanoy, so the imprisoned brothers are limited to buying soda or juice from vending machines.  This is not only expensive for prisoners who have little money, but it is a serious danger to those with diabetes — and unhealthy for everyone because of the high sugar content.

Prison officials are threatening inmates with lockdown to prevent them from calling outside and reporting what’s going on.

The ICFFMAJ, the International Action Center, the MOVE Organization, and the Free Mumia Abu-Jamal Coalition NYC organized the rallies.

Demonstrators also criticized the Pennsylvania Department of Corrections, which still refuses to give inmates the new, highly effective medications to cure hepatitis C.  This is despite an Aug. 31 court decision finding the state’s hep C protocol unconstitutional.  Over 6,000 inmates in the state, including Abu-Jamal, have this deadly disease.  The DOC refuses to treat them with Sovaldi and Harvoni, which have an up-to-99-percent cure rate.

Abu-Jamal explained to his visitors that his skin still itches, and he continues to take medicine to relieve the discomfort, even though it causes diarrhea. He and other prisoners are suffering from these and other symptoms of hep C, which could be eliminated if the DOC treated them with the new medications.

Pharmaceutical company Gilead Sciences Inc. owns the patent for the hep C cures and has a monopoly on both medications.  Gilead charges up to $1,000 for one pill and from $84,500 to $94,500 for the full 12-week treatment. In contrast, a humane approach is carried out in India, where the government has set the price of one pill at $4 and $378 for the full treatment.

By not curing hep C in prison, this contagious disease can spread within communities, as ill prisoners are released and could transmit the virus to other people. Most families cannot pay for the exorbitantly priced medicines their loved ones need once they return home.

In August 2015, Mumia sued members of the Pennsylvania DOC for failure to treat him with the known cure for hep C. On Aug. 31, U.S. District Court Judge Robert D. Mariani ruled that the DOC’s hep C protocol for treating the state’s prisoners is unconstitutional, violates the 8th Amendment prohibition of cruel and unusual punishment and engages in “deliberate indifference to the known risks which follow from untreated chronic hepatitis C.” Arguing that prisoners have rights to health care, the judge established that “the standard of care for individuals with chronic hepatitis C is no different within the prison walls than in the community.” (Abolitionist Law Center)

Judge Mariani’s ruling nevertheless denied Mumia’s request for a preliminary injunction that would have allowed the judge to order his immediate treatment. He denied the motion on a technicality — that Mumia’s lawsuit did not name members of the DOC’s Hepatitis C Care Committee, the body charged with treating prisoners with hep C. An appeal on this ruling has since been filed.

Activists demand immediate action by state officials on the following: Investigate reports of water problems; give all prisoners an adequate supply of bottled water for drinking and access to clean water for showering and personal use; treat Mumia and all 6,000 state prisoners who are at risk of dying from the untreated disease with the hep C cure; and provide free hep C curative treatment for all Pennsylvania residents with the deadly disease.

Further, activists ask supporters to phone these state officials and register the demands for clean water and hep C treatment:

Report complaints about the lack of clean water at SCI Mahanoy and SCI Frackville to the Environmental Protection Agency at 800-438-2474.