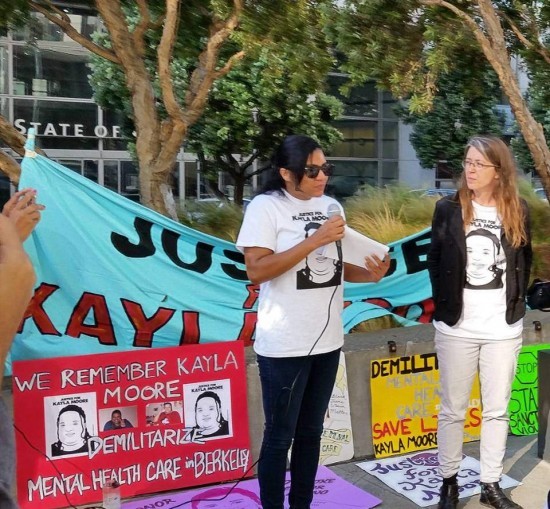 Kayla Moore was a Black transgender woman who was diagnosed as schizophrenic and weighed 350 pounds. She was killed by the Berkeley police on Feb. 13, 2013.

There was a hearing in San Francisco federal court on Sept. 23 where the judge was expected to rule on the city of Berkeley’s motion to dismiss a civil suit for wrongful death brought by Moore’s family. The suit had been scheduled to begin on Oct. 17.

In anticipation of the court hearing, there was a demonstration in front of Berkeley City Hall on Sept. 20, while the Berkeley City Council was meeting inside. After rallying at the City Hall steps, the group of over 100 people marched through downtown Berkeley. Stopping in front of the building where Moore had lived and been killed, the marchers held a short rally, eventually heading back to City Hall.

There was another rally Sept. 23 in front of the San Francisco federal court building. After the rally, people headed inside to the hearing to show support for Moore’s family.

This reporter is not a legal analyst, but from a layperson’s perspective, the judge made the following points: He didn’t accept the legal basis for the plaintiffs’ (Moore’s family) wrongful arrest challenge. However, he was willing to consider a ruling on excessive force.

The question of whether or not the police who killed Moore did so under “protected” status as police officers was the subject of much debate. The judge seemed to question the city’s position that the officers could not have known that Moore was unable to breathe and was suffering from asphyxiation.

The city challenged the capability of the family’s expert witness, who did an independent autopsy and found that Moore had died from asphyxiation resulting from undue pressure on her chest. The judge didn’t respond to the city’s challenge of the witness.

The police were called to Kayla Moore’s apartment on the night she was killed because a friend was concerned that she was suffering from a psychotic episode and needed help. Instead of sending mental health workers, police answered the call. They decided to arrest her, supposedly based on a warrant that was actually issued for an elderly person in San Francisco with the same name.

At the end of the hearing, the judge said he would consider the arguments presented and make a ruling at the Oct. 17 court date.