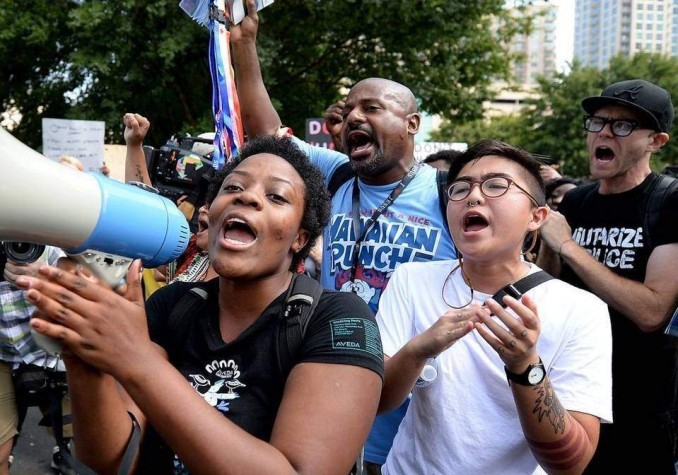 Sept. 29 — After well over 1,000 people spent five consecutive nights of mass uprising in the streets of uptown Charlotte, the community turned its attention to the National Football League game on Sept. 25 between the Carolina Panthers and the Minnesota Vikings.

Hundreds of protesters gathered at the corner of S. Mint and S. Graham streets in front of the Bank of America stadium as tens of thousands of football fans moved past to enter the game.

The demonstrators were protesting the racist police murder of Keith Lamont Scott and subsequent murder of protester Justin Carr.

During the playing of the national anthem at the Panthers vs. Vikings game, hundreds of protesters took a kneel and raised their fists, inspired by San Francisco 49ers quarterback Colin Kaepernick’s refusal to stand during the ceremony in solidarity with oppressed people and against police killings. Dozens of other football and professional athletes have taken similar actions protesting police murders before other sporting events.

The action at the ballpark was organized by the Charlotte Uprising collective. According to later reports, most national broadcast stations omitted airing the national anthem at all, in order to avoid having to cover players’ resistance.

On Sept. 21, on the second day of the uprising, Carolina Panthers quarterback Cam Newton said he wasn’t “happy how the justice has been dealt with over the years, and the state of oppression in our community.”

Newton wore a black T-shirt during pregame warmups with a quote from Martin Luther King Jr. emblazoned on the back that read: “Injustice anywhere is a threat to justice everywhere — MLK.”

A message for justice

The football game provided an opportunity for the community to get out its messages for justice.  Reports indicated that the nights of unrest and the protest at the game deterred many people from attending and filling the 73,000 seats. Fewer tickets were sold for this game than any other in over two years.

The protests were certainly having an economic impact on the city and big businesses, all located downtown. Many popular bars and hotels were boarded up all weekend. This was especially costly on the busy bar nights of Friday and Saturday.

As crowds gathered Saturday night to protest uptown, police pre-emptively blocked off Interstate 277, the main thoroughfare to downtown Charlotte, for several exits, undeniably deterring many from coming downtown at all that night.

Many people are calling for ongoing actions at NFL games and to target other economic interests, such as the Bank of America, to shut down business as usual. They argue that without firm economic pressure on the city, state and federal governments and major businesses, this war on Black and Brown people will never end.

According to Charlotte Center City Partners CEO Michael Smith, the hospitality industry employs some 120,000 people in the Charlotte metro area, accounting for one of every nine jobs. The industry, he adds, is “highly susceptible to business interruption.”

Many hotels and tourism firms are suffering already from House Bill 2, the anti-LGBT law that has led to the NBA All-Star Game and the ACC football championship being pulled from Charlotte.

Following the demonstrations, the Westin hotel had nearly 4,000 room nights cancel this past weekend, manager Leo Percopo told the Charlotte Observer. The impact on revenue so far is “well above $1 million, and probably closer to $2 million,” he said.

At Not Just Coffee at the 7th Street Public Market, owner James Yoder said business has started to pick back up, but it was “pretty dead for several days and through the weekend.”

At Aria and City Smoke combined, owner Pierre Bader told the Charlotte Observer that total losses from the week were likely between $120,000 and $130,000. On Friday, Aria had all 300 reservations canceled. On Saturday, the restaurant served about 50 guests, after about 300 reservations were canceled.

In a solidarity statement, the Black Workers for Justice call for a Black Solidarity Day: “We should consider how to move and engage even more people by stepping up our resistance with a One Day General Strike; (no school, no shopping, no work) to demonstrate to the powers that be that we want real change NOW!”

On Monday, Sept. 26, the day after the Panthers vs. Vikings game, over 150 fast food workers from all across North Carolina went on strike and gathered at the transit center in downtown Charlotte to challenge the police killings.   Called by Raise Up, they have not only been leading the campaign to raise the minimum wage and to push corporations to pay their workers at least $15 per hour, but they have also connected the low-wage workers’ struggle to the movement for Black lives.

Other unions and workers’ organizations have also come out calling workplace actions to target capitalist businesses that benefit from police repression.