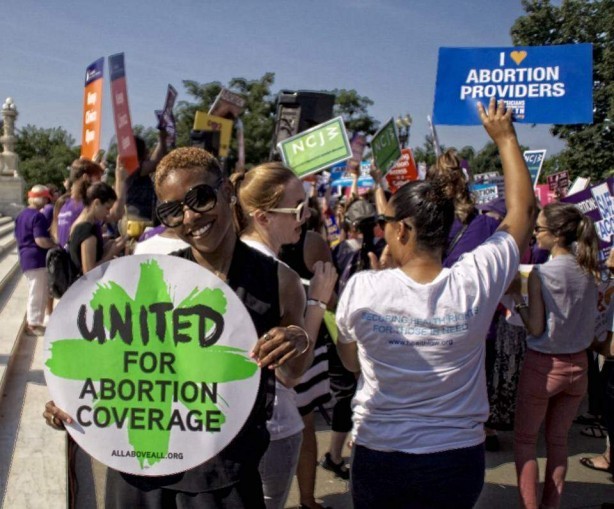 The Hyde Amendment turns 40 on Sept. 30. This reactionary legislation mandates that if you are poor and receive your health care via Medicaid, you cannot get coverage for an abortion unless your health is endangered by the pregnancy or you were impregnated through incest or rape.

The amendment has not been a permanent law but a “rider” that has been routinely attached to annual appropriations bills since 1976. It disproportionately affects young women of color, who are more likely to be poor and depend on Medicaid in this racist society.

A poll released Sept. 15 by Hart Research Associates shows that 76 percent of voters agree that “However we feel about abortion, politicians should not be allowed to deny a woman’s health coverage for it just because she’s poor.” The poll also found that a majority support a bill requiring Medicaid to cover abortion.

Studies by the Guttmacher Institute show that Hyde has imposed an “undue burden” — the measure the Supreme Court used last June to overturn a restrictive Texas law — on the lives of nearly 29 million women of reproductive age (15 to 44) who get health insurance under the federal Medicaid program.

Guttmacher estimates that between 18 percent and 35 percent of Medicaid recipients — about 1 in 4 — who have had an unwanted pregnancy have been forced against their will to carry it to term under Hyde.

Polls show that opposition to Hyde is especially strong among African Americans, Latinxs and youth from 16 to 36 (millennials).

The reproductive justice organization All* Above All, led nationally by young people and people of color, called for protests against Hyde in United for Abortion Coverage Week of Action, from Sept. 25 to Oct. 1. Over 130 activities hosted by 68 organizations in 38 states have been organized to demand an end to federal and state bans on abortions for low-income women.

The current campaign to stop Hyde started when Rep. Barbara Lee (D-Calif.) introduced the EACH Woman Act (Equal Access to Abortion Coverage in Health Insurance) last year. Calling Hyde “shameful and discriminatory,” Lee noted that “none of us, especially elected officials, should be interfering with a woman’s health care decision just because she is poor.” The bill currently has 122 sponsors.

Lee told Truthout, “Accessible, affordable reproductive healthcare is a human right. All women, no matter their income, employer or ZIP code, should be able to make the health care decisions that are right for them and their family.” (Sept. 14)

A wide range of organizations are working in A*AA’s coalition. A number of them address the special needs of Black and Latina women, including In Our Own Voice: National Black Women’s Reproductive Justice Agenda and the National Latina Institute for Reproductive Health.

Yamani Hernandez of the National Network of Abortion Funds notes that its nearly 100 affiliates “hear from over 100,000 people who have to make impossible decisions, like choosing between paying for utilities or abortion care.”

While the movement against Hyde is growing, reactionaries in Congress trying to convert the amendment into a permanent law have been boosted by Donald Trump, who actually called for “punishing” women who have abortions. They called a Sept. 23 congressional hearing to argue that the “right to life” of a fetus is “the ultimate civil right” and hosted a number of pro-Hyde speakers, allowing only one against, Unite for Reproductive and Gender Equity (URGE) Executive Director Kierra Johnson.

Johnson testified: “As a Black woman, I am outraged that the … Hyde Amendment has been permitted to persist for so long. It is a source of pain for many women and should be a source of shame for those who support it. Each of us, not just some of us, should be able to make our own decisions about pregnancy.” (Huffington Post, Sept. 23)

In summing up the struggle for reproductive justice, Destiny Lopez, co-chair of A*AA, told Truthout, “As we wrestle with issues on economic, gender and racial justice in particular, the perspectives and leadership of women of color must be the center of our policymaking. Women of color are leading the movement to end the Hyde Amendment… .”

Unless otherwise cited, the main source for this article is a Sept. 15 All* Above All press release.