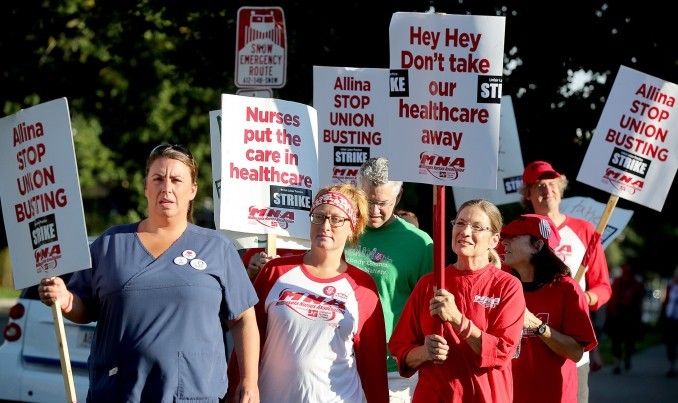 Nurses in the Minnesota Nurses Association started a second unfair labor practice strike on Sept. 5 against Allina Health at five hospitals in the Twin Cities area. The 4,800 nurses, whose contract expired June 1, conducted a seven-day Unfair Labor Practice strike that ended June 25. At the last (22-hour) negotiating session on Sept. 3, Allina demanded a cap on its contribution to health care premiums and shifting cost increases onto nurses, and ignored the union’s request for training to deal with workplace violence and for improvement in the nurse-to-patient ratio. (mnnurses.org)

A group of Twin Cities legislators held a press conference Sept. 19 requesting Allina resume negotiations and work to end the strike. Member organizations in National Nurses United, to which the MNA belongs, organized local pickets and press conferences Sept. 13 in support of the strike. (nationalnursesunited.org) The last big, open-ended nurses’ strikes in the Twin Cities lasted 23 days in 2001 and 38 days in 1984. Stay tuned.

This success follows a monthslong struggle against contractor Eurest for basic dignity and workplace rights. Cafeteria cashier Monica Moreno told the press, “It’s so important that we won the union vote today because now we end the fear of not having enough money to live.” (bna.com, Sept. 16)

According to documents filed in May with the state Occupational Safety and Health Administration and the National Labor Relations Board, Eurest has illegally prevented the workers from accessing restrooms during shifts and “restrained, coerced and interfered” with their right to pursue union representation. Despite Intel pulling in billion-dollar profits yearly, the cafeteria workers who help make this possible are paid so little that many cannot afford to live close to work. According to Working Partnerships USA, service workers at tech companies make on average one-sixth the wages of the white-collar workers and are six times more likely to be Black or Latinx. (kron4.com, Sept. 15)

The National Labor Relations Board issued a ruling July 11 that reversed an existing precedent on organizing temporary workers. It held that permanent employees and temporary staffing employees could be combined in the same bargaining unit without either the employer or the staffing agency’s consent. All that was needed was a “community of interest.” In an August 2015 ruling for “joint employer,” the board imposed new legal obligations on employers who hire through temporary agencies and potentially also on giant corporate franchisors in such industries as fast food, warehousing, manufacturing and food processing plants, recycling facilities, hotels and janitorial services.

“The ruling represents a blow to corporations that have moved forcefully, sometimes overwhelmingly, toward using temporary workers in an effort to block worker benefits and collective bargaining … [and] to avoid labor contracts by using temporary services,” observed In These Times on July 12.

Since the recession of 2008, temp agencies account for more than 17 percent of net employment gains in low-wage service sectors where “permatemps” are used to staff entire departments or facilities. In many auto assembly and parts plants, for example, temp agency workers are paid half of what regular hires make and account for more than half the workforce. (labornotes.org, Aug. 23)

The struggle for livable wages and a union isn’t just about putting more money in workers’ pockets. It’s about saving lives and protecting those with special needs. Sign two petitions that call attention to this. One from Fight for $15 calls on McDonald’s to pay workers enough so they can afford health care: “Myrna De los Santos struggled with health issues for years — but she simply could not afford the health care she needed on McDonald’s pay. Last week, she passed away. She was 49.” The petition at bit.ly/2d9nijg reads: ”McDonald’s, we call on you to pay every worker enough to afford the healthcare they need to live. As Myrna’s tragic case shows, McDonald’s low pay can be a matter of life and death.”

The petition at bit.ly/2cWtQp0 by former Walmart worker Arleja Stephens calls on CEO Doug McMillon to respect pregnant workers. Stephens was fired when her high-risk pregnancy required her to miss work. “My experience is not an isolated incident. … Women across the country reported that Walmart does not allow time off for doctor appointments, that they are not given light work as an accommodation, and that they are scared they will lose their jobs if they speak up or ask for help. … Young, Black, working mothers, like me … should not be forced to choose between a healthy pregnancy and the ability to provide for our families.”