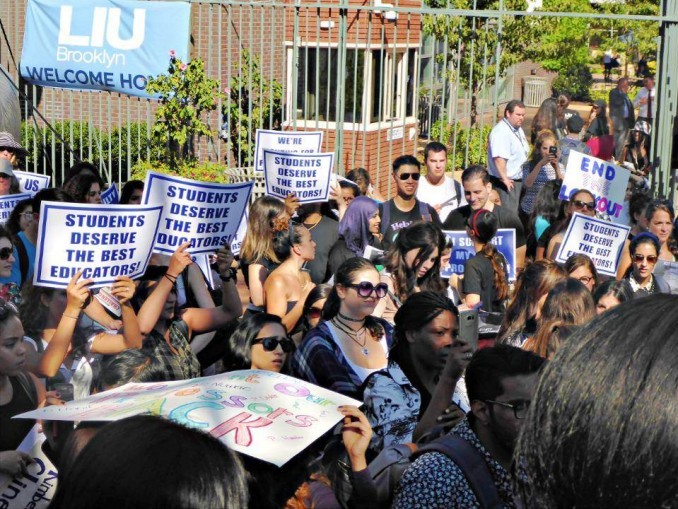 New York — When the Long Island University administration called off the lockout of its Brooklyn faculty Sept. 14, it was an indisputable union victory. Teachers got their jobs back and students started getting the education they had paid big bucks for.

That afternoon hundreds of students walked out and joined the faculty rallying outside the LIU gates, as they did every day during the lockout.

The administration had spent all summer hiring people to scab on the teachers. As it turned out, many couldn’t do the jobs they were hired for. Some quit as soon as they realized they were hired to scab. Others admitted to their classes that they didn’t have the qualifications to teach the course they were assigned.

Many City University of New York retirees find scabbing repulsive. Working for LIU during the lockout was most definitely scabbing. Advanced graduate students at CUNY and other New York schools agreed, even though Ph.D. underemployment is high in New York City.

According to a librarian speaking at a Sept. 14 rally, the people who were hired to scab couldn’t get the library running. They didn’t have the safety certificates to run labs or the licenses to run practicums in various graduate fields, like occupational therapy or teaching. LIU students, predominantly African American, Latinx and South Asian, were angry and disgusted with the situation.

An organized campaign argued that LIU was perpetrating a fraud by charging big money for education they weren’t providing and couldn’t provide. The campaign demanded that the Board of Regents of the state of New York remove LIU President Kim Cline from office.

The Board of Regents has this power and has used it in the past.

The union also sent letters to 14 accrediting agencies asserting that LIU was failing to provide education up to agency standards.

Given the challenges to its accreditation, the charges of fraud, the growing anger among the students, the solidarity in the broader academic community with the locked-out professors — the faculty at the University of San Francisco issued a solidarity statement — the administration at LIU decided to call off the lockout.

The university agreed to extend the current contract with the faculty until May 31, 2017, and bargain with a mediator.

The union statement on the end of the lockout made the following points: “The LIU administration will make the faculty whole for health care costs incurred during the lockout period. The union’s unfair labor practice complaints relating to the lockout and our arbitration on pay parity remain active and will be vigorously pursued.”

Trying to make the university operate with easily replaceable workers failed this time. It is clear that both workers and bosses will carefully examine the lessons of this struggle.