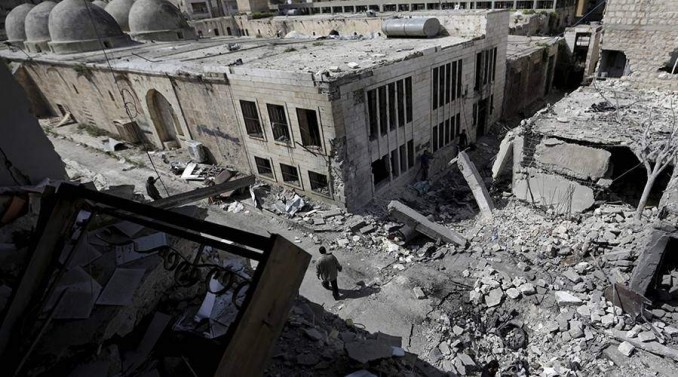 The Sept. 17 bombing of Syrian troops by U.S. planes shows the Pentagon runs the show. The generals went over the heads of the White House and the State Department, sabotaged a ceasefire agreement with Russia by launching deadly airstrikes and provoked a new war crisis.

In 1980 Sam Marcy, founding chairperson of Workers World Party, wrote a pamphlet titled “Generals over the White House” (tinyurl.com/j59gj43). Not much has changed since.

The U.S. ruling-class media spelled out this dispute as it unfolded.

On Sept. 9, the New York Times reported Secretary of State John Kerry had reached an agreement with Russian Foreign Minister Sergei Lavrov, “that, if successful, could lead for the first time to joint military targeting by the two powers against Islamic jihadists in Syria.”

A Pentagon 2015 Military Strategy paper claimed that “threats to world peace” came from Russia, China, Iran, the Democratic People’s Republic of Korea and the Islamic State group (IS). The Sept. 9 agreement meant that the U.S., for now, should ally with one “threat,” Russia, to defeat another, IS.

Kerry had worked on the deal for months. President Barack Obama encouraged him.

Then on Sept. 13, the Times reported: “The agreement that Secretary of State John Kerry announced with Russia to reduce the killing in Syria has widened an increasingly public divide between Mr. Kerry and Defense Secretary Ashton B. Carter, who has deep reservations about the plan for American and Russian forces to jointly target terrorist groups.”

While Kerry and Carter agree on the goal of promoting U.S. imperialist interests, their tactical differences were great enough that the fight became public. For the Pentagon, Russia is a bigger “threat” than IS.

The generals made sure they’d win this argument. They cut short all the discussion with a fait accompli.

U.S. planes, in a Sept. 17 attack lasting a whole hour, bombed and rocketed Syrian Army positions in the eastern province of Deir Ezzor. The attack killed at least 90 Syrian troops and wounded another 110, according to the Britain-based Syrian Observatory for Human Rights.

The generals admitted the attack, claiming it was an “error.” But this was no simple errant bomb. It was a sustained attack with a political goal.

The attack sabotaged the ceasefire agreement. It sent a harsh message to the Syrians and the Russians that there could be no deal with the U.S. civilian government that the U.S. military was constrained to obey.

The assault also allowed Islamic State forces to recapture important strategic positions that Syrian government forces had been on the verge of seizing.

If the Obama administration continues to avoid confronting the generals, then it is conceding foreign policy to the Pentagon. As it did in Afghanistan in 2009.

The Pentagon’s arrogance also sent a message to the people of the United States: If you want to prevent new wars, you’d better get out in the streets, stop work and mobilize, not depend on government officials, elected or appointed, to stop the bombers.

Anti-war forces have called demonstrations in different parts of the U.S. in the coming days to protest the new U.S. aggression in Syria. Help make these protests strong!