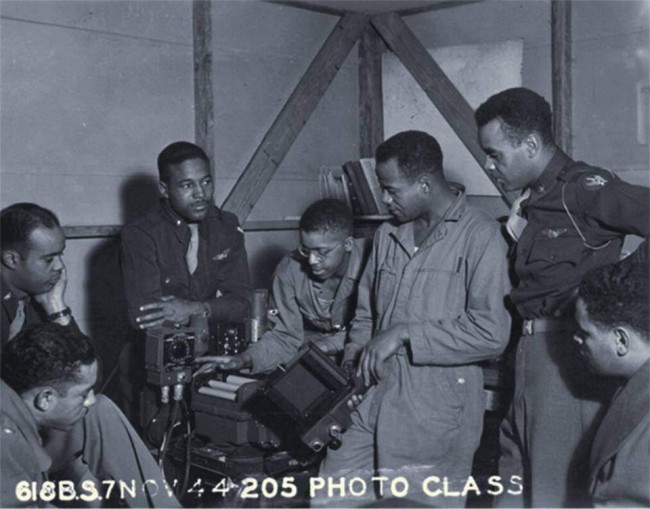 2016 is the 75th anniversary of the Tuskegee Airmen’s formation. The Airmen were the first African-American aviators in U.S. Army Air Corps history. They were pilots, bombardiers, navigators, flight trainers, mechanics and support personnel. Before then, African Americans were barred from military aviation because of their skin color.

Although Blacks had actively participated in the military since the American Revolution, it was nearly impossible for them to attain high-ranking positions.  The Tuskegee Airmen were determined to rise above racial barriers and break “Jim Crow” segregation in the military, which enforced separate barracks, dining halls and opportunities.

“Whites only” signs created barriers for all Black people. African descendants were not offered positions in prestigious schools and competitive jobs — and constantly had to do more and achieve more just to prove they were equal.

Few, if any, schools would train Black people to earn private flying licenses.  Even with a license, Black men were repeatedly rejected as aviators. Outrageous racist myths held that Black people were not capable of flying or serving in any combat position due to “inferior intelligence and capabilities” and were physically “unfit” to fly complex aircraft.

However, the Tuskegee Airmen proved the racists wrong. They were fighting against the Nazis during World War II and against racial discrimination at home.

The Tuskegee Airmen’s story began in 1941. With the war in Europe escalating, and pressure from Civil Rights activists, the Army Air Corps started an experimental program that year for the first all-Black flight school at the Tuskegee Institute in Alabama. Under African-American Col. Benjamin Davis Jr., men trained vigorously to master skills in aerial combat.

In 1943, Tuskegee Airmen were sent to Italy to escort bombers flown by white pilots, protecting them from Nazi combat planes. These Airmen were called the “Red Tail Angels” due to their aircraft’s color.

The Tuskegee Airmen proved that Blacks deserved the opportunity to succeed. They fought bigotry just as effectively as they fought the Nazis. With persistence, patience and skill, they won a major victory against racism. They learned to be twice as good to get half as far and to persevere and not give up. Their guiding principles were “Aim high, believe in yourself, use your brain, be ready to go, never quit and expect to win.”

The first Black student to graduate from West Point was Benjamin Davis Jr.  White students shunned him and refused to share a room or meal with him or even speak to him. When Davis was ready to enter military flight training, he was denied that opportunity because there were no squadrons for Black pilots. But in 1941, Davis was assigned to train at Tuskegee Airfield and became one of its first Airmen.

African-American officers were barred from entering officers’ clubs due to racist segregation. When they entered the club at Freeman Field, Ind., in 1945, 103 were arrested and charged with mutiny and disobedience. The “Freeman Field Mutiny” received help from a young lawyer, Thurgood Marshall, who later became a Supreme Court justice.

The Tuskegee pilots flew 1,578 combat missions in Europe during World War II and destroyed 162 Nazi aircraft. They were heroes for their courage and excellence that brought down barriers and for forging the way for other African Americans.

Several Tuskegee Airmen died this year. The legendary Roscoe Brown Jr. died at age 94. He was commander of the elite African-American fighter aircraft squadron. Brown was the first U.S. pilot to shoot down a German military jet.

Brown challenged the racist military system and remained a champion for civil rights. He dedicated his life to improving education, earning a doctorate in the field.  He became director of African-American Affairs at New York University and the Center for Urban Policy. Brown was a  professor at City University of New York Graduate Center and CUNY Bronx Community College president for 17 years.

Shelby Westbrook died at age 94. He recalled the intense level of racism he and the other Airmen experienced and its effect on them. For example, German troops captured by the U.S. were treated better than Black troops.  Westbrook and many other Tuskegee Airmen received the French Legion of Honor in 2013 for their “extraordinary bravery” in liberating France from the Nazis.

The number of living Tuskegee Airmen is rapidly dwindling. They should be remembered as legendary heroes who triumphed over adversity and broke Jim Crow barriers within the military.