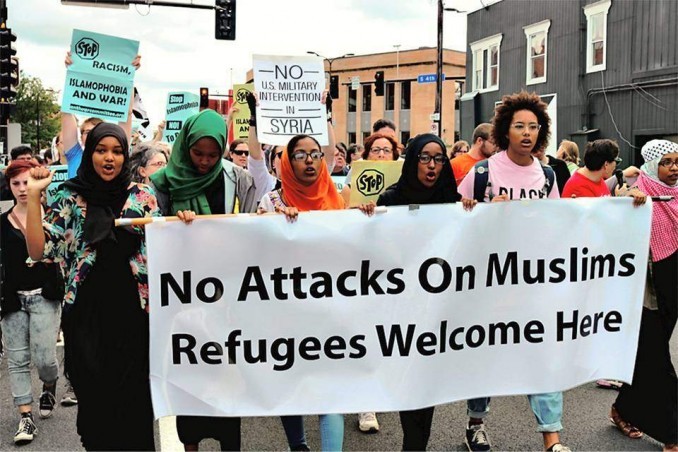 Sept. 16 — Cars honk and passersby raise their fists as over 250 people protest Islamophobia, racism and U.S. wars abroad in the Minneapolis neighborhood of West Bank. The crowd marches, chanting, “No more wars! No more fear! Our Muslim friends are welcome here!” and holding signs that read “Stop the war on Muslims at home and abroad” and “No U.S. military intervention in Syria.” The Minnesota Anti-War Committee and Minnesotans Against Islamophobia sponsored the march.

Minnesota is home to more than 30,000 Somali immigrants, around one-third of the total living in the U.S. The majority live in the Minneapolis-St. Paul area. They are targeted by racism, xenophobia and Islamophobia.

Burhan Mohumad, who grew up in the West Bank neighborhood, decided to get involved after reading and dealing personally with the racism and poverty that afflict his community. “You start to realize that, you know, you’re not poor by the lack of hard work, you’re not poor because you’re irresponsible. So once I became conscious of that, that’s when I wanted to get involved.

“I’m a first generation immigrant that grew up here. Muslim and Black, obviously. You do become really cautious. You start to look over your shoulder.”

He may have good reason to do so. Minneapolis is one of the three major cities implementing “Countering Violent Extremism,” a federal program that locally targets Somali-Americans.

When I reviewed terrorist attacks in the U.S. since the 1980s, I could not find one where a person of Somali descent was convicted. Since the implementation of the CVE program in 2014, at least ten young Somali men have been arrested after being entrapped by FBI informants.

Three were convicted by an all-white jury in Minneapolis in June of this year; five pleaded guilty before their trials. With their sentencing in November, some face life imprisonment.

The rally and march were called to raise awareness of Islamophobia, racism and xenophobia both in the West Bank neighborhood and more generally throughout Minneapolis.

“CVE is essentially a program that says: how can we stop people from being radicalized, how do we stop them from leaving the country,” Burhan explains. “Basically, to sum it up, to say that Muslims are a problem. You don’t target a whole population of people and not see them as a problem.

The Minnesota Anti-War Committee says the CVE program “criminalizes and spies on the Somali community in Minnesota and is a classic divide-and-conquer tactic using ‘trusted’ individuals and organizations, infiltrators posing as friends, teachers in schools, and social service organizations.”

“It’s concerning,” says Burhan, “because you come to this country believing in these freedoms and believing in those civil liberties, and when you come here you have a program like CVE targeting you because you’re Muslim and have this [Somali] background. It is racist. It is xenophobic. It’s anti-Muslim. It’s anti-Black.”

Somali-Canadian rapper K’Naan is developing an HBO series about “jihadi recruitment” set in Minneapolis called “The Recruiter.” The executive director of the series, Kathryn Bigelow, directed the pro-militarist films “Zero Dark Thirty” a fictional account of the CIA hunt for Osama bin Laden and “The Hurt Locker,” which praised soldiers occupying Iraq.

The Somali community and supporters protested K’Naan when he visited the Twin Cities area last week and were met with pepper spray and arrests from the police. While K’Naan met with protesters later to say the show would not demonize the Somali community, many remain unconvinced as long as Bigelow is attached to the project.

The crowd begins stopping traffic and ends up in front of the Republican Party’s office, chanting, “No Trump! No KKK! No racist USA!”

Does Burhan think anything will get better for Muslims after the presidential election in November?

“To be honest with you, I think that it won’t. You have Hillary — who has a proven record, has a proven history of her supporting policies and her saying very devastating and very problematic statements against people of color.”

Her policies at the State Department didn’t bring a lot of hope to Muslims abroad or at home, he says.

“You have Trump, who has literally … spilled out all his bad guts about his feelings about Muslims and about immigrants.

“I am terrified. As a Black person, as a Muslim, I’m terrified. Because now, it’s like — what do you do? How do you protect yourself? How do you involve yourself in this country’s electoral process or in this democracy to raise your voice?

“Honestly, come November, I’m gonna pray hard. I’m a Muslim and I’m a person of faith, and so I’ll just pray that the people of this country, that their consciousness is raised.”

Does he think that this system will deliver justice to vulnerable people in the United States?

“Me being exposed to the literature I’ve been exposed to, I think a socialist system, something that really includes the whole body of the people. … I think that’s the system that would help us. But capitalism? You know Trump’s a capitalist, Hillary is a capitalist.

“People need to be aware of what’s going on in our country. And really protect the vulnerable.”

Despite the steep incline of the fight ahead, Burhan finds hope in the turnout for the march today, which he says is larger than the previous rallies against Islamophobia in Minneapolis.