Following is a mid-September interview with Vasilij Volga, chairperson of the Union of Leftist Forces, ex-member of parliament and former head of the State Commission of Financial Services of Ukraine, by Austrian leftist Wilhelm Langthaler.

Wilhelm Langthaler: What is, in retrospect, your position on the free trade agreement between Ukraine and the European Union? 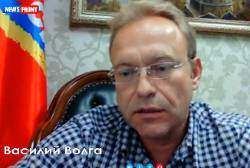 Vasilj Volga: The agreement is actually detrimental to Ukraine’s national economic interest. There was a populist element in the propaganda of the forces which staged the military coup like, for example, facilitating visas, etc. We should immediately cancel the trade agreement and rebuild economic ties with Russia and the entire region in order to serve our national interest.

The popular uprising in the east has been directed also against this unjust agreement. If the rebellion had won, if national interest had not been betrayed, civil war could have been averted. Ukraine could have developed its economic forces in a dynamic way as a bridge between Europe and Asia.

WL: What do you think about the current government led by Poroshenko?

VV: It is really criminal and has committed the full spectrum of crimes against humanity. In order to achieve their goals, Poroshenko and his team have been destroying the basic state institutions. They are supporting and promoting radicalism. I could give many examples for that.

WL: Is the Minsk agreement a way towards conflict resolution?

VV: To fulfil the Minsk agreement is only one possibility to achieve peace. We are in steady contact with our friends in Donbass, which is not under Kiev’s control. There is, indeed, a chance to bring the region back to Ukraine if autonomy and federation are granted. But this requires the full implementation of the agreement.

A law of amnesty must be passed and the special status of Donbass must be constitutionally fixed. We need an international monitoring mission. We need to fight against any provocation which seeks the division between nations, languages or ethnic groups. The judicial system must be brought back in line with the constitution. It must prosecute the mass media and their owners who have been pushing for this conflict. Step-by-step we will have to reconstruct a common state.

WL: Which role did the EU play in this conflict?

VV: It was the very EU which brought this tragedy into our country. They signed a peace plan with President Yanukovych which they promised to guarantee. Under that agreement, Yanukovych was scheduled to step down after half a year. On the very next day, Germany and France supported and recognised the ultraradical rightist forces. If it was a bad agreement, why did they sign it? If it was a good agreement, why they did not implement it?

If we try to rebuild our country and establish peace, how can we trust Germany and France to play the role of mediators? In any case, the EU has to carry the full responsibility for the conflict — let alone the U.S.

WL: Can you explain the project of the Union of Left Forces?

VV: We are trying to form an alliance of left forces, which are totally scattered as of now. The Ukrainian regime is about to dismantle the last traces of the welfare state. All political forces fighting for social justice are being repressed. This is the sense of the so-called de-communization law under which also the Communist Party was banned. Neither socialists nor social democrats are able to operate. The Union of Leftist Forces wants to provide a legal platform for the left, which is trying to defend and protect the remaining social gains. Key people in the CP joined. So did exponents of the Socialist Party and the Civil Control Organisation (a nongovernmental organization turned into a political formation).

WL: What about the repression against you personally?

VV: My possibilities to express myself are very limited. When I was physically attacked during a press conference in Zaporozhye last spring, many TV channels took footage. So there is plenty of evidence. I addressed the minister of the interior, the presidency and the secret service to initiate criminal prosecution. In a privately conveyed message, Minister Avakov gave a clear answer: Any officer doing so will be sacked. The Supreme Court of Ukraine, however, decided to open investigations but Avakov just laughed at that decision. Nothing has happened so far. Any public activity by our party is attacked by the Asov paramilitaries and no authority can move against them.

WL: How, under these conditions, can you think to run for elections?

VV: I really do not know. People are terrified right now. Physical force is used against us. My wife is under constant psychological terror from phone calls and emails. Given all those problems, we do not know whether we can assume this responsibility.

Vasilj Volga is scheduled to address the No Euro Forum, which will take place in Chianciano Terme, Siena, Italy, from Sept. 16 to 18, 2016.