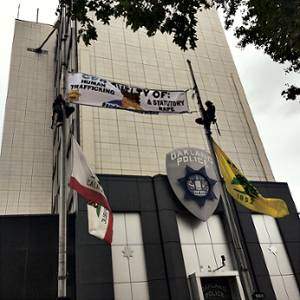 Seven Bay Area current and former cops will be charged for their roles in an outrageous sexual exploitation scandal, publicly exposed in May. Alameda County District Attorney Nancy O’Malley finally announced her intent to charge the police on Sept. 9.

Five of the cops are from the notorious Oakland Police Department. A charge of felony oral copulation with a minor will be filed against Oakland Officer Giovanni LoVerde, as well as Ricardo Perez, a former Contra Costa sheriff’s deputy. Perez, who resigned in June, also faces two misdemeanor counts of engaging in a lewd act in a public place.

The four other Oakland officers to be charged include Officer Brian Bunton with a felony charge of obstruction of justice and a misdemeanor charge of engaging in prostitution. Officer Terryl Smith, who resigned in May, faces four misdemeanor counts of conducting unauthorized searches of a criminal justice data and computer system. Sgt. LeRoy Johnson, retired, will be charged with a misdemeanor for failing to report the abuse. Officer Warit Uttapa faces a misdemeanor charge of conducting an unauthorized search of a criminal justice data and computer system.

But none of these police have actually been charged yet. This is because the key witness and the major victim of the sexual exploitation, Celeste Guap, is now in a Florida jail, possibly as a result of witness tampering by the cops. Guap was a minor when the abuse started. (See workers.org/2016/09/08.)

The DA’s office identified other possible crimes by the police that occurred in other Bay Area jurisdictions. According to O’Malley, Oakland Officers Smith and Uttapa had sex with Guap in Contra Costa County. Two other officers committed crimes in San Francisco, as did a federal police officer located in San Joaquin County, who attempted to serve as Guap’s pimp. (East Bay Times, Sept. 9)

Five cops from Richmond, Calif., are under investigation, but they fall under the jurisdiction of Contra Costa DA Mark Peterson, who has yet to make a statement about any investigation or criminal charges. San Francisco DA George Gascon said that when the San Francisco Police Department’s investigation is complete, he will review it for possible charges. The San Joaquin DA’s office says it has a pending case against a federal officer. (East Bay Times)

Oakland Mayor Libby Schaaf has announced plans to discipline twelve Oakland officers for their actions in the sexual exploitation case. Four will be fired, seven will be suspended without pay, with one to receive only counseling and training. Oakland’s findings against the four to be fired include attempted sexual assault; engaging in lewd conduct in public; assisting in the crime of prostitution; assisting in evading arrest for the crime of prostitution; accessing police databases for personal gain; lying to investigators; failing to report allegations of a minor having sex with officers; and bringing disrepute to the police department.

The names of the twelve officers were not revealed. They are protected under a California “Police Officers’ Bill of Rights” statute. This is the same law that allows police identified in one jurisdiction as abusive, physically violent, “trigger-happy” or found to engage in other dangerous behaviors, to pick up and move to another jurisdiction’s police department, without that record following them.

The cops are protected. But the victim, Celeste Guap, has had her photo and name posted throughout mainstream media since news of the scandal broke in May. Even with the announcement that the cops will be charged, the media are still posting pictures of Guap. The East Bay Express has been the exception to this, and after some research, found and posted some of the officers’ photos. The name “Celeste Guap” used in this article is not the teenager’s name, but a pseudonym. (East Bay Express 9/9)