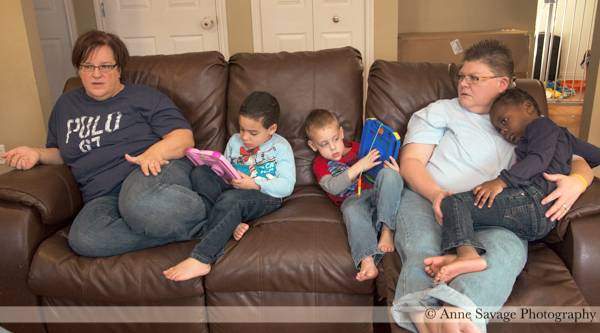 Nurses April DeBoer and Jayne Rowse at home in Michigan with three of their five dopted children.

During their long struggle for justice — which culminated in the 2015 Supreme Court decision giving same-sex couples the right to marry — Michigan nurses Jayne Rowse and April DeBoer described themselves as “accidental activists.” That phrase became the title of a film released earlier this year chronicling their four-year legal battle.

“Accidental Activists,” which premiered at the Detroit Free Press Film Festival in April and screened again in Detroit on Aug. 30, opens with a re-enactment of a near collision involving a semitrailer truck and Rowse and DeBoer’s vehicle. The narrowly averted accident forced the couple to consider the consequences of one of them dying.

While they were co-raising three adopted children, under Michigan law only married couples could adopt children jointly. Rowse and DeBoer could not marry in Michigan, which had one of the most restrictive same-sex marriage bans in the U.S. If the adoptive parent were to die, the children she had adopted would be “legal strangers” to the other parent, who would have no custodial rights.

Determined not to let this scenario occur, in 2011, DeBoer and Rowse took a bold step — suing for joint adoption rights.

Filmmaker Mandi Wright, who covered the case for the Free Press from start to finish, takes us into the Rowse/DeBoer family home. We become part of an emotional roller coaster ride, with each legal advance bringing tears of joy and each setback or delay bringing tears of pain.

Less than a year into the battle, the two and their legal team were unexpectedly faced with a monumental decision. Federal Judge Bernard Friedman ruled that because the denial of joint adoption was based on the fact that the parents were unmarried, the case was really about Michigan’s law denying DeBoer and Rowse the right to marry.

To protect their family, the “accidental activists” could see no other option than to sue for the right to marry.

Bill Schuette, Michigan’s Tea Party attorney general, spent millions of tax dollars defending the bigoted ban. The state argued that somehow protecting “traditional marriage” was necessary because the purpose of marriage was “procreation.” Passed by the voters in 2004, the constitutional amendment not only banned same-sex marriage but also its “approximation” and was used to deny union-negotiated health insurance to state workers’ same-sex domestic partners.

After hearing both sides, Judge Friedman decided to hold a trial — another delay. During the two-week trial, supporters packed the courtroom every day to overflowing. Finally, the judge ruled to strike down the Michigan marriage ban. Immediately, over 300 couples married, but when Attorney General Schuette appealed, the federal appeals court stayed Friedman’s ruling. The appeals court ultimately reversed Friedman’s decision, ruling 2-1 to uphold bans on same-sex marriage in Michigan and three other states.

This was a painful setback, but the plaintiffs in all four states took their fight to the Supreme Court. The rest is history: On June 26, 2015, same-sex marriage became legal in all 50 states in the U.S.

The film goes on to show the wedding and the joint adoption of the children — now five — by “Mommy and Mama.” At the end we are shown another reason why couples need the right to marry. Rowse is hospitalized after suffering a heart attack, likely induced by the stress of the past four years. Without a marriage license, DeBoer and the children could have been denied visitation rights.

“Accidental Activists,” which has yet to be screened in most major venues, reminds us of the serious harm done to countless real families by so-called defenders of “traditional marriage.” Now these bigots — like Trump’s running mate Indiana Gov. Mike Pence — think they can get away with blatant discrimination through anti-LGBTQ laws justified on the basis of hateful “sincerely held religious beliefs.”

This is the same hatred that took the lives of 49 people, mostly Latinx, at an LGBTQ club in Orlando.

The fight goes on!