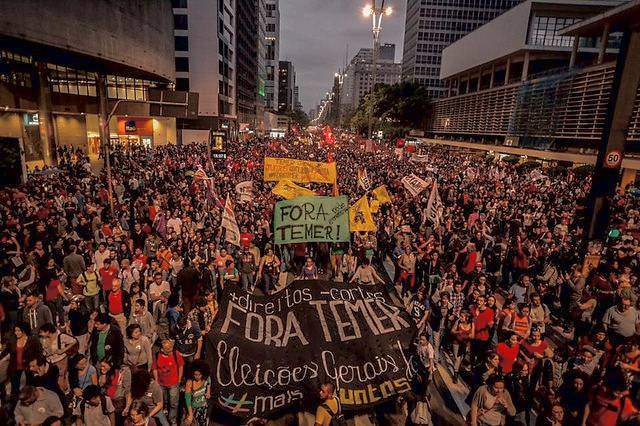 Sept. 4 — Completing, without surprises, a parliamentary coup that began last December, the Brazilian Senate, composed of a majority of corrupt officials subservient to the Brazilian oligarchy and to imperialism, voted 61-20 on Aug. 31 to remove Workers Party President Dilma Rousseff from office.

The vote ended 13 years of Workers Party (PT) governments that began with the election of worker-leader President Lula da Silva in 2002. It took place during Brazil’s economic depression, which is part of the worldwide capitalist downturn and not a result of government policies.

Rousseff’s ouster re-enforces the domination of Brazil by the 71,000 multimillionaires who rule Brazil’s 210 million people by controlling the judiciary, the corporate media and most Brazilian ­politicians.

In 1964 this class imposed its rule through an open military coup by the army, part of the state apparatus that serves the capitalist ruling class. Under that brutal military government, the young Dilma Rousseff was a heroic revolutionary who aided the underground struggle and was later captured and tortured as a prisoner.

The parliamentary coup also strengthens U.S. imperialism in Brazil and all Latin America, where Brazil’s role is so important. This maneuver was carried out with Washington’s support and has already won the blessing of U.S. politicians and Wall Street — as can be seen by the many articles the pro-capitalist Forbes magazine published this year attacking Rousseff.

U.S. imperialism aims to overthrow the popular governments of Venezuela, Bolivia and Ecuador using similar and other tactics. It has already aided a mixture of “parliamentary coups” and naked force to overturn elected governments in Honduras and Paraguay.

The charges brought against Rousseff were for manipulating some budget items in order to spend in one area instead of another, which is often done by governments. No funds wound up in Rousseff’s pockets.

According to Latin American analysts, no one in Brazil, even those who oppose the PT, believes Rousseff is really guilty of the rampant corruption in which the rightist parties (and some PT elements) have participated.

On the other hand, most of those in the Senate who voted against Rousseff are themselves suspected of serious corruption in the so-called Lava Jato scandal.

After eight months of media attacks and scrutiny, when Rousseff was at a low point of popularity, her approval ratings were still higher than those for the new president. Current President Michel Temer, of the conservative Brazilian Democratic Movement Party and instigator of the impeachment against Rousseff, together with former Congress President Eduardo Cunha, were implicated in Lava Jato. Cunha was suspended from his post.

Cunha, a right-wing evangelical politician who opened the impeachment process, is under investigation by the Supreme Court for corruption and money laundering. He is accused of receiving $5 million in bribes from a construction company related to Petrobras, the semi-public Brazilian petroleum company.

As some of the anti-Rousseff politicians themselves admitted in recordings, they pushed the impeachment to stop the investigations. “We have to solve that sh-t [investigations into the Petrobras scandal]. We must change the government to stop this bleeding,” said former Minister of Planning Romero Juca, who had to resign after his remarks were made public. (telesur.net, Aug. 30)

Pro-impeachment Senator Antonio Anastasia, who was in charge of preparing the final evidentiary report to the Senate, rejected Rousseff’s request to include the recordings, calling the facts “outside the scope of the trial.”

As if to admit the trial was a farce, the Senate subsequently voted 42-36 to allow Rousseff to keep her political rights, instead of preventing her from holding any political office for eight years.

Through the early PT governments, Brazil’s economic boom allowed the government to aid the poor without confronting capitalism. Tens of millions of people living in poverty, especially in Brazil’s northern and northeastern states, received a guaranteed minimal income.

The capitalist downturn hit with a vengeance, and in the past few years, unemployment doubled to more than 10 percent. The Brazilian rich took steps to make sure they got whatever wealth they could get their hands on.

While enough of the poor voted PT for Rousseff to win a second term — she received 54 million votes — the PT never mobilized their supporters into popular organizations outside the electoral process. Confronted with a united bourgeois class determined to ignore democracy and bring down Rousseff’s government, the PT was comparatively weak.

Rousseff tried to buttress her government by making concessions to the ruling class and the rightist parties. Every concession was met with greater demands for austerity. The concessions just deflated the popular enthusiasm that put PT in office in 2002.

The first step of the interim Temer regime was to appoint a cabinet composed solely of European-origin men closely connected with the ruling rich. This disenfranchised the majority, consisting of women, people of African origins and Indigenous peoples. It also signaled an open attack on the working class and on all the benefits the PT had offered the poor.

Through the eight months of the undemocratic impeachment process, tens of thousands of Brazilian workers, farmers and other left forces, PT supporters and critics alike, demonstrated against impeachment. These could be seen during the Olympics, when right outside the games thousands raised their main slogan, “Temer out!” (Fora Temer).

This slogan and opposition to the process has popular support throughout Latin America and even in the United States. Groups like the International Action Center joined expatriate Brazilians to defend Rousseff against the Brazilian oligarchy and U.S. imperialism.

But this movement was still too weak to stop the ouster. The rightists continue to reject any democratic process, including early elections this year, which most Brazilians want. While still in a difficult position, the Brazilian left has united against the Temer government.

Brazilian labor expert Ricardo Antunes wrote in Vermelho, the newspaper of the Communist Party of Brazil: “The scenario we face in the next six months is daunting, and will impel the labor and social movements into passionate struggles.” Antunes expects Brazilians to “enter a period of social confrontation, of union and social demonstrations.” (vermelho.org.br, Sept. 4)

In his article Antunes quotes Joao Pedro Stedile, a leader of the mass Landless Movement of farm workers and landless peasants. Stedile has called for a general popular mobilization under the theme, “Temer out!”

“It’s the greatest of all the battles,” Stedile writes. “We want to struggle for changes in the political system of the country, with reforms of the political system and of the means of communication, ones that can only be carried out by a constituent national assembly. All these battles demand mass struggles and great popular mobilizations.

“We expect many struggles as we move forward,” adds Stedile. The coup-makers will receive “only the scorn they deserve as they wind up in the trash bin history has reserved for them.”