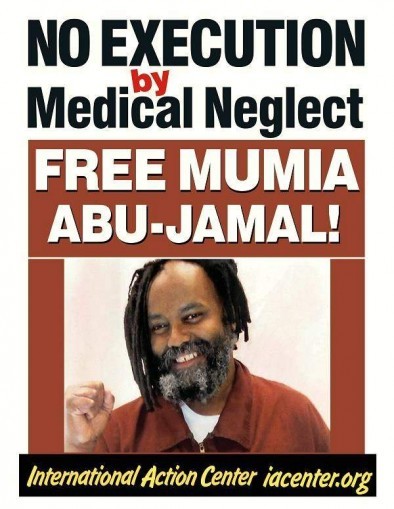 The field of legal and political battle has taken on even more sophisticated dimensions in the last few days, as Mumia Abu Jamal’s defenders devise and carry out new strategies that will help “keep open” a breach found in a recent decision by Judge Robert D. Mariani.

On Sept. 1, the judge dismissed on a technicality part of Mumia’s lawsuit to receive medication from the Philadelphia Department of Corrections to treat his hepatitis C. At the same time, Mariani cited the DOC for having violated Mumia’s constitutional rights, the Eighth Amendment in particular, under the department’s own hepatitis C treatment protocol. The protocol applies to Mumia and the 6,000-plus prisoners held captive inside the clutches of the state who are infected with hepatitis C.

While disappointing, Mumia’s advocates see new routes to securing not only the highly recommended antiviral treatment from the DOC, but in Mumia’s ultimate release from prison, too. Attorney Rachel Wolkenstein lays out a withering critique of the decades-long railroading that Mumia has been subjected to under false pretense:

“A new legal action filed by Mumia Abu-Jamal in the Pennsylvania Court of Common Pleas on August 7, 2016, provides a path in the courts to overturn Mumia’s conviction and win his freedom. The legal underpinning is the recent precedent-setting U.S. Supreme Court decision Williams v. Pennsylvania, 136 S.Ct. 1989 (2016), which holds it is a violation of the due process right to an impartial tribunal free of judicial bias if a judge participating in a criminal appeal had ‘a significant personal involvement as a prosecutor in a critical decision’ in a defendant’s case.

“Ronald D. Castille was a senior Assistant District Attorney during Mumia’s 1982 trial and the Philadelphia District Attorney during Mumia’s direct appeal of conviction and death sentence. Ronald D. Castille was a Justice of the Pennsylvania Supreme Court during the entire period of Mumia’s appeals of his post-conviction proceedings from 1995-2008.

“Castille’s role as both prosecutor and judge in Mumia’s case, in light of the Williams decision, opens the door to a court decision vacating (overturning and dismissing) all Pennsylvania Supreme Court denials of Mumia’s post-conviction petitions. If this new legal action succeeds, Mumia would get ‘do-overs’ to the legal challenges he made to the racist frame-up conviction, for which he has now spent close to 35 years in prison, almost thirty in solitary confinement on death row.” (rachelwolkenstein.net)

Upon reflecting on the judge’s decision, both Mumia and lawyer Bob Boyle were optimistic. Mumia saw it as “a good beginning that a federal judge recognizes that what the commonwealth is doing, and has been doing for years, is not only unjust, but not right, unconstitutional.” (Democracy Now, Sept. 2)

Bob Boyle, one of Mumia’s attorneys in this lawsuit, saw that an opening had been created in the decision and that, while the technicality issue didn’t sit well with himself and attorney Bret Grote, the situation provided room for rebuttal, which they will pursue.

On the political front the following actions are planned:

On Wednesday, Sept. 7, actions led by Pam Africa, Suzanne Ross, Johanna Fernandez, and other organizations and groups are planned in Philadelphia.

On Monday, Sept. 12, Pam Africa, Mireille Fanon, Suzanne Ross and others will update activists at the Solidarity Center in New York City about the road ahead and the findings of a special United Nations commission that carefully examined the social and political conditions of people of African descent in the U.S.

While the forces supporting Mumia continue along the victorious path of struggle, it helps to remember the observations by comrade Amílcar Cabral:

“Tell no lies, claim no easy victories. A luta continua.”