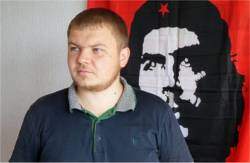 Following are excerpts from an interview with Alexey Albu, a coordinator of the Ukrainian Marxist organization Union Borotba (Struggle) and survivor of the May 2, 2014, Odessa massacre, who is currently living in exile. The interview was conducted by Dmitry Rodionov and published by the Russian news site “Free Press” on Aug. 4. Edited and translated by Workers World contributing editor Greg Butterfield.

How great is the pressure in Ukrainian society to reboot the regime?

Ukraine is really at an impasse. Living standards have fallen catastrophically. The country is mired in a permanent conflict among the various political groups, and a reboot is really necessary. But we understand that politics is the concentrated expression of economics, and that if you do not change the economic model of society, then no reboot is possible.

Every politician represents the economic interests of one or another economic group, and is engaged in lobbying or business protection. Huge resources are needed to achieve power, so politicians are not independent figures. Full political independence is a rarity under capitalism. So, talking about a political reboot, I do not think it is possible without rebooting the economy. There may be partial fixes to the system, but not a transition to a new, more progressive stage of development …

Is the West really the only point of support for modern Ukraine? What’s in store for Ukraine if there are changes to the West: for example, if Trump comes to power in the United States, or Eurosceptics in the leading countries of Europe? How much is Kiev ready to respond to these changes?

I strongly believe this version of a change in the political situation in the West is not in store for Ukraine. Fundamental changes are not in the offing, because the West has its interests here, and they will not change with the arrival of new leaders in Germany or the United States. Some bargaining is possible, but not a complete surrender of those interests.

Thus, some experts put forward the argument that recognition of Crimea under Trump would only happen in case of Russian concessions in other areas — such as the complete surrender of Ukraine and refusal to support pro-Russian forces, or the surrender of Assad in Syria.

So much for the pro-Western path, with which I fundamentally disagree. However, I also don’t think that joining the Customs Union is a panacea for all ills of the Ukrainian economy. I am firmly convinced that Ukraine’s economy can only be saved by the nationalization of large enterprises, as well as a return to the system of planned economy. But this is not possible while the power in Ukraine is fully controlled by the oligarchs.

Many Kiev officials now aggressively call Trump very insulting epithets. How will they behave if he suddenly becomes president?

Yes, many of the current leaders of Ukraine are oriented towards Trump’s opponents, but if he wins — they will try to establish a dialogue with the new U.S. administration.

Ideologically, Trump is very close to the current leadership of Ukraine. He speaks about the same things which Maidan stood for: preservation of the capitalist system, discrimination based on religious or ethnic grounds, reduction of the public sector of the economy. So if the man in the street, who supports the Ukrainian government, took the pot off his head and tried to understand what was happening, he would experience cognitive dissonance.

What, in your opinion, is required to break the current ideological crisis? Will it require external pressure or will Ukraine be able to overcome it by itself?

As I already said, politics is a reflection of economic processes. Therefore, to reboot politics, you need to solve the problem of the power of the oligarchs. And this should be the main idea of today’s Ukrainian society. But that is possible only when a political entity emerges in the country which will fight against the oligarchs and those who are fed from their hands — the ultra-nationalists — not only in words but in deeds. Perhaps even with arms in hand. Only then is it possible to change the whole system.