The headline seemed to herald a new day and was reported by corporate media as breaking news: “Justice Department says it will end use of private prisons.”

On Aug. 18, U.S. Deputy Attorney General Sally Yates sent out a memo instructing federal officials to “not renew contracts with prison operators or to diminish existing contracts” as they come up for renewal over the next five years. She added this was “the first step in the process of reducing — and ultimately ending — our use of privately operated prisons.”

The memo immediately got enormous coverage. It sounded like dramatic prison reform.

But the new directive will impact only 22,000 federal prisoners — less than 1 percent of the 2.3 million people held in U.S. prisons. It will not significantly reduce the number of prisoners at the national, state or local level.

It does not address the hundreds of ways that public prisons are the source of an endless profit stream for U.S. corporations and banks. It does not touch the notorious hellholes of state-operated Attica, Angola, Soledad, Atmore Holman, Florence, San Quentin or other prison concentration camps.

It will not end slave labor, forced work programs or solitary confinement.

The Department of Justice directive applies only to the Federal Prison Bureau. It does not apply to U.S. Homeland Security or federal Immigration and Customs Enforcement prisoners — the fastest-growing area of the private U.S. prison industry. In 2015 for-profit ICE prisons held 62 percent of all Homeland Security incarcerated immigrants. (americanprogress.org/issues)

As small as this change is in U.S. prison policy, it came only because of struggle by prisoners and by grass-roots activists.

The pressure to maximize profit in private prisons has been exposed in Mother Jones and The Nation, in left publications including Workers World, and in social media campaigns, petitions and protests. These have highlighted the secretive, abusive conditions of prisons for profit run by megabusinesses like G4S, CEO Group and Corrections Corporation of America.

In ICE for-profit detention centers, where many of those held are mothers with children, prisoners have gone on hunger strikes and repeated protests against inhuman conditions. Because of mass opposition, both Bernie Sanders and Hillary Clinton made campaign statements opposing private prisons. 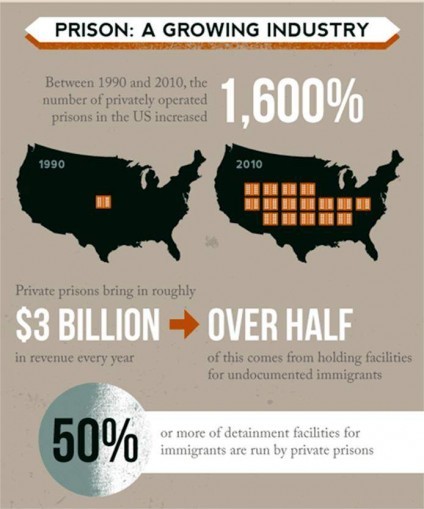 The recent directive will strengthen the struggle to end existing U.S. private prisons, even though only 13 privately run facilities are covered. The directive is also significant because it goes against the drive to privatize for profit every aspect of every institution in the public domain — including schools, hospitals, libraries, social services and parks.

Activists can springboard from the directive and demand the closing of all 7,000 U.S. prisons and jails.

The U.S. jails more people per capita than any country in the world. With less than 5 percent of the world’s population, the U.S. imprisons more than 25 percent of those incarcerated globally. More than two-thirds of state prisoners and 97 percent of federal prisoners are serving time for nonviolent crimes.

This number more than triples — to 7 million — if the 850,000 people on parole and 3.9 million people on probation are counted. Unpayable bail is the cause of 11 million people a year cycling through local and city jails as they await arraignment and trial.

Prison: a racist system of torture

The racism pervading every aspect of life in capitalist society — from jobs, income and housing to education, health care and opportunity — is most brutally reflected in those caught up in the U.S. prison system. Overwhelmingly, they are people of color. Mass incarceration is both racist to the core and hugely profitable for the banks and corporations.

Nationally, 39 percent of African-American men in their twenties are in prison, on probation or on parole. In major urban areas, an astonishing one-half of Black men have criminal records. The U.S. imprisons more people than South Africa did under apartheid. (“Incarceration Nation” by Linn Washington)

There are now more African-American men in prison, on probation or on parole than were enslaved in 1850, before the Civil War began, according to Michelle Alexander in “The New Jim Crow: Mass Incarceration in the Age of Colorblindness.”

Increased support is needed for the growing number of prisoners’ rights campaigns to fight this predatory, racist system.

Prison justice campaigns have exposed systematic torture, including solitary confinement. According to solitarywatch.com, more than 80,000 prisoners are held in solitary on a daily basis, including 25,000 prisoners in long-term isolation, stretching into years and decades.

Tens of thousands of prisoners are held in Supermax prisons, Secure Housing Units, Restricted Housing Units, Special Management Units, disciplinary segregation or other isolation cells in prisons and jails around the country. Keeping prisoners in 23-hour lockdown has become routine practice in understaffed prisons. These figures do not include prisoners in juvenile facilities, immigrant detention centers and local jails.

Campaigns have focused on the urgent necessity of providing life-saving medical treatment to prisoners, such as access to hepatitis C and HIV medicines.

The network linking prison corporations, investment firms, police and their “benevolent societies,” courts and the bail/fine system is called the prison-industrial complex. The name is parallel to “the military-industrial complex” — a term for the interconnected banks, military and oil industries, contractors, corporate lobbyists and professional soldiers that profit from war and repression.

Almost all federal, state, county and city government prisons operate in ways that allow corporations to make big profits, even when the jails are technically still considered “public” institutions. Prison bonds provide a lucrative return for such capitalist investors as Merrill-Lynch, Shearson Lehman, American Express and Allstate. Prisoners are traded from one state to another based on the most profitable payment-per-bed arrangement.

Private or for-profit companies, rather than government agencies, are involved in the building and maintenance of prisons. Food services, surveillance, medical services, prisoner phone service and ankle monitors are all contracted out to major corporations and bring windfall profits. Even probation services and recruiting and training of guards are now contracted out to private–for-profit corporations.

Prison phone companies GTL and Securus Technologies sued and won a decade-long effort to stop limiting the charge for prisoner phone calls to $.11 a minute. They were determined to keep in place charges for prisoner phone calls of up to $14 a minute. The staggering phone charges keep prisoners out of touch with their families and their families further drowning in debt. (arstechnica.com/tech-policy)

Guaranteed contract renewals and a high rate of profit ensure that lobbyists will push for an ever-expanding prison system.

The Department of Justice memo on closing private prisons makes no mention of another profitable operation inside U.S. prisons — prisoner manufacture of military weapons.

Giant multinational corporations purchase parts assembled outside the U.S. at some of the lowest labor rates in the world, then resell the finished components — weapons as well as other products — to the U.S. government at the highest rates of profit. Major corporations profiting from the slave labor of prisoners include Motorola, Compaq, Honeywell, Microsoft, Revlon, Chevron, TWA, Victoria’s Secret and Eddie Bauer.

The U.S. prison system extracts superprofits from the most desperate and isolated part of the population. In capitalist courts, the corporate right to profit almost always trumps human rights.

In fact, the entire prison system operates as a very profitable form of modern day slavery. So it is helpful to remember the words of the great abolitionist leader Frederick Douglass: “Power concedes nothing without a struggle. It never has and it never will.”

The struggle against prisons must raise the demand to abolish this modern form of slavery and tear down the walls.