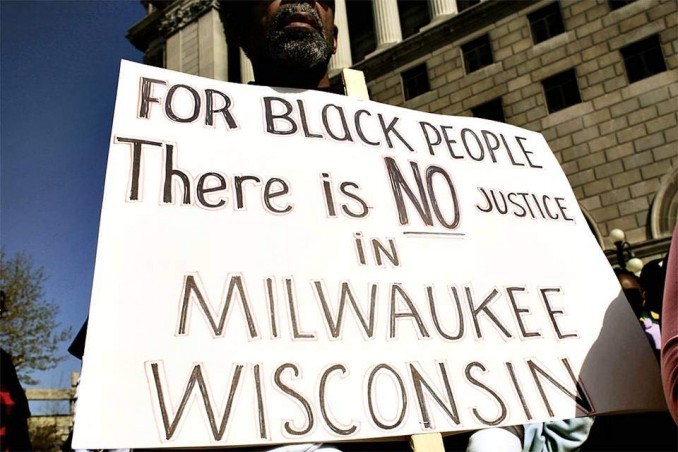 Milwaukee Solidarity with youth fighting police terror was strong at an informal gathering in Sherman Park here on Aug. 21. The park was the location of a youth uprising in protest of the killing of Sylville Smith, an African-American man, by Milwaukee police on Aug. 13.

The Wisconsin Bailout the People Movement initiated the community picnic to support the courageous youth being vilified by both corporate media and city officials for demonstrating anger against Smith’s death. The Milwaukee protesters were met with an aggressive police force, like the police reaction to protests in Baltimore after the police killing of Freddie Grey in 2015 or in Ferguson, Mo., against that of Michael Brown in 2014. As in the those cities, instead of dispersing, youth decided to act in self-defense, allegedly answering police aggression by throwing objects at the cops and setting fire to a BP gas station next to the park.

Homes were also burned. However, Babbette Grunow, who co-hosts a radio program in Milwaukee and lives near the park, voiced on-the-air skepticism about placing responsibility on youth protesters. She noted that one landlord had previously spoken of the benefits of collecting insurance money instead of continuing ownership of the homes.

Those gathered at the community cook-out all agreed that the anger of the youth was justified. Meeting at the park were activists from Bail Out the People Movement, union members, an NAACP member, youth from the Industrial Workers of the World, as well as neighborhood families. Members of Workers World Party came in support from Durham, N.C.; Rockford, Ill.; and Los Angeles and from Detroit FIST (Fight Imperialism, Stand Together).

People were in agreement that the best way to change the youths’ reaction was to get the police to stop killing Black people, and instead of budgeting more money for cops, use money to provide jobs and opportunities for youth.

The event was also a speak-out for the community, as people shared the microphone to denounce injustice they had personally experienced from police. One Black youth, who appeared to be around 11 years old, told this writer, “The police came up to me while I was just sitting in the park and put a gun to my head.”

Many people spoke about the need to reopen Sherman Park for the youth. After the rebellion, the police enforced a 6 p.m. curfew. They surrounded the park with an orange plastic fence, a constant reminder of yet another resource denied to the Milwaukee community, which already suffers from one of the highest unemployment and incarceration rates in the U.S.

A Black man in his twenties, who is a volunteer at the Boys and Girls Clubs of Greater Milwaukee located in Sherman Park, said, “We bought all of these materials, videos and things for the kids that we can’t use now because of the curfew. We used to have movie nights and activities for the kids and would make sure that everyone was out of the park by 10 p.m. There were no fights or problems, and it provided something for them to do.”

He described how he found out how strict the curfew was: “My daughter had an asthma attack and I needed to get home quick, so I had to walk through the park. A cop told me to walk all the way around, but I refused to listen to that bulls–t and kept on walking.” Luckily, he wasn’t arrested for trying to save his daughter’s life.

Gilbert Johnson, former president of American Federation of State, County, and Municipal Employees Local 82, talked about how ironic it was that Wisconsin Gov. Scott Walker said he wanted to improve Milwaukee, but then closed down a rail manufacturing plant providing local jobs and keeping community businesses functioning. After that, Walker went after public sector unions. “The only union that should be abolished is the police union,” Johnson said, stressing the need to organize and support the youth to defeat police terror in the community.

Caesar Crayton, a Black gay youth and member of IWW’s Milwaukee Chapter, said, “I’m here standing in solidarity with our youth and letting them know that we have a voice and we should not be afraid to use it. We are gonna stand up and fight back when we are under attack. This is our park and we are taking it back!”

In the spirit of those words, the last activity of the picnic was to symbolically reclaim the park by placing placards on thosevery same orange fences meant to deter the community. The signs stated: “Disarm and Abolish Cops and National Guard,” “Resistance Is Justified from Milwaukee to Palestine,” “Parks Are for the Youth, Not Cops,” and more. The community was continuing its steadfast “No!” to violent police aggression aimed at the Black and Brown youth of Milwaukee.

Parker, a leader of the Los Angeles Branch of WWP, is the Peace & Freedom candidate for senator in California.