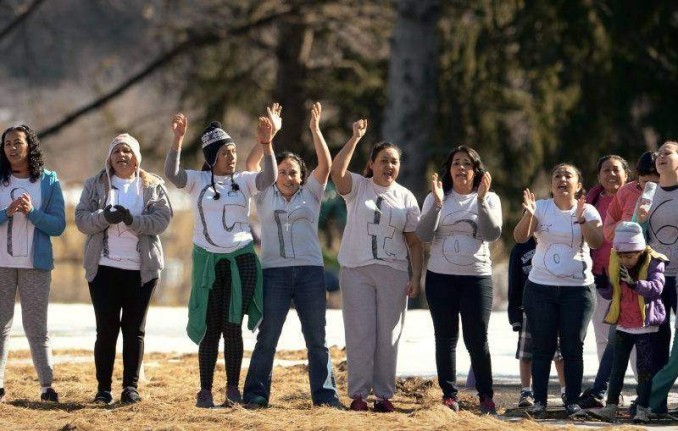 Women immigrants held in the Berks County Family Detention Center in Leesport, Pa., launched a courageous hunger strike on Aug. 8 to protest their confinement and that of their children, whose health and well-being are deteriorating. Calling themselves the “Madres Berks,” they assert, “We are desperate and we will get out dead or alive.” (telesurtv.net, Aug. 12)

These Central American refugees say they have been detained for 270 to 365 days. Secretary of Homeland Security Jeh Johnson told the media that the administration is ensuring the average stay is “20 days or less.”  When the women got wind of his statement, they decided to publicize their long detentions.

In a letter to Johnson, the women wrote: “On many occasions our children [ages 2 to 16] have thought about suicide because of the confinement and desperation that is caused by being here.” (democracynow.org, Aug. 17)  Their children are suffering, many not eating or sleeping.

Olga Byrne of Human Rights First, an immigrants’ advocacy organization, says, “The Obama administration’s detention of families has had severely traumatizing effects on both children and their mothers. Even a few days in detention can be harmful to the health of children.”

These women were not granted asylum at the U.S. border, but, with the American Civil Liberties Union’s assistance, have appealed and filed petitions in federal court requesting new screenings. The government asserts that the women do not have a legal right to challenge their imprisonment or to appeal through the courts as newly arrived immigrants. A federal judge agreed. But an appeal has been filed on the women’s behalf — and it’s a test case for other “noncitizens,” too.

The U.S. government’s policy regarding Central American families fleeing violence and extreme poverty in their homelands is to lock up women with their children, including babies, in “family detention centers.” Instead of providing safe, healthy environments, or allowing these families to live with relatives, the state punitively jails them in isolated facilities, providing little or no legal or social services and violating their civil and human rights.

The practice of detaining families expanded in 2014 when the government tried to stop immigration, mainly from Honduras, El Salvador and Guatemala — countries where the U.S. continues to play a large role in fomenting violence and instability.  In 2009, former Secretary of State, and current presidential candidate, Hillary Clinton supported a right-wing coup against the democratically elected government of Honduras. The coup ushered in repression and violence on a massive scale, causing many people to flee.

In the summer of 2015, U.S. District Judge Dolly Gee ordered the government to release migrant children and their mothers within 20 days, arguing that their detention violates the Flores Settlement, which  established policies regarding custody and housing of immigrant children since 1997.

Around the 20-day period, Texas immigration jails send detainees to Berks, where “the 20-day period doesn’t apply,” says immigration attorney Carol Anne Donohue, president of the Greater Reading [Pa.] Immigration Project. The for-profit detention center is publicly run, but has a contract with Immigration, Customs and Enforcement to maintain a certain occupancy rate. The state cancelled Berks’ license, so it is illegal to detain children there, but that is being allowed anyway.

The Obama administration is holding in custody and deporting record numbers of immigrants; tens of thousands are being held in detention centers where conditions are abysmal. Many are awaiting hearings. This is an enormous humanitarian crisis. Detention Watch Network asserts that “the current family detention program is the largest since the internment of Japanese Americans in the 1940s.”

Major civil liberties and immigrant rights organizations have been protesting the unjust, inhumane practice of family detention through demonstrations and in the courts. Regarding the Berks’ detainees, demonstrators displayed banners calling for the release of these women and children and the detention center’s closure on Aug. 15 in Martha’s Vineyard, Mass., where the Obama family was vacationing.