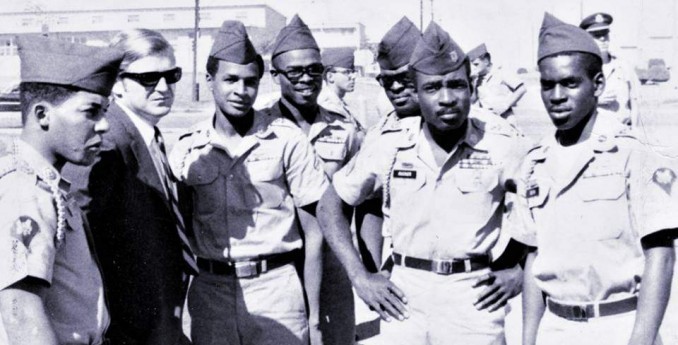 Anger radiated through the barracks when orders reached the Black troops of the 1st Armored Division that they would be sent to Chicago on riot-control duty.

GIs spread a message throughout Fort Hood, Texas, on Aug. 23, 1968: They would meet on the grassy area at the main intersection of the fort to start an all-night discussion. More than 100 GIs showed up to plan what to do. It was more than a rap session. It was a protest.

To the generals and colonels whose orders allowed no refusal, it was mutiny.

Some of the GIs had won medals for bravery. Some had been wounded. After a year of heavy combat in Vietnam, the fed-up Black troops were outraged at being ordered to occupy African-American neighborhoods in Chicago.

What these soldiers believed — and it was true — was that the government feared a Black uprising and planned to use the U.S. Army to shoot down their sisters and brothers.

Some of the Black GIs had been among those sent to Chicago in April 1968 to do “riot control” after Dr. Martin Luther King’s assassination sparked a mass Black rebellion. Chicago’s Mayor Richard Daley told them then that they should “shoot to kill any arsonist and to shoot to maim or cripple anyone looting.” (chicago68.com)

Now Chicago was the venue for the 1968 Democratic National Convention. Rebellious youth were coming by thousands to protest the Vietnam War. “Boss” Daley wanted federal troops on hand to shoot down Black people should the anti-war protest spill over into the Black community.

With their midnight meeting, the Black GIs were saying, “No way!”

GI revolts in Vietnam — and the U.S.

A week earlier, on Aug. 13, Black Marines at the Danang brig in Vietnam tore the place apart and burned a cellblock. It took a force of MPs firing shotguns to crush the rebellion among the 228 unarmed men.

Also in Vietnam, at U.S. Army prison Long Binh Jail on Aug. 20, a band of prisoners rushed the gate between the medium security section and the main administrative part of the compound. Then they broke through. They proceeded to burn down the building, which contained all their records, and nine other large buildings. Black soldiers led this revolt.

Back in the U.S., the Black GIs at Fort Hood were rising up. They knew they would be ordered to shoot their own people if sent to Chicago. During the July 1967 mass rebellion in Detroit’s Black community, Michigan Gov. George Romney had ordered in the Michigan National Guard and President Lyndon Johnson deployed the 101st Airborne. Some 17,000 troops fired 155,000 rounds at the population, killing most of the 43 people who died during the struggle.

That same month in Newark, N.J., the National Guard entered the city and was responsible for most of the 26 deaths there.

At Fort Hood, as Black GIs met all night resisting orders, the commanding officer of the 1st Armored Division, Maj. Gen. John Boles, tried to talk the men back to their barracks. That failed. The provost marshal, Lt. Col. Edwin Kulo, came out among the troops several times between 3 a.m. and 6 a.m. and “instructed” them to go back to their barracks for their own good.

The Black GIs stayed strong: No commands from an officer would change their decision to refuse to kill their people. Hours passed. Orders went out to the military police: “Arrest them at dawn.”

At 6 a.m., two MP companies were ordered to clear the grassy area where the soldiers were meeting. They arrested 43 soldiers and took them to the post stockade and then to the stockade annex. When the troops refused orders to enter this prison, MPs attacked and beat them, injuring some. One who had been wounded in Vietnam had the stitches on his kidney reopened.

When the dust cleared, 43 Black GIs were under arrest. Thirty-one faced special courts-martial, with a maximum sentence of six months in prison. The other 12 faced general courts-martial that could bring much longer sentences. The officers considered six of those 12 the “ringleaders.” They faced years in prison.

They were to be tried by officers under the command of the ranking officers of the division. In the normal operations of the Army, if the generals want convictions, they get them — if the defendants are isolated. In this case, however, the defendants had support.

In the summer of 1968, I was circulation manager of The Bond, the monthly newspaper of the American Servicemen’s Union, an anti-war and anti-racist organization of low-ranking GIs. As of mid-1968, the union had some 4,000 active-duty members and about three times that number read each issue of The Bond.

The ASU’s founder and chairperson, Andy Stapp, and I were in the union office on Saturday morning, August 24, 1968, doing paperwork and discussing whether to go to the anti-war protest at the DNC. Cars were leaving that day from New York.

The phone rang. Stapp picked it up. After a few seconds, he signaled for me to get on the extension. A Spc.5 from Fort Hood, Texas, was on the call. He told us of the arrests that morning.

One look between us and we knew this was our priority. I kept getting more details while Stapp called up the National Emergency Civil Liberties Committee — an organization of progressive attorneys. They told Stapp to get the names of the arrested GIs.

It was the kind of lucky break in organizing that comes from hard work. The GI, who lived on base, called us because he had just seen an article in the August 1968 Esquire Magazine based on an interview with Stapp and “knew right away I had to join this union.” His Black MP friend would transmit the names to this GI’s spouse, who would call them in to us.

By the end of the weekend we had civilian attorneys for the GIs and were sending out the first press releases.

We managed to visit the six “ringleaders” on Sept. 7 and get their stories before the MPs ran Stapp and me off the base. They served Stapp with an order barring his return.

Four days later, Stapp and two other ASU staff GIs, Bill Smith and Richard Wheaton, were arrested by the local sheriff in Killeen, Texas. They were fined the $600 they had with them after being found guilty of “vagrancy.” (This sum was roughly equivalent to $4,000 in 2016.)

The trial of the six ‘ringleaders’

The military officers running Fort Hood knew they had a problem with the 43 Black GIs arrested: If they just let everyone go, it might encourage further resistance. But a hard crackdown could arouse sympathy, bring more publicity and spark further resistance.

They made a quiet concession. Fort Hood’s courts-martial allowed the defense to use a legal technicality to get many of the troops off without serving time. Some others got sentences ranging from three to 11 months.

The technicality was that some of the GIs were in an automobile and thus couldn’t hear the order to disperse. During different courts-martial, a couple dozen GIs were “placed” in that car.

For their attorney, the ASU lined up Michael Kennedy, one of the most effective defense attorneys for political cases at that time. During the 1960s and 1970s, Kennedy represented Black Panther leader Huey Newton as well as members of the American Indian Movement involved in the epic 1973 struggle at Wounded Knee in South Dakota.

To avoid the Killeen sheriff, our ASU delegation stayed at the on-base home of the GI and his spouse who had called in the names to the ASU. This hospitality was a sign of support for the Black troops among the other soldiers on the base, including some of the white troops.

Life Magazine and the New York Times had reporters at the trial, and our delegation covered the court-martial for The Bond and Workers World newspaper.

“[In statements to the courtroom,] Pfc. Guy Smith … told the court, ‘I demonstrated against Army policy here and in Vietnam. … There is racism and prejudice here. General Boles said he would do something about it, but nothing has been done. … There are clubs in Killeen [the base town] where Black GIs can’t go. … The Black man has been held back because of his color. Your convictions add to the injustice.’ …

“The court-martial of six Black GIs who demonstrated along with 100 others against racism and riot control duty ended here tonight after four days. Two men were acquitted, two got sentences of three months hard labor and the others received bad conduct discharges. The sentences, considerably less than the maximum, were an indication of the Army’s fear that harsher punishment might backfire and lead to open rebellion. …

“Morale was high as the men left the courtroom, shaking hands and gathering around the jeep that was to take Henry to the stockade. The relatively lenient sentences were a victory — not of justice, but of the strength and determination of the Black soldiers not to be used against their brothers.”

Kennedy, the six GIs and the ASU delegation celebrated the successful outcome. Even the GIs who had to spend a few months in the stockade said they felt they had won.

For the Pentagon, what the Black GIs did was a direct challenge to the chain of command.

The goal of the founders of the ASU was to break the chain of command by forming an organization that represented the rank-and-file soldiers. ASU organizers knew that in 1968 they would most likely find command-defying attitudes on a mass scale among Black GIs who identified with the Black Panthers or other Black liberation organizations backing national liberation struggles worldwide.

The ASU not only endorsed the rebellion of the Black troops. To further shatter ties to command, the ASU succeeded in convincing others, including white GIs, to express solidarity with Black resistance.

The lesson for the Pentagon was that the conscripted Army, especially one politicized by an unpopular war, might be unreliable if used against rebellions in the African-American communities in the United States.

The lesson for revolutionaries was that it was possible to weaken the main repressive organ of the imperialist state, the U.S. Armed Forces.

Based on a chapter in Catalinotto’s forthcoming book, “Turn the Guns Around: Mutinies, Soldier Revolts and Revolutions.”