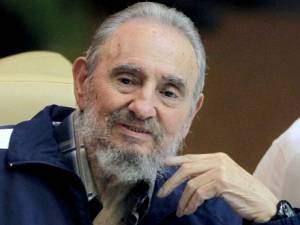 People everywhere celebrated the 90th birthday of Fidel Castro — the historic leader of the Cuban Revolution — on Aug. 13.

Since its socialist revolution in 1959, Cuba has been a beacon of hope for every poor person. Capitalist New York City, home to Wall Street, has over 25,000 homeless children, but every child in socialist Havana has a home.

While the Pentagon has 800 military bases occupying the world, and continues to occupy Guantanamo Bay in Cuba, socialist Cuba trains and sends doctors to other countries. Socialist Cuba converted an old naval academy into the Latin American School of Medicine. Even the White House had to commend the courageous Cuban health workers who fought Ebola in Africa last year. Cuban medical workers have restored the sight of hundreds of thousands throughout Latin America in “Operation Miracle.”

Women have full equality and their own organization, the Federation of Cuban Women, founded by former guerilla fighter Vilma Espin. LGBTQ rights are advancing in Cuba. As noted by transgender warrior and WWP managing editor Leslie Feinberg more than two decades ago, “Cuba’s National Center for Sex Education carries out its important collective labor — including combating what remains of pre-revolutionary prejudice against same-sex love.”

None of this could have happened without Fidel Castro’s leadership of the struggle that overthrew the U.S.-backed dictatorship of Fulgencio Batista on Jan. 1, 1959. Before that, beautiful Cuba, the pearl of the Caribbean, was just a giant sugar plantation and casino for Wall Street.

History has absolved him

After Batista staged a military coup in 1952, Fidel led revolutionaries, including his brother Raúl, to attack the Moncada military barracks in Santiago on July 26, 1953.

Like John Brown’s raid on Harper’s Ferry in 1859, the heroic assault on the Moncada was defeated. Most of the revolutionaries were tortured and killed.

Fortunately, Fidel Castro survived. Put on trial by dictator Batista, Fidel electrified the Cuban people with his “History Will Absolve Me” speech to the court.

Batista was forced to release Fidel and the other survivors two years later. Fidel and his comrades went to Mexico where they met Che Guevara and organized a new revolt. The revolutionaries came back on the boat “Granma” and landed in eastern Cuba on Dec. 2, 1956.

Only 12 of the revolutionaries survived the landing. A two-year revolutionary war followed. Despite being supplied with planes and bombs by the Pentagon, Batista’s army crumbled, and he finally had to flee Cuba on Jan. 1, 1959. The island was liberated from his bloody dictatorship.

One of the first acts of the Cuban revolutionaries entering Havana 57 years ago was to tear down the “whites only” signs on the beaches. The Cuban Revolution was a tremendous victory against racism.

The Cuban people were on the move. They took over U.S.-owned sugar plantations and nickel mines. Wall Street couldn’t tolerate a new law that limited the bill for rent and utilities to 10 percent of a Cuban family’s income.

Often using gangsters whose casinos had been seized, the banksters’ CIA has staged over 600 assassination attempts against Fidel Castro.

Forces trained and armed by the CIA invaded Cuba at Playa Girón (the Bay of Pigs) in April 1961. The Cuban people gave U.S. imperialism its first defeat in this hemisphere. Fidel Castro declared, “What the imperialists cannot forgive us, is that we have made a Socialist revolution under their noses.”

The Soviet Union and other socialist countries gave crucial assistance to Cuba.

When the Cuban delegation came to the United Nations in 1960, Fidel Castro moved them to Harlem’s Hotel Theresa where he met with Malcolm X.

Cuba welcomed Black Panthers and other revolutionaries fleeing the FBI. Mabel Williams and Robert Williams — who had organized armed self-defense against the Klan in Monroe, N.C. — broadcast “Radio Free Dixie” from Havana.

Apartheid South Africa invaded the People’s Republic of Angola in 1975 with the approval of Vice President Nelson Rockefeller and his employees, President Gerald Ford and Secretary of State Henry Kissinger.

Cuba helped Angola drive back these neo-Nazi invaders in Operation Carlota, named after a Black Cuban woman who led a slave revolt in 1843. Though the slave masters had Carlota torn apart by horses, she was avenged by tens of thousands of Cuban women and men who volunteered to fight the fascist armies of South Africa’s apartheid regime.

Alongside their Angolan and Namibian sisters and brothers, the Cuban volunteers in 1988 defeated the racist invaders at Cuito Cuanavale in southern Angola. Two years later Nelson Mandela walked out of prison. The apartheid regime was being torn apart by the African National Congress.

U.S. cops are killing Black and Latina/o people wholesale. Even when their murders are recorded on video tape, like Eric Garner moaning “I can’t breathe,” these killers go free. Batista’s police also killed and tortured, but police brutality came to an end in Cuba in 1959. Batista’s killer cops and secret police were put on trial in baseball stadiums and given people’s justice. That’s what needs to happen in the U.S. Today Cuban police are genuine public safety officers who don’t usually carry guns.

Despite the U.S. reopening diplomatic relations with Cuba, it still maintains the cruel economic blockade that has cost Cuba hundreds of billions of dollars. Let’s celebrate Fidel’s birthday by demanding that this economic warfare be stopped.

End the blockade! Cuba is our friend!