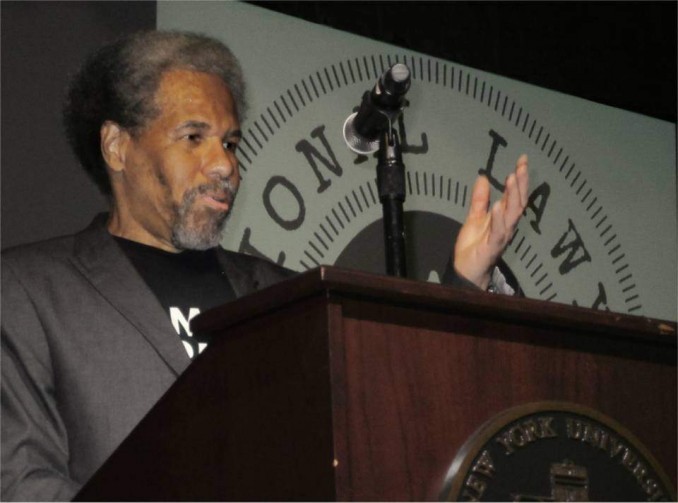 Former political prisoner Albert Woodfox was given an award by the National Lawyers Guild on Aug. 4, as everyone in the hall rose to their feet, cheering and clapping. Some 500 people attended this event and saw the honoree given the Arthur Kinoy Award during the Guild’s 2016 Law for the People Convention, held at New York University’s School of Law.

For nearly 44 years, Woodfox was imprisoned in a 6-foot by 9-foot cell for 23 hours a day in Louisiana’s notorious Angola prison for a crime he did not commit. He was the last remaining incarcerated member of the Angola 3, prisoners sentenced to outrageous prison terms and held in solitary confinement for decades due to their affiliation with the Black Panther Party and their opposition to the prison’s racist and oppressive practices. Their horrific conditions sparked an international movement calling for their freedom.

When Woodfox was finally freed on Feb. 19, his 69th birthday, he committed himself to fight for prison reform and an end to the “barbarous” punishment of solitary confinement. Today, 80,000 people are held in administrative segregation in U.S. prisons.

‘I am Herman Wallace’

During the ceremony, Woodfox wore a T-shirt which read: “I am Herman Wallace.” Wallace was another of the Angola 3, held in isolation for 41 years, who obtained his release from prison only three days before he died of cancer in October 2013. Woodfox recognized from the podium Robert King, the first of the three to be released in 2001, after 29 years in solitary. King is Woodfox’s steadfast friend, who fought for his release for 15 years. He also thanked his attorneys, George Kendall, Carine Williams, Robert McDuff and Billy Souther, for fighting so hard for his freedom.

Woodfox told the gathering he didn’t want to be remembered for the “44 years of torture and hell” he endured, but as a fighter for social justice. He asserted, “If the cause is noble, you can carry the weight of the world on your shoulders.” This heroic freedom fighter said he’d even do it again, if necessary.

When Woodfox emphasized the importance of the Black Lives Matter movement to the multinational group of varying ages, many of them young, enthusiastic applause and cheers rang out. He ended his remarks with a call to “Free Mumia Abu-Jamal, Leonard Peltier, Sundiata Acoli, Russell Shoatz and all political prisoners!” The crowd then rose to their feet in a final rousing standing ovation for the beloved Albert Woodfox.

That evening, the Guild also presented the National Immigration Projects Award to nationally known attorney Javier Maldonado. At other sessions, Soffiyah Elijah received the Law for the People award and Noelle Hanrahan, director of Prison Radio, was the beneficiary of the Legal Worker Award. Audrey Bomse, Emily Bock and Michael Deutsch were also recognized as lawyer-activists fighting for human rights and social justice.

Woodfox and King participated in the Guild’s workshop on “Solitary Confinement: How to Build a Movement to End the Torture of Solitary Confinement,” on Aug. 7. The next day, they attended a book signing for “From the Bottom of the Heap: The Autobiography of Black Panther Robert Hillary King,” (PM Press, 2012) at the 1199SEIU hall in New York.

And then, continuing on their mission to stop the cruel punishment of solitary confinement, Woodfox and King will attend several more political events in the U.S. and abroad. They also plan to be at the 50th anniversary gathering of the Black Panther Party in Oakland, Calif., in October.

Woodfox thanked his worldwide supporters for resolutely keeping up the struggle for his freedom in an interview posted at angola3.org/blog/. He emphasized: “What [supporters] should take away from my freedom is that you stand. You don’t back away. You don’t make unnecessary compromises. You stand, and no matter how painful, you stand.”

Anne Pruden, a longtime activist and supporter of the Angola 3, contributed to this article.