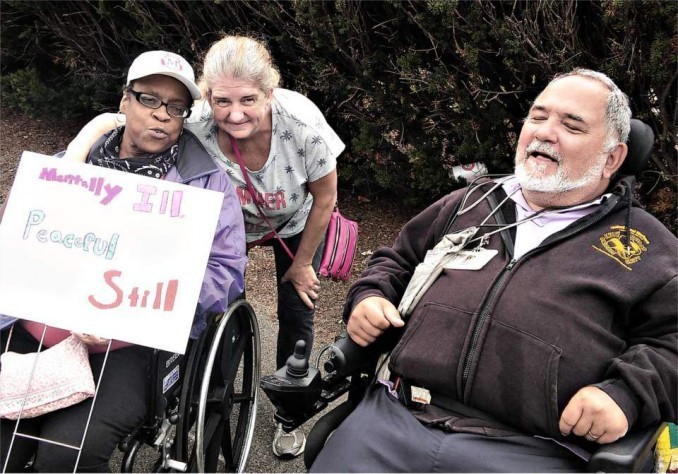 First, there were one or two. Then, a few dozen. By 3 p.m. on Monday, Aug. 1, hundreds of people with mental health and other disabilities from all over the state of Massachusetts were picketing the headquarters of the Boston Globe.

They were outraged over the newspaper’s sensationalistic and stigmatizing recent frontpage story, a supposedly in-depth study of the challenges faced by people with disabilities, which was actually one of a series of such articles demonizing people with mental health issues. The news feature story justified police assaults against people with mental health diagnoses, suggesting that they are prone to violence.

On the contrary, in Massachusetts hundreds have died at the hands of the police, by being put in harmful restraints and by suicide, in recent years. Despite this terrible toll on the community, the “liberal” Boston Globe focused on homicides involving people who may only have been suspected of having a mental health diagnosis, asserting that police involvement was necessary to protect the public.

In a well-organized action, the mental health community and other people with the lived experience of disability turned out to picket the Globe for more than three hours. Peer leaders and members of recovery clubs, M-POWER, ADAPT, the Boston Center for Independent Living, Recovery Learning Communities and others from across the state of Massachusetts came out in force. A handful of nonprofit agency staff were present.

This action, unprecedented for its large turnout, was a pure fightback by the rank and file for the very survival of their community. Nine of their number occupied the Globe entrance and were arrested by Boston police, who had a state police contingent “on the ready” nearby. One protester had his banner ripped out of his hands by a Globe security employee and fought back to retrieve it, only to be the first arrested, put in handcuffs and placed in the police wagon by Boston police.

The crowd’s anger grew louder as one by one their brothers and sisters were arrested. No Globe reporter took a photograph or interviewed one person in the aftermath of this scene of terror unleashed on the community.

Denise Jackson and Brian Shea helped organize the action and joined with other leaders of the protest to confront Scott Allen, the author of the original Globe article, earlier in the day. “We told him he didn’t do enough research. He should have interviewed community leaders. I just wish I could have been arrested today,” Denise Jackson told Workers World.

The community also protested the recent decision of MassHealth, the state’s Medicaid and children’s health insurance program, to disallow overtime pay for personal care attendants. Some 35,000 of these attendants belong to District 1199/SEIU, the single largest Service Employees union in the state. The decision is very harmful to people with disabilities, who depend on quality care from the same PCA they have worked with over the years, but who now may not be available. This is a basic survival issue.

Longtime activist Brian Shea said: “People are continuing to organize. This is just a start, a resurgence. This is just further proof that wherever there is oppression, there is struggle.”