The California Labor Federation represents 2.1 million union members of more than 1,200 AFL-CIO and Change to Win unions. Delegates at its 2016 Biennial Convention, held on July 12-13 in Oakland, Calif., passed a Cuba solidarity resolution submitted by the Sacramento and North Bay Central Labor Councils. 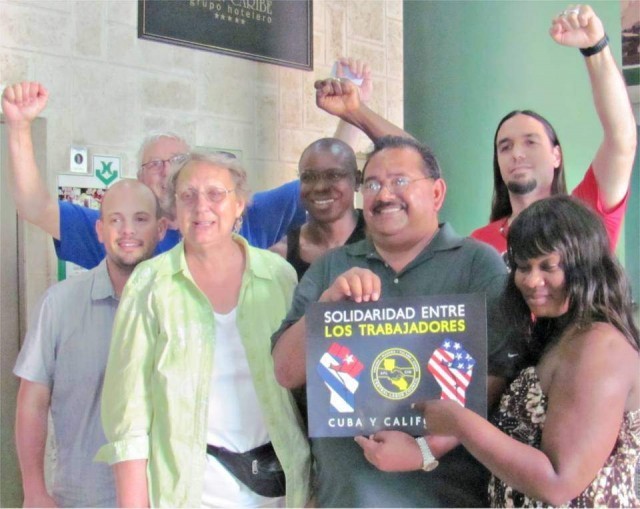 A few members of the U.S. union delegation to 2016 May Day celebration in Cuba with “Worker Solidarity – Cuba and California” sign.

The resolution recognizes the new opportunity for building relationships between workers in the U.S. and workers in Cuba and how the exchange of ideas and information will be beneficial to all. The resolution calls on affiliates to contact elected officials, asking them to “officially endorse unrestricted travel to Cuba, … eliminate the embargo of Cuba without conditions and … support the elimination of the Guantánamo Bay U.S. military base.” Further it calls on union committees endorsing candidates for Congress to visit Cuba for May Day celebrations in 2017. The resolution was forwarded to National AFL-CIO President Richard Trumka, with a proposal that it be forwarded to each state AFL-CIO federation. Read the resolution at bit.ly/2aDbPbQ.

The resolution was propelled by a strong union delegation that traveled from California to Havana to see Cuba for themselves during the May 1 International Workers Day Celebration there.

Discussing solidarity with Cuba is easier now than it was before Dec. 17, 2014. That is a date to remember, when the remaining three of the Cuban 5 were freed from U.S. prisons, returned to their Cuban homeland, and the U.S. agreed to work toward normalizing relations it had broken more than 50 years before. A few unions, most notably the International Longshore and Warehouse Union, refused to get in line with imperialist foreign policy and maintained relations with Cuban port workers and the Central Union of Cuban Workers (CTC) after the 1959 revolution, and then supported freedom for the Cuban 5. The Steelworkers and Service Employees unions both allowed Cuban 5 literature to be distributed at international conventions.

Union resolutions and city council proclamations are important in the struggle to end the commercial, financial and economic blockade of Cuba, especially if used as a means to educate and mobilize action supporting Cuba’s right to independence and sovereignty and its right to choose a socialist economic system that makes solving human needs the priority.