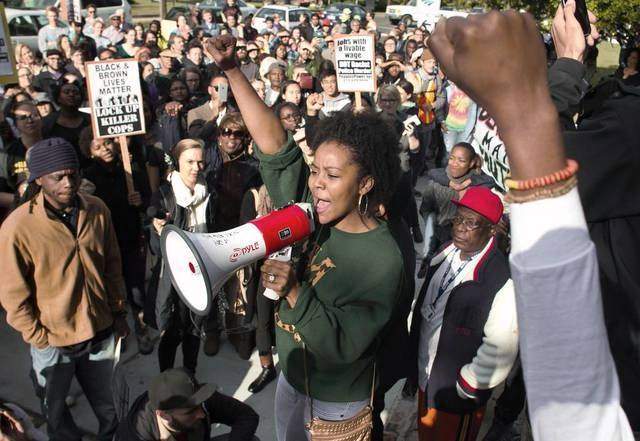 There is a specter haunting America.

The defeat of Bernie Sanders struck a nerve with a large portion of U.S. progressives; it left an insatiable Bern. The socialist hopefuls, who experienced a dream deferred, suffered insult upon injury on realizing their candidate was robbed of his nomination through inner-party corruption. They realized that between media-aided conspiracy and a collective effort by the Democratic Party to intentionally ensure the election of Hillary Clinton, Bernie’s overwhelming pledged delegates never stood a chance. The concentrated effort to defeat Bernie illuminated that the status quo is afraid of a new consciousness growing in the United States.

What now? The Democratic Party, as well as leaders of the modern-day and past Civil Rights Movement, former champions of moderate socialism, minority heroes from various political arenas, politicos on the left and pundits are all guilting the “Bernie or Busts” into rallying behind their enemy. Their rationale is that the current Democratic nominee is the only hope the U.S. has for progress leading into 2017.

Even some who sat in awe of Michelle Alexander’s lectures, as she eloquently and firmly made the case that the Reagan, Bush and Clinton administrations were responsible for “the New Jim Crow,” have departed from her, to join #WithHer. Even some who commended the bravery of Ashley Williams, a Black queer organizer from Charlotte, N.C., who confronted #Her for referring to Black people as “super predators,” left to rally #WithHer. Bernie or Busts are not the traitors to progress. Their critics, who abandoned their former pro-liberation direction, are more so.

What Bernie or Busts, and even former Bernieites in general have revealed is that there is a slow but real yearning in the U.S. for something new and different. Even the guilting strategy of herding the extreme left to the middle, in hopes of avoiding the extreme right, does not erase the reality that a large population is extremely dismayed with the choices of two racist corporate capitalists. The people are waking up. Even the introduction of the term “revolution” into the rhetoric of this election reveals that there is a different consciousness underlying the direction a large population is moving towards.

What the Bernieites heard from the Sanders campaign was someone speaking to the issues of the working class. He addressed the crisis of poverty, the wealth disparity, the discrimination against marginalized people, the costs of wars overseas and the consequences of corporate influence. He traveled with the daughter of Eric Garner before the #MothersoftheMovement, he fully embraced the #Fightfor15, and touted a campaign for workers’ rights.

This is not to say that he is not a privileged, older, white man who could only see as far as his own experience could allow. But he raised the U.S. consciousness higher than any candidate who came as close as he did to clenching the Democratic Party’s nomination. Neither he nor his supporters were incorrect in their observation of certain issues facing the working class.

Where do those supporters go? Though it may seem there is no other choice for the believers in Bernie’s America, this is hardly the time for those who were compelled by the radical aspects of the Sanders campaign to abandon their thinking in order to flee towards moderate “progress.” That would only reinforce that Bernie’s views are too extreme and progressive for what the U.S. working class needs. The unfolding of this capitalist, Wall-Street-influenced, rigged election is affirmation that there can be no justice for the people without a bona fide working-class led revolution. The current system is literally incapable of escaping the reinforcement of capitalist influence. Not even attempting to play by the rules of democracy is enough to appease the ruling class into submitting to the voices of the working class.

There is a clear yearning and willingness to reroute from America’s capitalist pattern of electing bigoted, neoliberal corporate puppets; this is an unsettling reality to the powers of the ruling class. The demonizing of Black Lives Matter, suppression of the workers’ struggle, the attacks on LGBTQ liberation and the silencing of the Bernie or Busts point to a specter haunting America — a momentous pro-socialist movement.

To those who recognize that capitalism is literally killing the proletariat — the working class — do not abandon what you have seen, heard and experienced with your own bodies. Now is the time to join a worker-led movement that centers the liberation of all oppressed and marginalized people: Black, Latinx, Native and LGBTQ. Show your unwillingness to back down from the pressures of the mainstream. For the Bernie or Busts, there is no Bernie, so you must hold true to your cause and proceed with the Bust.

Many have moved to supporting the efforts of Workers World Party, a party working globally to accomplish bringing the power to the people and refusing the intimidation of imperial forces — an organization confronting racism, homophobia, islamophobia, xenophobia and the increasing symptoms of capitalism and patriarchy.

For those who have posed the question, “If you don’t vote for Hillary, what’s your solution?” here it is: Divest from capitalism, support the revolution, and let the working class, the oppressed, the vanguard, be the leaders of the radical change we need.