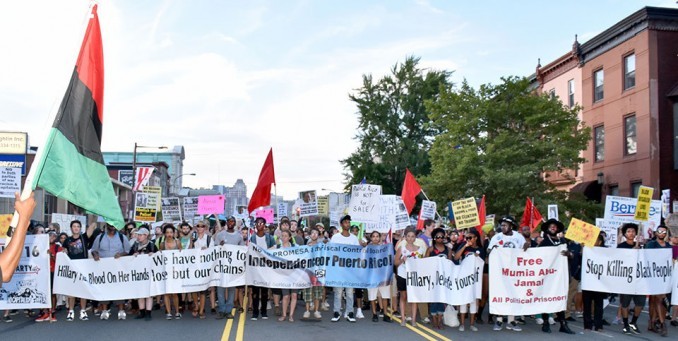 “Don’t vote for Hillary, she’s killing Black people!” a thousand protesters chanted over and over as the Black DNC Resistance March against Police Terrorism and State Repression ensnared midday traffic while they rallied and marched through North Philadelphia’s Black community.

The July 26 march was timed to coincide with — and disrupt — the 2016 Democratic National Convention in Philadelphia. The Philadelphia Coalition for REAL (Racial, Economic and Legal) Justice, a Black-led group of progressives, anti-racists and anti-capitalists organized against police occupation and murders of Black and Brown people, called the march.

The march kicked off with a rally in the Cecil B. Moore neighborhood of North Philadelphia. Anti-gentrification activists from the “Stadium Stompers” joined the rally. The latter group is fighting Temple University’s latest attempts to build a football stadium that would further displace Black and working-class communities.

The Philly Coalition for REAL Justice connected the nationwide onslaught of gentrification in historically Black communities to the epidemic of police violence. Speakers read the names of police terrorism victims one-by-one, passing out dozens of signs bearing those names.  “Who will carry this name?” asked Erica Mines of REAL Justice after reading each name. “We will!” responded the crowd each time.

Several Puerto Rican flags could be spotted within the gathering.  \The Comité Boricua Filadelfia-Camden (Philadelphia-Camden Boricua Committee) contingent marched in support of Black Resistance behind a banner calling for independence for the U.S. colony of Puerto Rico.

Cephus Johnson (aka Uncle Bobby), whose nephew Oscar Grant was shot and killed in 2009 by cops in Oakland, Calif., gave an impassioned speech exposing police as protectors and servants of the racist state, not the people.

Asa Khalif, whose cousin Brandon Tate-Brown was killed by Philadelphia police in December 2014, called for a revolutionary movement to overthrow the system of white supremacy.

The Black and Brown Workers Collective, representing nonprofit sector workers, and the Palestinian resistance movement were also represented in the ranks of protesters, as well as low-wage workers from Fight for $15.

A United Nations special rapporteur on the rights of freedom and assembly met with REAL Justice members to discuss state repression in the lead-up to the protests and then joined the march. The U.N. representative later witnessed police helicopters flying just above the sound car, attempting to drown out speakers, including Teresa Shoatz, daughter of famed political prisoner Russell Maroon Shoatz.

Marchers poured into Philadelphia’s streets to walk more than two miles in 94-degree heat to City Hall in Center City.  Food Not Bombs activists and volunteers supported the event by preparing and passing out hundreds of bagged lunches and bottled water to marchers.

‘Shut Down the DNC’

Several hundred more protesters gathered at City Hall for a Shut Down the DNC rally. Larry Holmes, with the New York City People’s Power Assembly, appealed to Sanders supporters among the crowd, saying for their movement to be relevant beyond the Democratic National Convention it must embrace the Black Lives Matter movement.

Palestinian author and activist Susan Abulhawa and Brandon Do with Temple Students for Justice in Palestine denounced Hillary Clinton and the DNC for their continued support for Israeli occupation of and repression in Palestine.

Speakers also criticized Clinton’s support of drone strikes, her backing the overthrow of governments in Haiti, Honduras, Libya and Syria, and her labeling of Black youth as “superpredators.”

Scott Williams, a march organizer, gave a brief history of the Democratic Party’s legacy in support of slavery, racism and wars.

When the Black DNC Resistance March arrived at City Hall, the crowd from the Shut Down the DNC rally surged into the streets to join them. Standing on the back of a pickup truck amidst a sea of people, signs and red-black-green flags, members of the REAL Justice Coalition delivered speech after explosive speech exposing Hillary Clinton, the Democratic Party and U.S. imperialism as enemies of all working and oppressed people.

In a strong show of Black and Brown solidarity, a migrant contingent joined in carrying a Dismantle ICE (Immigration and Customs Enforcement) banner.  Fernando Lopez, with the New Orleans Workers Center for Racial Justice, led the crowd in chanting “Dismantle ICE, Defund the Police.”

Marchers again took to the streets for yet another dynamic and spirited march to the Wells Fargo Center in South Philadelphia where the DNC was being held.

As the march neared the convention site, the chanting, militant crowd forced a line of motorcycle cops trying to block the street to turn around one-by-one. The protesters pushed forward toward the DNC, with their leading vehicles forcing police cars with flashing red lights and blaring sirens to back off and retreat.

Meanwhile, hundreds of supporters of Vermont Sen. Bernie Sanders, including those who had walked out of the convention, marched toward the advancing Black Resistance demonstrators while chanting “Black Lives Matter!”

At the end of the eight-hour march, Cornelius Moody of REAL Justice urged Sanders supporters to return to their communities to actively support the Black-led movement.

From July 23-29, an estimated 13,000 protesters took part in some 60 rallies, marches, indoor meetings and civil disobedience actions in Philadelphia against the DNC and Hillary Clinton. Several were for Sanders, fueled by Wikileaks exposure of emails showing that Democratic Party leaders manipulated the primary elections in Hillary Clinton’s favor.

These marches also targeted Clinton for wavering on rejection of the Trans-Pacific Partnership trade pact and for her legacy of promoting U.S. imperialist policies on a global basis. Indoor gatherings also addressed the problems of Islamophobia and the Israeli occupation of Palestine.

Before the convention opened on July 24, Indigenous activists led about 8,000 people gathered at City Hall for a March for Clean Energy. Many signs opposed fracking and the construction of oil and gas pipelines like   Keystone XL.

On the DNC’s opening day, July 25, the Poor Peoples’ Economic and Human Rights Campaign led a March for Our Lives. This action focused on the issues of long-term and widespread poverty in Philadelphia, the student debt crisis, epidemic and untreated drug addiction, and the lack of affordable health care. Earlier in the day immigrants marched for their rights and against ICE raids (see separate article on this issue).

Philadelphia officials initially tried to limit public opposition to the DNC and Clinton by denying permits for marches, especially in Center City during morning and afternoon rush hours.  The city was forced to back down after demonstrators held a press conference in late June and a legal action by the Pennsylvania American Civil Liberties Union.