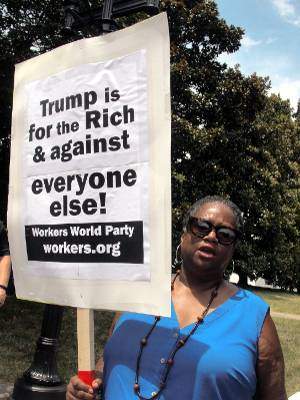 In one of the largest protests in recent Roanoke history, a diverse rainbow of community members sent a clear message on July 25: There will be resistance to the anti-worker racism of Donald Trump and his vice presidential running mate Mike Pence in Southwest Virginia.

Standing for hours in sweltering 90-plus degree heat, protesters held signs slamming Trump, Pence and their supporters, and chanting, “No Trump! No KKK! No Racist Fascist USA!” and “Don’t give in to racist fear! Immigrants are welcome here!” The two candidates were in the city for a campaign event at the Hotel Roanoke and Conference Center.

Demonstrators came from unions and worker rights organizations, including the Food and Commercial Workers, the Virginia Professional Staff Association and Fight for $15.  They were joined by members of the Plowshare Peace & Justice Center, Community Cultivators Inc., 15 Now Roanoke, Black Lives Matter and Workers World Party.

The demonstration also included young children, high school and college students, and teachers protesting for the first time.  Many Roanoke residents are fed up with Trump’s anti-worker hate and racism.

A statement by protest organizers on their Facebook event page read: “Donald Trump and vice presidential running mate Mike Pence are the racist enemies of all poor and working people. Both candidates attack women, the LGBTQ community, immigrants, Muslims, the disabled and the Black Lives Matter movement. And they don’t speak or care for white workers either.

“Trump is long known for attacking workers and their unions. Indiana Gov. Pence, like Scott Walker in Wisconsin, has waged a Jim Crow war on workers in Indiana with specific attacks on unions, eviscerating many hard-won worker protections and rights.

“Both candidates promote the privatization of public education and other public services. Roanoke is a working-class, diverse city that needs union jobs and resources for our neighborhoods, not the racist anti-worker hate and division that Trump and Pence are whipping up.”

Numerous participants kept protesting during Trump’s speech and confronted his supporters again when the speech was over. Then a contingent led by mostly youth and students marched from the protest site through downtown Roanoke demanding freedom, justice and equality for all poor and working people.

The protesters vowed that every time Trump or Pence plan an appearance in Southwest Virginia they will be confronted. During the July 25 protests and in the days following, photos and videos taken during the protest were “liked” and shared through social media thousands of times, breaking through a virtual corporate media whiteout of the protest.

The July 25 protest is the second major protest against Trump in Southwest Virginia this year. In February, hundreds of students and other community members confronted Trump and his supporters at Radford University in Radford, Va., disrupting his speech multiple times.

Outside of the auditorium, they conducted picket lines with banners reading “Donald Trump: Tool of the Rich — Racist Enemy of All Workers.” Placards read “Trump Is for the Rich and Against Everyone Else” and “Trump Doesn’t Speak for White Workers.”