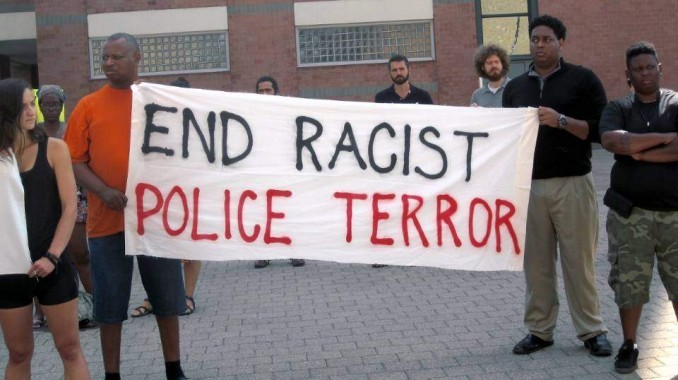 On the evening of July 28, longtime community activist Maurice “Mo” Crawley was working as a Syracuse neighborhood anti-violence monitor with the group O.G.’s [Original Gangsta’s] Against Gun Violence. He was live-streaming two Syracuse cops across the street as they arrested a Black man, commenting while streaming that this was to make sure the cops were not doing anything they should not be doing. Suddenly, one of the cops rushed Crawley, threatened him, threw him to the ground and arrested him. It is not illegal to videotape police in New York state.

Twelve hours later, Black Lives Matter Syracuse New York rallied in front of the Onondaga County so-called “Justice Center” to protest the brutal and illegal arrest. SeQuioa Kemp, a BLM organizer, denounced “the myth that Black people don’t care about each other.” White supremacist arguments about violence in Black communities are often used to justify racist police violence. “But,” Kemp noted, “when someone like Mo goes out every day to protect Black lives, look how he is treated by the police!”

Herve Comeau, a BLM media liaison, said, “The city, the mayor and the police chief have suggested that hiring Black police officers would solve the problem. It would not! The problem is state-sanctioned violence against Black and Brown bodies.” BLM organizer Anthony Harper added, “This is no longer a Black and white issue. It’s an issue of the police and what they are allowed to do in our neighborhoods.”

The crowd was a wide representation of Syracuse communities, including Black, Latino/a, white, Asian, Indigenous and LGBTQ people. Some were workers who’d just gotten off the night shift. In conversations during the rally, many spoke informally about how they had lost loved ones from police violence. Some said of the police presence in the streets: “It’s like being in prison out in the neighborhoods.”

Given the July 28 rally and a 500-person march on July 18, BLM organizers are answering police retaliation against a Syracuse community denouncing police terror. After a cop shot and killed Terry Maddox, an African-American man, on Father’s Day, the Police “Benevolent” Association flooded local media with accounts blaming the dead man. But many neighborhood witnesses say Maddox was unarmed. Those witnesses have since recounted harassment and trumped-up charges by police pressuring them to change their accounts. (cnyvision.com)

When BLM organizers wrote about the Father’s Day shooting in an op-ed for the Syracuse Post-Standard, editors tried to get them to say that Maddox was armed. Organizers refused and reiterated that witnesses had seen him unarmed.

The battle continues for a public narrative that admits the brutal role of police as the murderous arm of the state. Crawley’s video, posted by BLM-Syracuse, had 45,000 views by the close of the July 28 rally. Crawley was released from custody as the rally was underway — to the cheers of those gathered in solidarity.