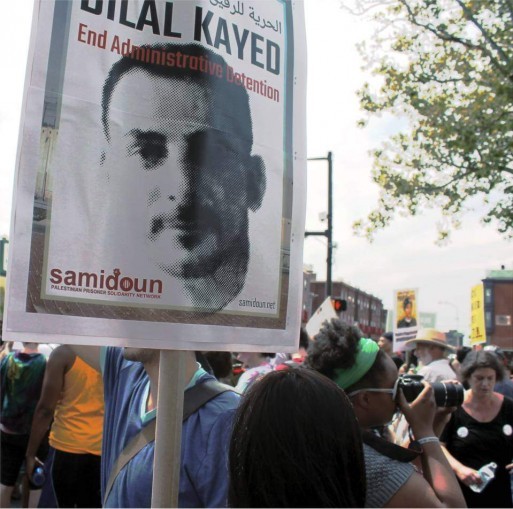 Following is a letter from Mahmoud Kayed, brother of Palestinian political prisoner Bilal Kayed, to the demonstrators at the Democratic National Convention, which Joe Catron of Samidoun: Palestinian Prisoner Solidarity Network read at a July 26 rally in Philadelphia.

Friends in the United States,
Friends everywhere in the world,

We greet you from occupied Palestine, and we thank you for inviting us to deliver this word in the demonstration, and to raise the voice of Palestine in front of the Democratic National Convention in the city of Philadelphia.

Let me first greet you all, on behalf of my family and myself, and convey the greetings of my brother, Bilal Kayed, who is currently on hunger strike for the 42nd consecutive day, imprisoned by Israel. And I greet you on behalf of all of the Palestinian prisoners.

My brother Bilal, as some of you know, has spent 14-and-a-half years in Israeli jails, and when he was scheduled to be released on June 13 — on that date, instead, they sent him back to jail for six months under the law of administrative detention. This criminal colonial law is used by the occupation state, “Israel,” in order to keep the Palestinian leaders and activists isolated from their families and their loved ones and the masses of their people. Today, there are more than 700 Palestinians in detention under this unjust law.

Israel is not only imprisoning thousands of Palestinians in an attempt to crush the will, the spirit and the resistance of the Palestinian people. It is also imprisoning the bodies of the martyrs shot down by the armies of occupation, their lives taken by the colonizers and their bodies frozen, imprisoned, denied to their families.

Today, I extend to you from occupied Palestine, a message of solidarity and support as well, for you in your struggle inside the belly of the imperialist beast, and for your struggle for the freedom of all political prisoners in the United States. Freedom for the imprisoned strugglers for just causes and for liberation, whether they are in the U.S. or Israeli prisons, and anywhere they are where prisoners are being held because of their commitment to defend justice and human dignity, giving years of their life to defend their oppressed peoples and their right to self-determination.

Today, we also raise the call once more to free Georges Ibrahim Abdallah, imprisoned for 32 years in French prisons for his struggle for Palestine.

As Palestinians, we know very well what injustice means, what occupation means and what arrest means.

From occupied Palestine, we salute the struggler Mumia Abu-Jamal and all of his fellow militant Black leaders and political prisoners in U.S. prisons. We are on their side in their struggle and their just cause for freedom and dignity.

The Palestinian Arab people have been struggling for 100 years for the right to live and to reclaim their land and liberate their land and people from colonialism, occupation and racism. And our people have and continue to recognize that our natural position is in the struggle alongside the oppressed peoples, and not alongside states that trample people’s rights, plunder the wealth of the people and impose their will on the impoverished and oppressed peoples.

We emphasize that your role and your struggle in the United States is a central, pivotal and leading role in stopping the Israeli and U.S. policies by:

From your brother, Mahmoud Kayed