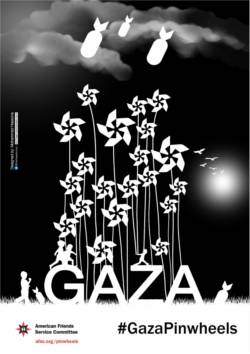 The American Friends Service Committee will honor the victims of Israel’s 2014 military assault on Gaza with the “Gaza Pinwheel Memorial Display,” to be exhibited here during the week of Aug. 9-16.

The memorial will feature 521 black pinwheels, each bearing the name of one of the 521 Palestinian children who were killed by the Israeli military’s “Operation Protective Edge” during the summer of 2014.

The United Nations Independent Commission of Inquiry on the 2014 Gaza conflict reported on June 22, 2015: “The 2014 hostilities saw a huge increase in firepower used in Gaza, with more than 6,000 airstrikes by Israel and approximately 50,000 tank and artillery shells.”

In 51 days of merciless bombing, over 2,100 people were killed, over 11,000 injured, and thousands of houses, schools and hospitals lay in ruins. The AFSC worked with local Palestinian artists in Gaza to help create the memorial following the assault.

AFSC organizer Katie Huerter told WW: “It is important to me that we continue to humanize Gazans and not reduce their suffering to numbers and statistics. Pinwheels represent the childhood that was stolen, and the hope that the spirit of these children will continue in the Palestinian resistance movement.”

The exhibit will be on display for public viewing on the front lawn outside the AFSC Iowa office, located at 4211 Grand Ave. in Des Moines, from 12 noon on Aug. 9 to 1 p.m on Aug. 15.

“We also hope to use this powerful display to call attention to Israel’s attack on Gaza and the Gaza siege,” Huerter added, “to demand accountability for rights violations that occurred in Gaza, to call for an arms embargo on Israel, and to open conversations about boycott, divestment and sanctions (BDS) campaigns.”