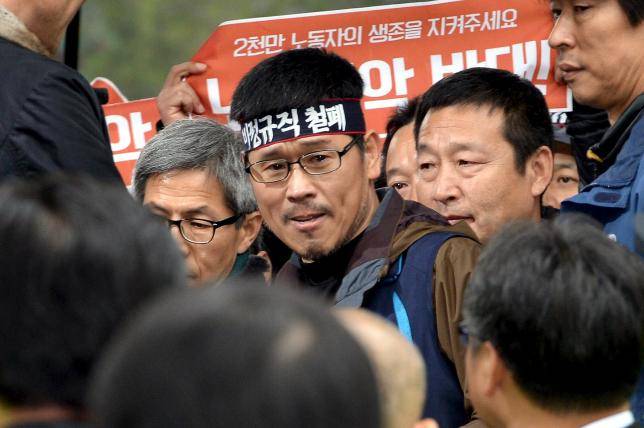 Han Sang-Gyun, the head of the Korean Confederation of Trade Unions (KCTU), surrenders voluntarily to the police in Seoul, Dec. 10.

Han Sang-gyun, president of the Korean Confederation of Trade Unions, was sentenced to five years in prison on July 4. The corrupt courts had previously found him guilty of various charges, all stemming from a Nov. 14 demonstration against anti-labor legislation. The charges carried a maximum sentence of eight years. Han was arrested last December after south Korean police stormed a Buddhist monastery where he had been given sanctuary.

Han came out of hiding to lead the Nov. 14 demonstration after spending months holed up in the KCTU headquarters to avoid being arrested on earlier charges. Tens of thousands of Korean workers came out that day to protest legislation that would force more of them into precarious work, making them temporary contract workers with no job security or minimum wage protections. Other KCTU leaders also face jail time in connection with that action.

Han is a heroic autoworker, who led the Korean Metal Workers Union when the union conducted a 77-day occupation by 1,700 workers of a Ssangyong Motors plant in 2009. It ended when police landed on the roof by helicopter and stormed the plant. In the pitched battle that followed, two workers fell off the roof. At least 28 workers have died from injuries sustained during the struggle.

The KMWU won an agreement with Ssangyong to limit layoffs. When the company reneged on the agreement, Han climbed up an electrical pylon and conducted an aerial protest for 177 days. In 2014, this courageous leader of the working class was elected KCTU president. South Korean authorities, who act at the behest of U.S. capitalism, have sought to lock up Han to suppress the militant working-class struggle in the country.

If the authorities thought the harsh sentence of KCTU leader Han would intimidate the working class, they were wrong. Since the sentencing, there have been mass strikes in health care and shipbuilding.

The KMWU — Han’s home union — staged a general strike of all chaebol [family-owned business conglomerate] subsidiaries, including Hyundai, Kia and Samsung, on July 22. Over 150,000 metalworkers took part. Chaebol workers from around the country demonstrated outside Hyundai headquarters and the Korean Development Bank in Seoul. Another strike is planned for July 26.