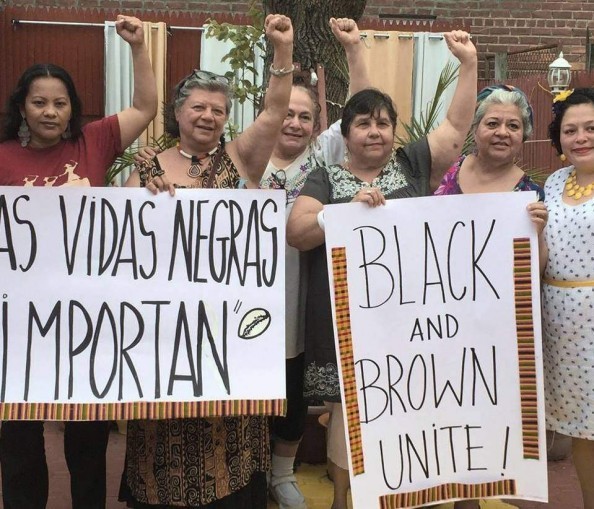 Karl Marx wrote that the capitalist class would create its own gravediggers. Black and Brown folks will assuredly be some of those gravediggers.

The rampant terrorism against Black people by the police in this country has forever exposed their role in capitalist society. The police exist to defend the capitalists’ private property and protect the interests of the bosses and corporations over those of the workers.  Moreover, because racism is essential to upholding capitalism, cops serve as a violent occupation force in communities of oppressed people.

The masses of people have seen the real role of the police, and their “awakening” will lead to powerful, fundamental changes.

Not too long ago it would have been unimaginable that the slogans “abolish the police” or “disarm the police” would resonate with so many people. But now they do. Sooner or later, the idea of abolishing the capitalist system altogether will also arise.

1960s: years of struggle and solidarity

Unity between Black and Brown people in this country is not new.

In the 1960s, the Black Panther Party inspired similar formations among Brown people. In solidarity with the Black Liberation movement, Chicanxs/Mexicans, Indigenous peoples and Puerto Ricans formed the Brown Berets, the American Indian Movement and the Young Lords, respectively, to defend their people against racism.

Asians also organized in this period. For example, the role of Filipino migrant workers in the California farmworkers’ struggles is indelible.

These multinational organizations met, worked and marched together. Great love and solidarity were built. Many Brown people recognized the special role that the Black Liberation movement played and looked to it for leadership.

Today, the struggle against racism and for self-determination manifests itself differently.  A question trending in social and mainstream media is: “Why aren’t Latino victims of police brutality covered like those of Black people?” Bemoaning the lack of coverage of police violence against Latinxs — or posing the question in a way that, even if unintentionally, pits the Latinx and Black communities against each other — is not what is needed.

Latinxs and Indigenous people are being shot and killed in the streets by police terrorists. What is necessary is to expose these cases to show how cops occupy Brown communities, too, and to build Black and Brown unity against the common enemy.

Kenya Downs reported July 14 on the PBS Newshour: “While blacks and Hispanics have interactions with police at rates proportional to their population, according to the U.S. Bureau of Justice Statistics, both groups are overrepresented when it comes to traffic searches and arrests. Hispanics, for example, make up 17.6 percent of the U.S. population but represent 23 percent of all searches and nearly 30 percent of arrests.”

Downs continues: “Among minorities, the rate of police killings for Latinos is second to those of African Americans. As of today, an estimated 94 Latinos have been killed by police in 2016 alone, making up 16 percent of the 585 police-involved killings this year. In contrast, people who are black or African-American are only 13.3 percent of the U.S. population, but 144 black Americans have been killed by police in 2016. At 25 percent, those deaths represent a disproportionate number of officer-involved fatalities compared to the population.”

One of those Latinxs shot by racist police was Melissa Ventura, who was killed in her home in Yuma, Ariz., on July 5. She was shot by two sheriff’s deputies who were responding to a domestic disturbance call. Ventura was the mother of three, including a two-month-old baby. Her family said Ventura had a history of mental challenges. She had opened the door to the police while wielding a knife.

How two grown men could not defend themselves against a woman in distress exposes the cops’ attitude toward workers, especially workers of color, as a threat, no matter what the conditions are.

The heinous acts of terror by police against Latinxs go on. Jasen Scott Ramirez, unarmed and defenseless, was shot and killed at his father’s funeral on June 30 in Douglas, Wyo. It is common for police around the country to serve warrants at funerals, which is blatantly insensitive, to say the least.

Also, the Free Thought Project website reports, “While Native Americans only make up 0.8 percent of the population, they make up 1.9 percent of all police killings.” (Aug. 2, 2015)

The powerful movements of the 1960s and 1970s of Black and Latinx people were manifested as anti-colonial struggles. The struggle against racism takes another form today.

For Latinxs, it is manifested primarily through the struggle of immigrants, who began the powerful upsurge of migrant workers in 2006.  The main issue as portrayed in the media has been the struggle against the deportations and raids that have devastated the communities.

It should be pointed out that not all Latinxs are immigrants. Many have been in the U.S. for decades, even centuries; Puerto Rico was the first direct U.S. colony in the Americas.

Raúl Alcaraz-Ochoa and Jorge Gutierrez wrote a thought-provoking letter entitled “Open Letter to the Immigrant Rights Movement.”  It should be read by every Latinx and immigrant rights activist. (See tinyurl.com/hmx2fj8.) They argue that anti-Blackness is a thread among immigrants and explain why this is so. It comes from a historically different context, from not understanding U.S. culture and the role of capitalist society and its rulers.

The authors point out that a common slogan in the early days of the immigrant rights movement was: “We are not criminals.”  However, they say that while this could be interpreted as being against the Black community, in fact, this slogan specifically addressed the 2005 Sensenbrenner legislation that aimed to criminalize immigrant workers. Nonetheless, these words were easily misinterpreted — unless it was pointed out that the real criminals are on Wall Street.

Another early slogan in the immigrant rights movement was: “We are all immigrants.” More experienced activists pointed out that not everyone in this country is an immigrant. The ancestors of most Black people in the U.S. were brought here in chains, enslaved, against their will.  Later on, this slogan was not as visible, which indicates some advancement in the struggle.

The immigrant rights movement has come a long way since 2006. Despite ups and downs, massive deportations and the failure to win legalization for the undocumented, an important lesson has been learned.

Activists who counted on the Democratic Party learned that strategy was completely flawed.  President Barack Obama has deported more workers than any other president in U.S. history. Despite the well-meaning but weak efforts of some Democrats, the right wing won the day. Activists learned that Democrats would go only so far, however, as they are ultimately beholden to those who write their checks.

Shut the system down!

This lesson has radicalized large sections of the movement, especially the youth. As one Latino youth declared on a placard at a recent anti-Trump protest, “Liberation, not deportation!” This is an advanced formulation: Undocumented workers, especially young people, are here to stay, and will fight for emancipation, not just for papers.

So here is where the gravediggers come in. Black youth and workers have been reminded once again that capitalism offers them nothing. The knowledge that the very institutions and officials who are supposed to “protect and serve” are doing the opposite is a powerful tool. That the capitalist state through the government has defended every killer cop blatantly shows that only the people can find solutions to police terror.

Moreover, immigrants have learned that even though they create great wealth for the capitalists, when there is an economic crisis, they are no longer wanted.

Herein lies the contradiction: Capitalist oppression has created its own gravediggers. Black and Brown people, especially the youth, are pissed as hell and are saying, “We are going to shut sh-t down!”

Black and Brown people together are a force so powerful they cannot be stopped — no matter who has the guns. That unified force is joined by millions of white workers who also see no future in this system and are coming forward in record numbers in solidarity with Black Lives Matter, as they fight for their interests, too — to bring this system down.  A new day is definitely around the corner.