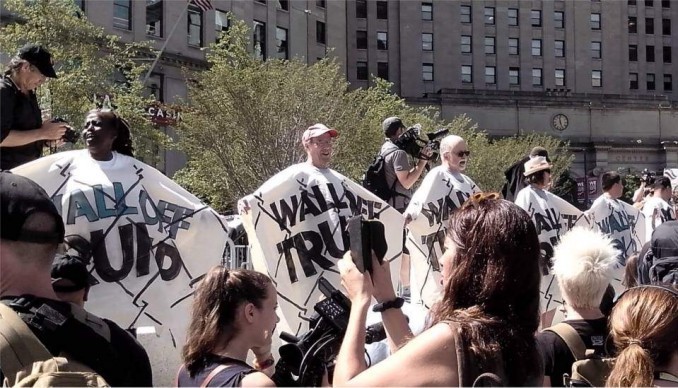 Activists wall off Trump’s anti-immigrant racism at the RNC.

Cleveland – Among the most creative and militant protests during the Republican National Convention was a “wall” of fabric with messages denouncing Donald Trump’s bigoted anti-immigrant call to build a wall at the U.S.-Mexican border. Immigrant rights groups announced in advance that they would link hands and banners around the RNC to surround Trump and his cohorts with a wall made by Mexicans.

As Tania Unzueta, policy director for the #Not1More anti-deportation campaign, explained, “The wall is a symbolic show of communities coming together to build a barrier between us and the hatred that Trump represents.” (Fusion, July 12)

Heavy security protecting Trump backers prevented the protesters from completely surrounding the RNC on July 20. But the wall that began at Public Square stretched for a block along a busy thoroughfare. Other wall sections moved about and at one point got past a security checkpoint. The fabric worn by demonstrators and painted with the slogan “Wall Off Trump” was purchased after online fund appeals raised $16,000 in support of immigrant rights.

Hundreds participated, including Cleveland activists as well as others who had traveled long distances. One after another, immigrant speakers told the media they were “undocumented and unafraid.” The Peace Poets, spoken word artists, got the crowd to sing with them: “The walls that they build to keep us apart will never be as strong as the walls of our heart.”

“We’re here to give Trump the wall he wanted,” said Iván Vargas, an undocumented immigrant who traveled from Georgia in the U.S. South. (Think Progress, July 20)