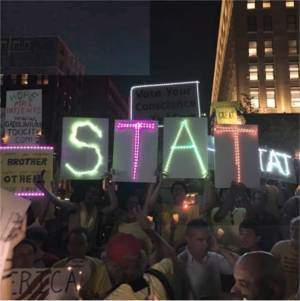 Cleveland – In a powerful response to the anti-Muslim bigotry continually spouted by Donald Trump, a group of doctors, nurses, health care workers, immigrant rights activists and others marched together on the last day of the Republican National Convention. The action was organized by STAT (Stand Together Against Trump), first formed when the Trump campaign came to Cleveland in March. “Stat” is a common medical term used in an emergency situation to mean “instantly” or “urgent.”

STAT describes its membership as “young professionals whose work regularly brings together individuals from races, religions and genders that are frequently insulted and scapegoated by Donald Trump.” For many of the young people who make up the group, protesting in public and marching July 21 in STAT’s first big action was a new experience. But they formed a solid coalition, including Latino/a activists, to push back the racist, Islamophobic and anti-immigrant agenda of the hateful right wing.

After 1,000 people marched with STAT across the Lorain-Carnegie Bridge, a rally was held later that evening at Public Square, the site of many protest activities during the RNC.