Gloria Rubac of the Texas Abolition Movement and Lily Hughes, Director of the Campaign to End the Death Penalty, with the parents of death row prisoner Jeff Wood in front of the Governor’s mansion.

Fact: Jeff Wood is scheduled to be executed by the state of Texas on Aug. 24.

Fact: Jeff Wood has never killed anyone and didn’t know a murder was going to take place.

Fact: Jeff Wood was in his car when his friend went into a convenience store and murdered the clerk.

Fact: Texas already executed the killer, Daniel Reneau, in 2002. Reneau admitted he was the killer. 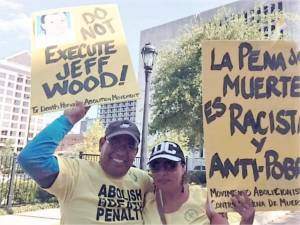 Francisco Mendoza and Martina Grifaldo from Houston traveled to the Governor’s mansion with the Texas Abolition Movement to call for a stay of execution for Jeff Wood.

Jeff Wood’s supporters gathered July 23 at the Texas Governor’s Mansion in Austin to demand Wood’s Aug. 24 execution be stopped. Speaker after speaker demanded that Gov. Greg Abbott grant a stay of execution immediately. A large presence of state police surrounded the mansion and the rally, but the governor did not make an appearance.

Wood was charged with capital murder under Texas’ “law of parties.” That part of the state penal code holds that a person can be charged with a crime he or she didn’t commit if he or she helped or “should have anticipated it as a result” of another crime, like a robbery. Based on law, Wood was sentenced to death.

Wood’s sister, Terri Been, spoke passionately about her brother’s innocence, how he had no idea a murder was going to happen, and how he has suffered psychologically on death row for 18 years. She pleaded with the crowd to write letters to the Board of Pardons and offered samples of how to do that. Her son, Nick Been, who along with his three brothers and other youth founded Kids Against the Death Penalty 10 years ago, spoke eloquently about his Uncle Jeff and why he should never be murdered by the state of Texas.

Wood’s elderly parents were there with other family and church members, together with activists from New York, San Diego, elsewhere in Texas and Poland. Those at the rally persisted through 103 degree heat to write messages to Wood on a roll of paper at the Abolition Movement table. It will be sent to him with hopes the prison authorities will allow their support in.

Gloria Rubac, a leader in the Texas Death Penalty Abolition Movement, brought three carloads of people to the rally. She explained that at this point in time the death penalty is on its way out: “Juries are not sentencing but a few people to death, executions are slowing to a crawl, execution drugs are no longer available, and more innocent people are being freed from death row.”

Rubac added, “Only in Texas is the state going full steam ahead. Jeff Wood must not be executed on Aug. 24 or ever. We stopped Jeff’s execution in 2008, and we’re going to stop it again! The whole system is broken, and we must shut it down!”

The powerful rally was chaired by Lily Hughes, of the Campaign to End the Death Penalty. Other speakers included Scott Cobb, founder of the Texas Moratorium Network.

To help stop this execution, go to SaveJeffWood.com.