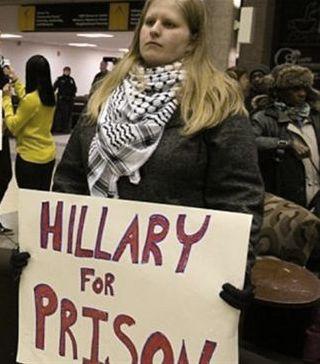 After FBI Director James Comey publicly scolded Hillary Clinton about the “careless” handling of her emails while she was head of the U.S. State Department but did not indict her, the right wing was incensed. To them, Clinton had committed a grave crime by placing her communications with her staff, the Pentagon and Wall Street out of their oversight. By putting her emails on a private server operated from the Clinton mansion, Clinton chose to keep her contacts secret even from the Obama White House.

This is the latest chapter of the longstanding division within the U.S. political establishment as to which faction can best serve the interests of the capitalist ruling class. Neither side has the slightest interest in bettering the lives of the workers or poor, here or abroad.

But to the oppressed people of the world, Clinton’s emails, their content and the decisions that were made while she headed the State Department, bear witness to her many war crimes and crimes against humanity that have caused suffering and devastation around the globe.

An April 2011 email to Clinton from her trusted advisor Sydney Blumenthal detailed the threat, to both French and U.S. imperialist interests, of Libyan leader Moammar Gadhafi’s plans to create a new gold-based currency for use by the poor countries of Africa. The currency would have replaced the French franc and promoted these countries’ development.

The U.S., France and other imperialist countries backed rebel forces against the Gadhafi government with tons of weapons and NATO bombing raids. Other Clinton emails show that she tacitly approved the rebel death-squad “ethnic cleansing,” particularly of Black African residents in Libya. (foreignpolicyjournal.com, Jan. 6)

In October 2011, Gadhafi was brutally murdered by rebel forces, evoking a cruel boast from Clinton: “We came, we saw, he died! (chuckle)” Libya, once the most prosperous African country with the highest standard of living, today remains ravaged by civil war. Hundreds of thousands of refugees, some from Libya, many from other war-torn countries throughout the Middle East and Africa, have journeyed from Libya across the Mediterranean Sea to Europe. Thousands have drowned.

In June 2009, the right-wing military in Honduras, with backing from the country’s elite as well as openly fascist gangs, staged a coup d’état that ousted elected President Manuel Zelaya. Supporting the coup was a clear violation of agreements by the Organization of American States, which the U.S. is a member of. Many OAS countries demanded action to restore the Zelaya government. Clinton’s emails show that behind the scenes the State Department did everything it could to prevent that, and soon openly supported the coup leaders.

“Arming the Syrian rebels and using Western air power to ground Syrian helicopters and airplanes is a low-cost high payoff approach.” This is a portion of a Clinton email revealed by the whistleblower website Wikileaks, written in December 2012. Although Clinton failed to persuade President Barack Obama to send U.S. warplanes into Syria to attack President Bashar al- ­Assad’s government, she spearheaded U.S. imperialism’s effort to overturn that government by supplying vast quantities of arms to the rebels. The resulting civil war has cost thousands of lives and forced millions from their homes.

In 2009, the Haitian Parliament passed a law mandating that workers must be paid at least $5 a day. At the behest of giant U.S. clothing corporations like Fruit of the Loom, Hanes and Levi’s, Clinton’s State Department fought this law tooth and nail. The Nation reported that “a deputy chief of mission, David E. Lindwall, said the $5 per day minimum ‘did not take economic reality into account’ but was a populist measure aimed at appealing to ‘the unemployed and underpaid masses.’” (June 1, 2011)

Clinton stepped up funding for the Bush-Cheney “democracy training” program in Ukraine, from $65 million in 2004 to $5 billion in 2013. She brought on board neo-con Cheney advisor Victoria Nuland to operate the program. But this was not for Ukrainian democracy. Just after Clinton left the State Department, the U.S. sponsored a coup in Ukraine that overturned the elected government, drawing in openly fascist groups like Right Sector and Svoboda.

When eastern provinces of Ukraine defied the coup leaders and their “ethnic cleansing” program, they set up their own republics in Donetsk and Lugansk in the Donbass region. Clinton’s protégé Nuland has spearheaded U.S. support of the Ukrainian regime’s brutal war against these republics, which has cost many lives.

None of these Clinton ventures are crimes in the eyes of U.S. imperialism. Instead, heroes like Chelsea Manning, Edward Snowden and Julian Assange are persecuted for daring to expose the U.S. government’s many crimes. Transgender activist Manning remains locked in a federal military prison for 35 years under conditions so harsh that she recently tried to commit suicide. That effort reminds us that progressives must push so much harder for her freedom.

Wall Street wants the working-class and oppressed people to choose between the racist demagogue Donald Trump and the war criminal Clinton. The only real choice for us is whether to continue down capitalism’s dead-end path, or to struggle to overturn this oppressive system once and for all.