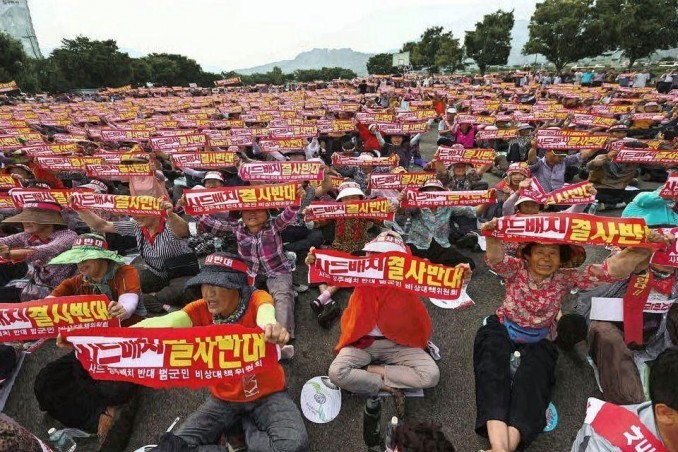 “We oppose THAAD with our lives!” shouted thousands of angry south Korean farmers during a July 13 protest. The demonstration followed Washington’s July 8 announcement that it would deploy the anti-ballistic Terminal High Altitude Area Defense (THAAD) system in the protesters’ county of Seongju by 2017.

Daily anti-THAAD protests have continued around the country. Local leaders in Seongju started a hunger strike and cut their fingers to write the words of the chant in their own blood. Some are refusing to send their children to school. The farmers vowed not to lose the land of their ancestors to THAAD.

In an attempt to appease local sentiment, Prime Minister Hwang Kyo-ahn visited Seongju on July 15, but he never finished his remarks when the crowd of at least 3,000 began pelting him with eggs and water bottles, forcing him to retreat into a government building. Protesters also threw salt, a traditional act to dispel evil spirits.

When Kyo-ahn tried to leave through a back gate, protesters blocked his minibus with a large tractor, holding him and his convoy hostage for six hours.

Seongju, 135 miles southeast of Seoul, is a rural county of about 45,000 farmers who grow 60 percent of south Korea’s melons. The people fear the strong electronic signals from THAAD radar will threaten their health, ruin their agricultural economy and make them primary targets if regional war breaks out.

Washington and its lackey-ally President Park Geun-hye are telling south Koreans that THAAD intercept missiles will protect them from north Korean missiles. But, as protesters point out, placing the missiles in Seongju doesn’t protect the 10 million Koreans living in Seoul, which lies outside THAAD ­coverage.

The U.S. calls THAAD a defense system against what they claim are threats from north Korean missiles. But every show of force by the Democratic People’s Republic of Korea has been to defend themselves against Washington’s escalating aggression toward them.

It is Washington that still refuses to negotiate a peace settlement with north Korea, though the Korean War ended in 1953. It is the U.S. that for more than 60 years has threatened the DPRK with nuclear weapons and is intensifying its military occupation in the region with the aim of “regime change” in the DPRK.

China and Russia say deployment of THAAD will change the strategic balance in the region, undermine their security interests and worsen tensions. The Chinese say the main target of this new Pentagon system is China, not north Korea. The U.S. already employs a THAAD system on Guam and sends satellites over China.

Earlier this month WW wrote: “The Obama administration’s ‘pivot toward Asia,’ together with NATO’s more aggressive stance in Eastern Europe, are sobering reminders that global capitalism’s stagnation and decline are driving the major imperialist powers toward new war crises of their own making.” (workers.org, July 12)

Washington has occupied south Korea since the end of World War II. The 1950-53 war against north Korea cost more than 5 million Korean lives.

Today 28,000 U.S. soldiers are stationed in 50 military bases throughout south Korea. More than 40 joint military drills take place each year. The largest was an eight-week exercise begun in March ­carried out by 300,000 south Korean soldiers and 13 U.S. Navy vessels, including aircraft carriers equipped with ­nuclear weapons, seaborne aircraft and a U.S. guided-missile cruiser.

South Korea’s defense minister stood by the U.S Army Commander when the announcement of the THAAD deployment was made in south Korea on July 8. The south Korean government will provide land in Seongju and build the base for Washington’s THAAD system.

President Park Geun-hye, like her father Park Chung-hee before her, uses the outdated National Security Law to carry out the suppression of freedom of speech, jailing those demonstrating against U.S. occupation and repressive government policies and those calling for reunification of Korea.

In related news, Han Sang-gyun, president of the Korean Confederation of Trade Unions, was sentenced to five years in jail on July 4 for leading protests against Geun-hye’s repressive labor policies. Han was arrested for “inciting violence” during an “unauthorized” protest in November 2015, despite promises of “freedom of speech” in south Korea’s Constitution.

South Koreans once had the highest rate of union organization in the world. But now less than one in 10 workers is unionized. Geun-hye’s repressive labor policies now make it easier for companies to fire workers, roll back benefits, reduce wages of older workers and hire more young workers at low wages.

The KCTU, founded in 1995 during a massive strike against anti-labor legislation, now has 678,000 members. With Han in the forefront, KCTU has led the resistance to south Korea’s growing austerity measures and ruthless government crackdowns on peaceful resistance. Han has led 13 protests and a major sit-down strike, and has called for a national workers’ strike so the government will feel the workers’ outrage.

Even Amnesty International says Han is being punished for being a successful leftist organizer and pivotal leader in labor militancy.