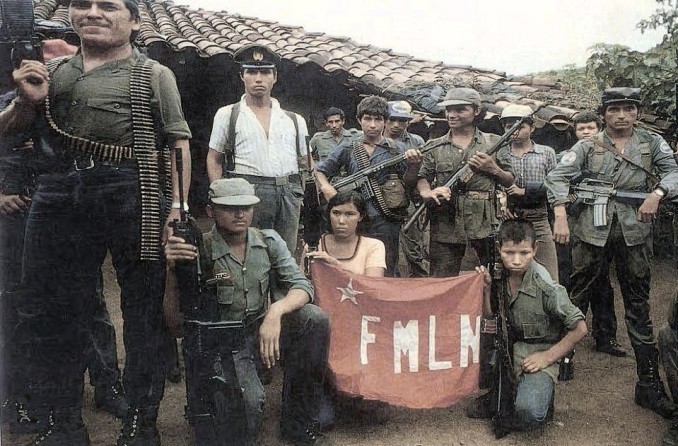 Members of the FMLN guerrilla army pose with the flag of the movement.

By a 4 to 1 vote, the Supreme Court of El Salvador repealed an Amnesty Law that they stated was “unconstitutional.” This July 13 decision argued that repealing the law would put closure to the civil war that lasted from 1980 to 1992 and claimed 75,000 lives, including 8,000 “disappeared,” from the country’s 5 million people.

The roots of this issue stem from Jan. 16, 1992, when, after 20 months of intense negotiations, the government of El Salvador and the Farabundo Marti National Liberation Front (FMLN) signed the Chapultepec Peace Accords in Mexico City, to be monitored and enforced by the United Nations.

The parties agreed to cease the armed conflict and establish a U.N.-appointed “Truth Commission” to investigate crimes committed during the war.

The commission found that human rights violations, which resulted in the deaths and torture of combatants as well as civilians, were caused by Salvadoran armed forces and paramilitary “death squads.” Washington gave financial, military and political support to these ­criminals.

The right-wing Nationalist Republican Alliance (ARENA) governed El Salvador from 1989 until 2009. The FMLN, which led the liberation struggle, became an electoral political party after the peace accords. The FMLN won national elections in 2009, and has since governed El Salvador, which remains a capitalist country.

The Supreme Court ruling has generated suspicion among both civilians and the left, since many believe that the repeal of the law could be misused to carry out a witch-hunt on former FMLN combatants. El Salvador’s President Sanchez Ceren, who was a guerrilla commander of the FMLN during the war, said the court decision “does not address the real and current problems of the country, and far from helping to resolve day-to-day problems of Salvadorans, the court ruling can aggravate them.” (Reuters, July 16)

Whatever hand committed the actual torture and murder, responsibility for the crimes lies on the doorstep of U.S. imperialism, which has been the dominant military and economic power in Central America since the late 1800s.

The local ruling class, a criollo (people of Spanish descent) minority that was maybe 2 percent of the population, owned 90 percent of the agrarian economy and supplied U.S. imperialism mainly with coffee. The vast majority of Indigenous peasants lived in a state of starvation and impoverishment.

In 1932, Augustín Farabundo Martí, who was in the Communist Party of El Salvador, led an uprising that was brutally suppressed by the ruling elite and its military. He and other leaders were executed, and 40,000 Amerindians were killed.

The resistance reemerged in the late 1970s and early 1980s with strikes by workers and students and protests by peasants. Fearing the guerrilla-led revolution would liberate El Salvador as it did Nicaragua in 1979, U.S. imperialism — with support starting under the Democratic Jimmy Carter administration and continuing through Republicans Ronald Reagan and George H.W. Bush — provided weapons and training to the Salvadoran Armed Forces and the paramilitary death squads.

According to author William Blum in “Human Rights, Washington Style”: “The CIA and the U.S. military played an essential role in the conception and organization of the security agencies from which the death squads emanated. CIA surveillance programs routinely supplied these agencies with the information on and the whereabouts of various individuals [who became] death squad victims.”

U.S. military assistance to El Salvador topped $5 billion between 1978 and 1992. Any illusion about a “peaceful transition” to a reform-minded Salvadoran government was soon discarded after a series of atrocities and war crimes by the Salvadoran regime, a few of which are listed here:

• Major Roberto D’Abuisson, founder of both the ARENA party and a U.S.-trained intelligence officer, masterminded the assassination of Archbishop Oscar Romero on March 24, 1980, the day after he called upon Salvadoran soldiers not to follow orders and kill civilians. D’Abuisson was never arrested because of “legislative immunity.”

• The National Guard, along with the paramilitary Democratic Nationalist Organization (ORDEN), carried out a massacre of Salvadoran peasants at the Sumpul River on May 14, 1980, which killed 600, mostly women and children. (Report of the U.N. Truth Commission, April 1, 1993)

• The El Mozote massacre: In three days in January 1981, 1,000 people, almost the whole population of the town, were killed. A monument to the victims now stands in the town plaza. U.S. Special Forces trained and equipped the dreaded Atlacatl Battalion, which was responsible for the massacre.

• The Salvadoran Army First Brigade, which had U.S. advisers, carried out assassinations of 74 “dissidents” between April and July of 1989. (Blum)

The list goes on and on, but the point is that U.S. imperialism, no matter how it pretends to be a defender of human rights, supports and arms some of the biggest war criminals in the world, besides directly committing war crimes as it has in Yugoslavia, Iraq, Afghanistan, Libya and Syria.