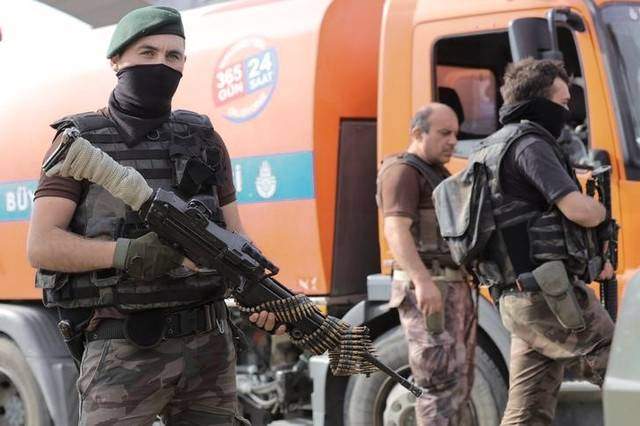 July 18 — NATO’s second-largest army exposed its instability when elements hostile to the regime of Turkish President Recep Tayyip Erdoğan attempted a military coup on July 15. Before the coup collapsed, jet fighters bombed Parliament, tanks rolled through the streets of Istanbul and Ankara, and helicopters attempted but failed to arrest or assassinate the president.

The coup leaders’ politics are still murky. Their program was all generalities about democracy. At this time, the best way to analyze this coup is to look at the reactions of Turkey’s government, its opposition parties and Turkey’s NATO partners.

The Erdoğan regime is exploiting the failed coup by purging over 12,000 opponents in the military, police and courts. As of July 18, he has arrested 103, or one-third, of the generals and admirals as well as 2,875 ordinary soldiers who followed their orders. Some 8,777 officers from the Turkish Ministry of Interior have been purged, mostly police officers. (CNN, July 18) Some 2,475 magistrates and another 400 prosecutors face charges.

The scope of the arrests appears to far exceed actual coup participants. It looks like Erdoğan’s group had its purge list ready before the coup took place. The coup’s faulty execution indicates it may have been rushed in an attempt to preempt Erdoğan’s purges.

Before the coup’s collapse, Erdoğan used a Facetime application on his iPhone to call CNN Turk and appeal to the population, calling members of his Justice and Development Party (AKP) to confront the soldiers carrying out the coup. More than 150 civilians died during the coup, including those who faced down tanks.

Erdoğan has been attempting to increase presidential power by changing the constitution away from parliamentary rule. All indications are that he will use the coup attempt as a pretext to keep increasing his own powers and repress not only the coup plotters but all his political opposition.

All four parliamentary parties — the AKP, an Islamist party; the center-right secular Kemalist CHP; the ultra-nationalist MHP; and the coalition of leftist and Kurdish groups called the People’s Democratic Party (HDP) — on the morning of July 16 pledged to stand together with the civilian government against the coup.

Most Turkish media, including those the Erdoğan regime had censored or threatened with closing, opposed the coup. People opposed to Erdoğan participated in demonstrations defending the government against the coup, according to reports in the corporate media.

HDP spokesperson Selahattin Demirtaş made it clear that despite what he called the “civilian coup” led by Erdoğan since the June 7, 2015, election, the HDP would give no legitimacy to the military coup. “It would be superficial to think a coup will further democracy,” he said. (kurdishquestion.com)

Although the HDP — the most democratic and pro-worker of the parliamentary parties — clearly opposed the coup, HDP offices in three cities were attacked on July 17, reportedly by pro-Erdoğan demonstrators.

In a statement the Workers Party of Kurdistan, which is defending itself and Kurdish regions from military assaults by the Turkish state forces, condemned both the military coup as well as Erdoğan for waging “more of an actual coup” through “control over the judiciary, the implementation of fascist laws and policies through a parliamentary majority, … and the imprisonment of thousands of politicians from the HDP and DBP [another Kurdish party].” (kurdishquestion.com)

A statement by the Communist Party of Turkey on July 15 said that the people should support neither the military coup nor Erdoğan’s AKP. While tensions among different groups within the state and the armed forces are real, the CP wrote, “it is a lie that any of the sides in this conflict represent the interests of the people.” (workersparty.ie)

On July 15 the major European Union countries and the U.S. criticized the coup as undemocratic and gave lukewarm verbal support to the Erdoğan regime, while regretting the instability in this NATO ally.

Later, U.S. Secretary of State John Kerry said that elections are the proper way to settle disputes in a democracy. He added that “it does not appear to have been a very brilliantly planned or executed event. But let’s reserve judgment until all the facts are in.” (Washington Post, July 17)

By July 18, following the coup’s defeat, the U.S. and EU warned Erdoğan not to crack down too hard on the alleged coup plotters or to use the coup as a pretext to wipe out his opposition.

“NATO also has a requirement with respect to democracy, and NATO will indeed measure very carefully what is happening,” said Kerry. EU foreign policy chief Federica Mogherini said Turkey could not join the EU “if it introduces the death penalty,” something Erdoğan has threatened. (New York Times, July 18)

A year ago, when Erdoğan cracked down after the HDP’s election success and the AKP’s setback, neither the U.S. nor the EU criticized or threatened him. The imperialists are acting now to protect neither democracy nor the working-class parties, but their own assets. In Turkey, these are in the military.

Erdoğan accused cleric Fethullah Gulen, a former ally-turned-enemy of being behind the coup plot and called for Washington to extradite him. Gulen, who has set up 130 Islamic religious schools in the United States and in the mostly Muslim Central Asian republics, denied involvement and condemned the coup — after it had been crushed.

Gulen has lived in the U.S. since 1998. Former CIA operatives recommended him for residency.

The Turkish police, intelligence services and massive armed forces, with nearly 700,000 personnel and close ties to both the U.S. and German armed forces, are still the power in Turkey. The U.S. has longer and closer relations with the generals than with political and religious figures like Erdoğan or Gulen. Washington provides more military aid to Turkey than to any other countries except Israel and Egypt.

Erdoğan is no friend of the Turkish workers and certainly is an enemy of the Kurds. He has waged a savage war against the Syrian government since 2011. His air force even shot down a Russian warplane near the Syrian-Turkish border earlier this year.

Recently Erdoğan apologized to Russia for the shootdown. The criticisms from the U.S. and the EU indicate they fear he may follow a more independent foreign policy.

Regarding Gulen, Kerry said Turkey would have to send a formal request for extradition and provide evidence of coup participation, which Washington would then consider. The question of extradition may remain a focus of conflict and pressure between Washington and the Erdoğan regime.