United Airlines’ flight attendants may soon see across-the-board pay increases, some as high as 31 percent, pending ratification of the tentative contract between the company and the Association of Flight Attendants. The contract will finally unite the airline’s 25,000 flight attendants, who have remained under separate collective bargaining agreements since the 2010 merger of Continental Airlines and United. Under the current contract, flight attendants originally hired by Continental are barred from working alongside United hires. (New York Times, June 30)

Workers from United, Continental and Continental Micronesia, the three pre-merger bargaining groups, have protested at airports around the world to demand a unified contract. A statement posted at the AFA website explains: “Management will have the opportunity to divide and distract us as long as we are operating under different agreements. They play games with flying allocation and attempt to keep us at odds with each other. A divided workforce gives management leverage they can and will use against us.” (OurContract.org, Feb. 9) The AFA bargaining committee, with representatives from each pre-merger group, has unanimously approved the tentative agreement. Members will vote to ratify it beginning July 15. (OurContract.org, June 29) 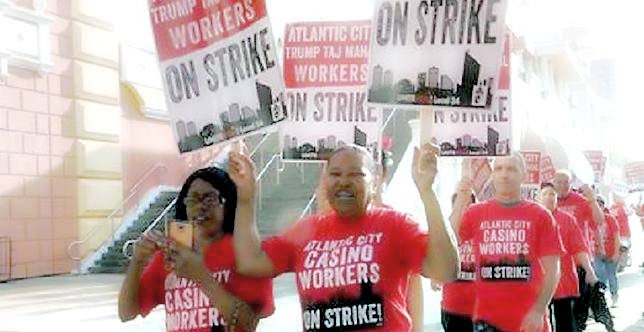 A thousand service workers, including housekeepers, kitchen staff and bellhops, walked off the job July 1 at Atlantic City’s Trump Taj Mahal hotel and casino. “We’ve given them every chance possible to do the right thing,” said Mayra Gonzales, a 26-year Taj chef. “Now we’re going to take it to the streets.” (unitehere.org, July 1)

The workers, unionized by UNITE HERE Local 54, are fighting to recover wages and health care benefits cut by as much as 35 percent when the Taj Mahal declared bankruptcy in 2014. Billionaire Carl Icahn, the hotel and casino’s principal investor and owner as of February 2016, has raked in enormous profits from workers’ low-paid labor. Many are paid only 80 cents more an hour than when they started over a decade ago. (Trump founded the hotel in 1990, but later sold it to Icahn; Trump gets a percentage of the profits for the use of his name.)

A report by corporate watchdog groups Hedge Clippers and Take on Wall Street says that Icahn’s investments in insurance, air travel and software industries have caused some 35,000 workers to lose their jobs and 126,000 to lose their pensions and health plans. It also notes that billionaire Donald Trump, the Republican presidential candidate, is considering Icahn for Treasury secretary, if elected. (Fortune.com, July 5)

The Supreme Court confirmed on June 27 that millions of domestic care workers, the majority immigrants and women of color, are entitled to minimum wage and overtime protections when it declined to hear the case of Home Care Association of America v. Weil. The for-profit home care agencies sued the federal government to overturn a 2015 Labor Department rule that reclassifies home care workers as employees, rather than “companions” exempt from labor laws. (New York Times, July 3)

The 1937 “Fair Labor Standards Act” granted most employees the right to a minimum wage and overtime pay. But racist Southern Democratic lawmakers successfully lobbied to exclude domestic workers and agricultural workers, mostly people of color, from the law’s scope. So millions of home care workers and farmworkers have had to work long hours at poverty wages ever since.

In a July 8 editorial celebrating the decision, SEIU Healthcare Illinois, Indiana, Missouri, Kansas President Keith Kelleher wrote, “For nearly 80 years, women and men of color have been fighting against the injustice baked into our basic workplace rules — and we’re winning.” (ProgressIllinois.com)

Since 1996, U.S.-based retail giant Walmart has expanded operations in China, opening some 400 stores and employing over 100,000 workers. Like its U.S. counterpart, Walmart China does all it can to push down wages and increase productivity, even flagrantly violating China’s robust labor laws.

In a May 20 open letter to U.S. Walmart workers, the Walmart Chinese Workers’ Association urges “further communication and mutual support between the Walmart workers in China and the U.S. in the future.” The association was formed in 2014 to connect Walmart workers across China as “Walmart flagrantly violated the trade union law of China and the five-point memorandum that was agreed to by Walmart and the ACFTU [Chinese labor federation] in 2006. Secondly, in its stores across the country, Walmart has conducted a series of actions to illegally manipulate union elections, suppress trade union activists, and appoint fake representatives for union negotiations.” The letter notes that Walmart workers’ struggles in the U.S. to unionize and demand regular scheduling are not unique to them. “We … believe that your conditions today will be ours tomorrow.” International solidarity against Walmart is the key to victory in both countries. To read the full letter, go to bit.ly/29sHnxG.