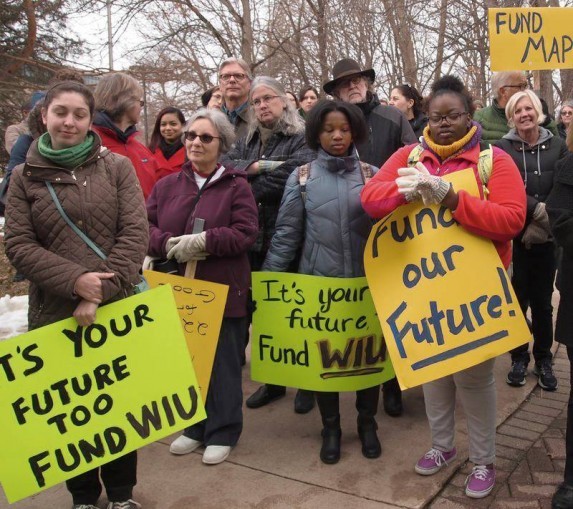 At the conclusion of the spring semester, the Western Illinois University Board of Trustees announced that degree programs in African American and Women’s Studies would be eliminated. Programs dealing with these important areas of academic research will continue only on a downgraded level. Degrees in philosophy and religious studies were also cut. The trustees emphasized the decision could result in employees being retrenched.

Providing a rationale for the nixing of the degree programs, the WIU registrar’s office said no degree in African-American studies, only two degrees in philosophy and women’s studies, and one degree in religious studies were earned by students in the current graduating class.

The decision to remove the programs prompted opposition from both faculty and students. An online petition opposing the abolition of the philosophy program collected 1,656 supporters. Brian Powell, an associate professor of philosophy, said this sent a message that a lot of people “recognize the value of philosophy to the university.” (Chicago Tribune, June 11)

Although the university trustees claimed their decision was not based on financial considerations but on lack of enrollment, the two areas of governance cannot be separated. The overall slashing of assistance programs from both the state and federal governments is a major contributing factor to cutbacks in higher education institutions across the U.S.

In Illinois, the Republican governor and the Democratic leaders of the Legislature have waged pitched battle over the fiscal budget. Until a June 30 stopgap agreement, the state had gone for an entire year without an agreement on spending that impacts education, municipal and social services. WGN-TV emphasized the severity of the crisis, saying renewed absence of an agreement could mean catastrophic results for public and private sectors of the economy, such as hampering investment in the state.

The situation in Illinois involving education and other public expenditures follows a pattern over the last several years of increased attacks on programs that challenge dominant Eurocentric and male-oriented approaches to scholarship.

These cuts in academic programs are not only occurring in higher education but also in public schools. In Chicago during the last four years, the teachers’ union has engaged in strikes and mass demonstrations against the elimination of programs, closing of school buildings and reduction in salaries and benefits for educators.

In the city of Detroit, the periodic imposition of emergency management in the public school system since 1999 has not only brought the district into near insolvency. The elimination of music, art, sports and other programs has severely reduced the quality of the education given to mainly African-American and Latino/a youth.

At Wayne State University in Detroit, that center of higher education for working-class and nationally oppressed peoples has experienced huge budget cuts, prompting the raising of tuition and housing costs. Enrollment is down substantially while the largest corporations in Michigan continue to be given huge tax breaks, which threaten to send the state into monumental budget deficits and consequently more austerity measures.

The attacks on education parallel worsening problems of declining municipal services and infrastructure related to water, public transportation, environmental quality and assistance to low-income families and their children.

Academic programs aimed at the recruitment and quality education of oppressed groups are being rapidly eviscerated under the guise of deficits and budget tightening. Academic programs and curricula designed to correct racist and sexist approaches to instruction and research — programs introduced to the educational arena as a result of protests and debate — are again becoming the subject of ridicule and liquidation.

The need for renewed fightback

States like Arizona and Texas have placed restrictions on what can be taught about nationally oppressed groups in the public education system. Arizona House Bill 2281, passed in 2010, threatened districts with loss of funding if they did not eliminate courses in Mexican-American studies. The actions sparked a movement that insisted those programs be reintroduced into the school system. Teachers and students held classes outside the schools, igniting demonstrations that gained some results in Arizona, Texas and California.

The Atlantic magazine reported: “As the Tucson Unified School District’s governing board prepared to discuss removing Mexican-American studies from a list of classes that would count toward core requirements (seen by many as another move to demean it), nine students rushed the boardroom. They pulled chains from around their waists. Behind a curved wood desk with microphones, they sat in the board’s rolling chairs and locked themselves in place. They pounded the table and chanted, ‘When education is under attack, what do we do? Fight back!’” (July 19, 2015)

These types of academic programs serve African Americans, Latino/as, women and other groups subjected to national and gender discrimination. The only way for the maintenance and reintroduction of the programs is through a process similar to that which originated them between the 1960s and 1990s. Students, backed by their communities, took over buildings and shut down campuses, creating a crisis that school administrations and the broader political establishment could not ignore.

With the growth of people-of-color communities throughout the U.S. and the rapid transformation of so-called “minorities” into majorities, militant action will be required to make public education relevant to these constituencies. The struggle must be combined with the fight against austerity, which is a direct result of the crisis in modern-day capitalism and imperialism globally.