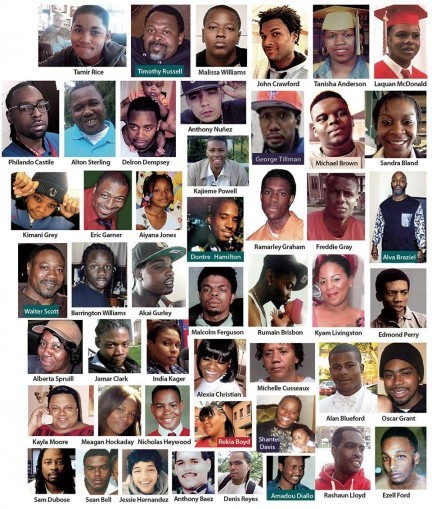 Names and faces of just a handful of those whose lives have been stolen by the police.

July 12 — The time has come to open another front in the struggle against white supremacy. What happened in Dallas on July 7 has in the past, under different circumstances, provided the ruling class, the politicians, the mainstream media and the police with more weapons than they could possibly need to impose a chilling effect on the Black Lives Matter movement and the struggle against racist police terror.

The fall of 2014 was a high point for the Black Lives Matter movement. Thousands of marchers nationwide were shutting down highways, bridges and shopping malls across the country in the aftermath of the police murders of Eric Garner, Michael Brown and Tamir Rice.

But after two New York City cops were shot dead in December 2014, the pressure on the movement was so heavy that some activists canceled protests. It took months for the movement to recover from the political pressure orchestrated by the capitalist establishment.

However, in the aftermath of the Dallas shootings, the capitalist political establishment has so far not been able to freeze out or push back the movement. It’s not that they haven’t tried. The pro-cop talking heads have been all over the media trying to blame and demonize the movement for cops killed in Dallas.

Every politician who could find a microphone was eager to express solidarity with the police, call on everybody to support the cops and admonish the movement to stop the “anti-cop rhetoric.” There’s going to be much, much more of that in the coming days and weeks, especially starting with President Obama speaking in Dallas today at a memorial for the slain cops.

But the day after the Dallas shootings, the streets of Atlanta, New York, San Francisco, St. Paul, Baton Rouge and many other cities across the country, and even around the world, were filled with thousands of protesters demanding justice for Alton Sterling and Philando Castile, the two Black men executed by police last week and caught on video tape.

Since the killings of Sterling and Castile, over a dozen more people of color have reportedly been murdered by the police, including five Latinos. These killings have received little to no national attention, except via Twitter.

Up to this moment, the mass outrage over the latest victims of the police war against Black and Brown people is so deep, and so powerful, that the people are saying by their refusal to suspend the struggle, “No, this time we are not going to allow Dallas to be used as an excuse to blame us and stop us.”

Even high-profile athletes like Carmelo Anthony, Serena Williams and Colin Kaepernick are speaking out. There are also rumblings from below for other high-profile athletes, such as Team USA basketball, to either boycott the Olympics or carry out a symbolic protest at the upcoming Games in Rio.

Why is this so important? In order for the police to wage their war against Black and Brown people, the movement against this war must be marginalized, isolated, demonized and ultimately repressed.

The more it becomes clear that police repression is not only unpopular but will no longer be tolerated by the masses, who face dehumanizing treatment on a constant basis, the more difficult it becomes for the police and the system to kill and incarcerate people of color on an ever-increasing scale. Even the call for disarming the police is becoming more popular among the masses.

The police depend on the political support of the people, or at least public indifference over their actions. The capitalist establishment, which depends on police repression to maintain its rule over the population, understands this very well, and devotes endless energy and resources toward maintaining political support for the police.

The police are acutely aware of this political need, particularly when it becomes apparent that they are losing a critical mass of support.

Racist police repression cannot be ended, once and for all, until the decaying capitalist system, which is becoming more and more desperately dependent on police repression, is ended. It must be replaced with a system that is based on meeting human needs, not exploitation to make profits: socialism.

In lieu of that, recent events indicate that opposition to police repression has reached a turning point.

The time has come to open up a new front in the struggle against police repression. It could be called the “No Support for the Police War on Black People” movement.

At least two conditions are essential to opening such a front:

One, it needs to be based on mass, militant action that is local, but also national and even international. Two, it is absolutely essential that it is not only Black and Brown young people taking to the streets, but white people as well, and not just young people, but people of all generations, nationalities, genders, gender expressions, abilities, etc.

The percentage of young white people who have taken to the streets in support of Black Lives Matter has been rising. This bodes well for the struggle, especially if it becomes consistent and continues to grow.